The Abandoned Lands...A bit of the Wild West remains at Bodie 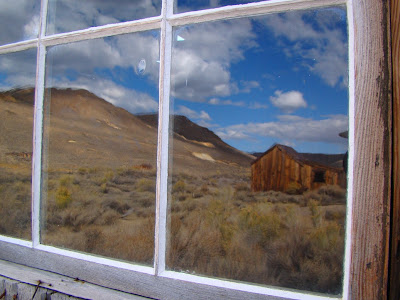 The Colorado Plateau obviously is not the only harsh and difficult environment for the survival and well-being of human beings. For several months I have been producing a series of blogposts about our journey through the plateau country, and we have looked at numerous examples of people trying to make a life from the riches (or lack thereof) of the land, in most cases failing. I'll will return to the theme soon, but in the meantime I am back from our fall field studies excursion to the eastern Sierra Nevada. I have little doubt this will also turn into a series, as the region is fascinating. But today I wanted to introduce you to another abandoned land: the ghost town of Bodie. 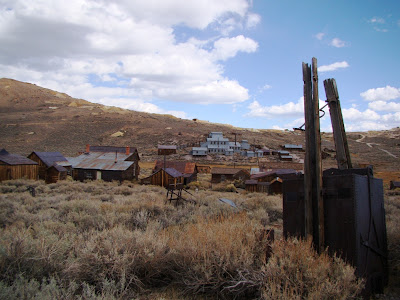 Bodie was one of many towns in the Basin and Range Province of Nevada, California and Utah that appeared as a result of gold discoveries after the end of the celebrated California Gold Rush in the 1850s. It was more successful than most, with a rich ore body that allowed mines to operate for several decades. The initial discovery was made by W. S. Bodey in 1859, but Bodey himself died before benefiting from his "luck". A rich lode was found in 1876 and the Standard Mine (the gray buildings on the hillside in the picture above) ultimately produced several million ounces of gold before closing in 1913. 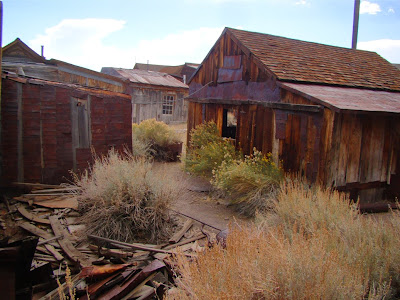 The town reached a peak population of around 8,000-10,000 people and two thousand buildings once filled the valley before several disastrous fires decimated the town, the most recent in 1932. Today less than 200 buildings remain. They were suffering from vandalism and neglect, so in 1962 the state of California stepped in to preserve what remained of the town as a state park. The remaining buildings are kept in a state of "arrested decay". Bodie was declared California's "official" gold mining ghost town in 2002. 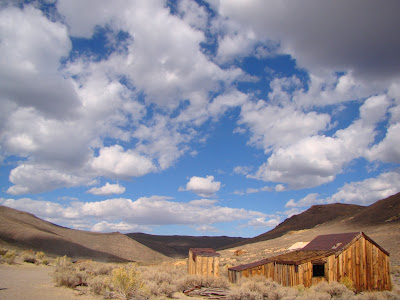 The gold at Bodie was the result of hydrothermal activity in the heart of a volcanic center that was active here between about 14.7 and 8.0 million years ago. The field included at least 20 vents, including four trachyandesite stratovolcanoes. The town lies along the boundary between the deeply eroded Silver Hill and the Potato Peak cones, while the access road to Highway 395 meanders between the Willow Spring and Mt. Biedeman complexes. The sage covered hills reveal little of the volcanic violence that formed this landscape. 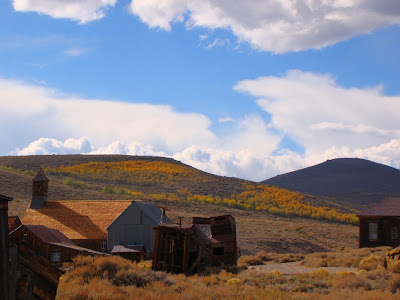 The volcanic complex is related to extensional and transtensional forces related to the northwestward movement of the Sierra Nevada microplate. There are a number of these complexes along the eastern margin of the Sierra, especially at Sonora Pass and Ebbetts Pass. The active Lassen Peak complex provides a modern analog to the appearance of Bodie millions of years ago. 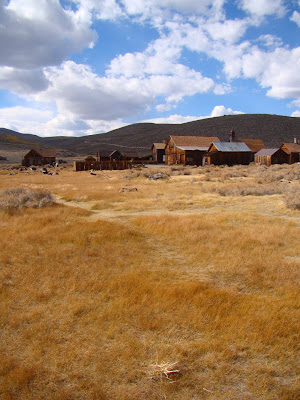 Life must have been unimaginably miserable during much of the year. The town lies at an elevation of 8,000 feet and the winter winds are constant. Snowdrifts are deep. Bodie is often the coldest location in the state with winter temperatures often falling below zero. What relief was there at the end of the work day? The town sported dozens of bars, and violent gunfights were legendary. One of the most famous stories of the town involve a note from a young girl that said "Good-bye God, I'm going to Bodie" (the town took umbrage at the insult and insisted the punctuation was wrong; it should have said "Good, by God! I'm going to Bodie"). 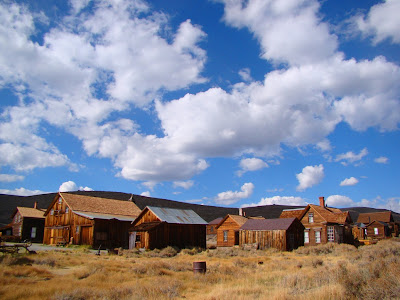 Today the town is a popular state park, and yet wandering the streets produces an overwhelming feeling of loneliness and abandonment. The former homes and businesses contain the artifacts of daily life and photographers will find endless possibilities. But I don't recommend a wintertime visit! 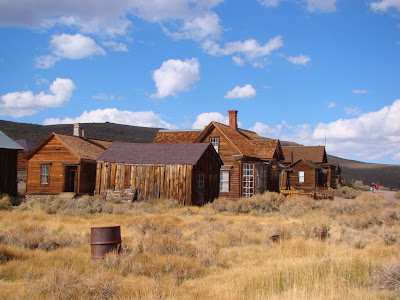 The town of Bodie lies 13 miles east of Highway 395 between Bridgeport and Conway Summit. The access road is paved for the first ten miles, but is a bumpy gravel road for the last three miles. Passenger cars will not have any trouble negotiating the route, however. There is no gas, food or other necessities at the town other than a small museum. The state charges a $7/person fee to visit.
Posted by Garry Hayes at 11:49 AM

you have a great blog here. I´m a bit interested in geology, but far from professional. But I made some trips to volcanic areas with a pair of Swedish geologists.