The Abandoned Lands...A Journey Through the Colorado Plateau: A day in the canyonlands, Part 3 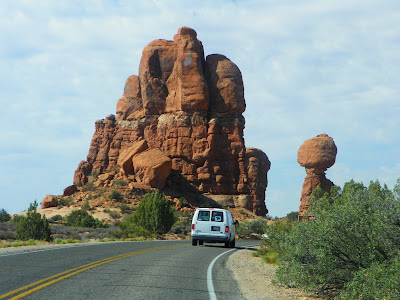 It was a full day! We had explored the Devils Garden area and looked in on Landscape Arch, the biggest in the world, and now we were making our way towards the Windows Section of the Arches National Park. The road through Arches is spectacular; the margins of the Salt Valley Anticline are topographic highs, providing a comprehensive view across the entire region.

I do wonder sometimes whether the uranium miners or early ranchers who abandoned this landscape gave much thought to the sheer beauty of this landscape. They worked in it, lived in it, and struggled to get by for the most part. How did they see it? Does the scenery ever break through the hunger and thirst? 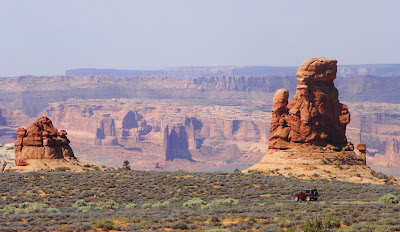 I don't know how they felt about it, but I sure enjoyed having this harsh difficult landscape for a classroom. It helps that the vans had air conditioning, and that there was an ice chest full of iced tea waiting for me when I finished talking. The students were wilting a bit in the heat, trying to wriggle into any shade they could.
The Windows Section of Arches is one of the most popular spots in the park. Parking was near impossible with our parade of vans and we ended up separated for awhile. I spent so much time on the radio with the other drivers trying to get us back together that I only took a handful of pictures while there, so these shots are courtesy of Mrs. Geotripper. 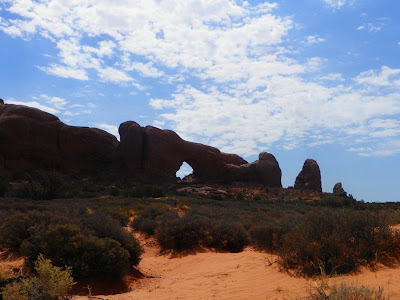 The scale of the Windows is a bit tricky to perceive. That little hole in the picture above? Take a look at the zoom version to see the crowd in the opening (I think this is South Window). 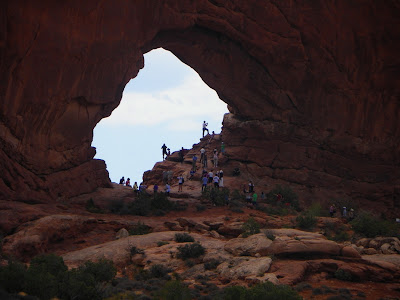 Likewise, take a look at Double Arch...does it seem a bit familiar? You may remember the opening scenes of the movie "Indiana Jones and the Last Crusade" when the a young Indiana Jones discovered grave robbers digging up Coronado's cross. This was the spot where it was filmed. That arch opening is truly huge. 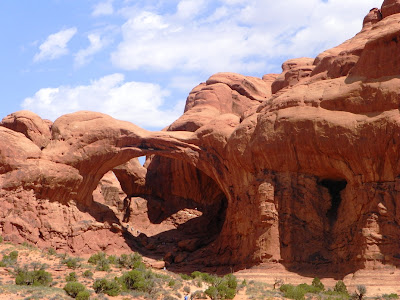 Check once again on the people for scale. The round shape of the arch has another aspect of beauty: it is a wonderful place to hear people sing! On one of my first trips to this spot, a student with a great voice belted out "Amazing Grace". You could almost hear angels singing in the echoes. 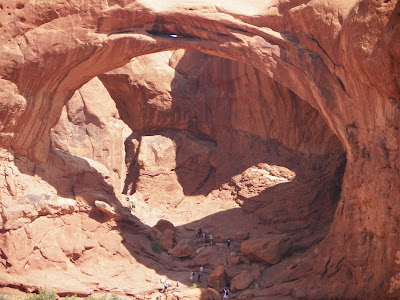 One of the features that occasionally gets lost in the richness of the scenery here is the Parade of Elephants. The Native Americans didn't leave a great many clues of their presence here, and even fewer clues as to their mythology. Did they have stories about the origin of these rocks? I'm sure it would have been an interesting tale around a winter campfire. 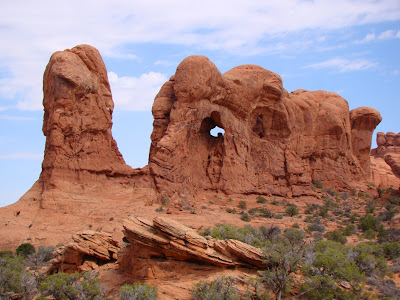 I've called this short grouping of posts "a day in the canyonlands". We were in the Canyonlands Province of the Colorado Plateau, but we hadn't really seen any canyons yet. But our next destination definitely had canyons. It is one of our newest national parks, having been established in 1971. It will be part of the next post...
Posted by Garry Hayes at 1:37 AM

Loving these journeys through my back yard.