The Abandoned Lands...A Journey Through the Colorado Plateau: A day in the canyonlands, Part 2 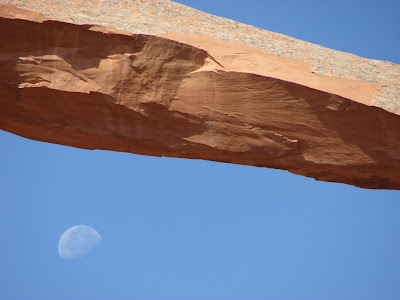 In the last post, we saw the sun rise over the Canyonlands region of the Colorado Plateau, an area that includes Arches and Canyonlands National Parks and Dead Horse Point State Park. We saw all three on this one extraordinary day.

We woke up and Devils Garden Campground in Arches, and in the relative cool of the morning we followed the trail out of Devils Garden to see the largest natural span in existence: Landscape Arch. At 290 feet, the span is as long as a football field.

If you haven't ever seen Landscape Arch, you should bump it up to the top of your bucket list, because I don't think it is going to persist much beyond our collective life times. Since 1991, slabs measuring 30, 47 and 70 feet have dropped off the thinnest part of the arch. The trail under the arch was closed years ago for fear of rocks falling on visitors. The folks at Wikipedia think that it might mean there is less weight being supported by the arch, but I think that the math is increasingly working against the continued existence of the sandstone span. 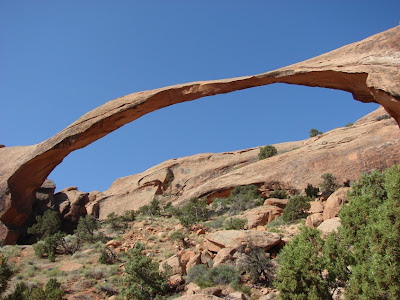 Some of the students who were on the trip might not remember the moon lurking underneath the arch that day. I'm cheating just a little, pulling up my favorite shots from the 2008 trip, since I actually walked a different trail that morning. I was headed to Pine Tree Arch, which is on a short spur trail off the walk to Landscape. 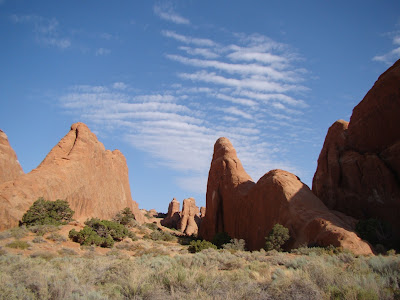 Because of the unique geological circumstances of the Paradox Basin, the park contains the highest concentration of arches on the planet. Most of them occur in the Jurassic Entrada Sandstone, a relatively uniform dune sand that formed in a tropical or equatorial coastal region. The Entrada lies above salt layers that developed in the Paradox basin (a large isolated bay complex that occasionally was cut off from the ocean and dried up) in late Paleozoic time. Salt deforms easily under pressure, and has pushed the overlying rocks into a series of anticlines (upward pointing folds in the rock). When the salt began to interact with groundwater, the salt dissolved and the top of the anticline collapsed inwards, stressing the overlying Entrada, and causing a series of parallel joints to form, like those in the picture above, at the start of the Landscape Arch Trail.
Once the fins develop, precipitation is directed preferentially into the sand-filled joints and fractures, and the constant soaking of the sandstone at the base of the fin causes the solid rock to lose cement at a higher rate than the higher parts of the fin. Eventually a small opening occurs, and slabs of rock fall out, enlarging the arch over time. The arches grow until they collapse, an event that is fairly common, even in human times of reference. Several dozen arches have collapsed since 1971 according to some web sources, but I can't find any original confirmation for the number (that's out of 2,000 arches in the park). It's not that we are running out of arches, though; new ones are forming too. 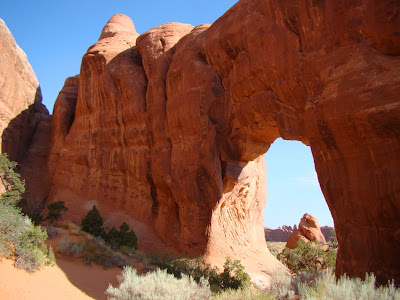 Pine Tree Arch is an attractive little span with a nice view through the opening. One thing about Landscape Arch is the difficulty of getting a good angle on the sky. There is a cliff behind Landscape, and the closed trail prevents access for views upward. I found Pine Tree far less crowded and more intimate, even though it was only a few hundred feet from the main trail. 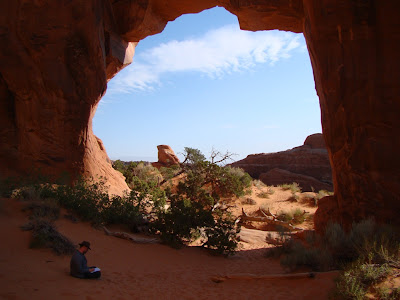 We finished our hike and returned to the vans. We headed to the Windows Section of the park, and the heat...well the heat descended on us like a blanket. Just look how the gang fought for the pitiful amount of shade at our lecture stop! 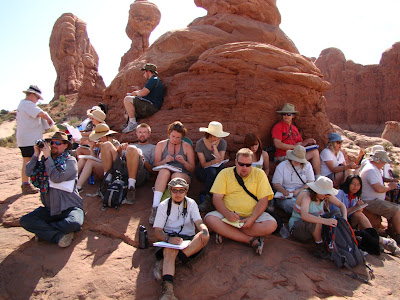 Next, an Indiana Jones adventure! This is a continuing series about what I've called the Abandoned Lands of the Colorado Plateau. It's kind of hard to be describing a very crowded national park as an abandoned place, but it was abandoned already by the Native Americans, the original ranchers, the uranium miners, and when the price of oil becomes prohibitively expensive, I worry it will be abandoned by our society as well. In the meantime, it is a place of beauty and inspiration.
Posted by Garry Hayes at 10:41 PM