I Successfully Predicted Four Earthquakes This Week! And Why Events in Italy Today are Chilling 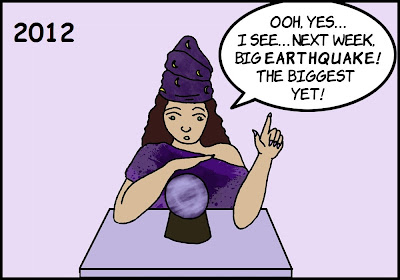 Before anyone gets excited about today's headline, read the following disclaimer:

Allow me to repeat myself...

Now...let's read this together out loud in unison...

"NOBODY CAN PREDICT EARTHQUAKES IN THE SHORT TERM THAT IS IN ANY WAY  USEFUL FOR PROTECTING LIVES AND PROPERTY!" 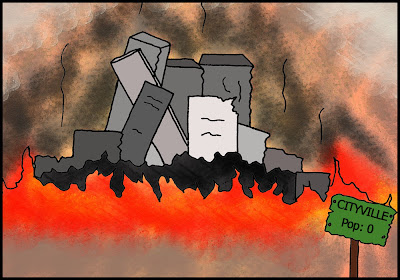 Last week was Earth Science Week, and on Thursday we in California did emergency drills for earthquakes in the Great Shakeout. In conjunction with the Shakeout, I revised a previous post about the myths and misconceptions about California and earthquakes. It was quite long, so you may have missed that I predicted a couple of earthquakes in one of the later paragraphs. They were as follows:
So, how did I do?

How about that? Five for five. 100%. So I am an earthquake predictor par excellence, eh? No. Not at all. I did what any charlatan or fake psychic (and they're all fake) would do: I played the odds. Take a bit of geologic knowledge and set the parameters wide enough, and you will almost never get an earthquake "prediction" wrong. Earthquakes happen in particular regions, and the "background" seismicity will always include some slightly larger temblors.  "Psychics" have been predicting quakes for years to pad their scores on the yearly list of predictions for the new year. They are depending on getting enough easy predictions right so they sound like they have those "special powers" even though they get practically everything else wrong.

Here's what's wrong with this...they act with impunity, knowing they will never pay a price for being wrong. They will scare people without fear of arrest for causing worry and panic.

So what was the chilling news out of Italy today? It was this: six geologists were convicted of manslaughter for failing to predict a terrible quake that killed 309 people. They were scientists who were convicted for not foreseeing the unforeseeable.

This is a huge issue. Self-styled psychics and con artists can act with impunity without fear of punishment, while responsible seismologists and other scientists are put on trial for not being able to predict something that has never been successfully predicted. Something is very, very wrong in Italy, and I hope the geologists are cleared on appeal.

People who are caught in tragedies will always need some way of understanding what has happened to them. They will often turn to a scapegoat as a way of avoiding tragedy in the future. In ancient Israel, a goat (a "scapegoat") was symbolically loaded with the sins of the people and banished to the wilderness. In the culture of the day, when the gods ruled the heavens and controlled the natural disasters that affected society, it almost made sense to do this. In this modern era, it makes no sense at all to make scapegoats out of the scientists who are doing all they can to protect lives by understanding the patterns and probabilities of earthquakes.

That's scary! Are qualified geologists speaking out to the authorities on their behalf?

The article I linked mentioned that 5,000 seismologists and geologists from around the world signed a letter supporting the geologists.

I think that geologists and concerned people worldwide should take action, along the lines of Amnesty International. Those poor scientists. Come on science blogosphere, how can we help?