A Beautiful and Precious Day: Yosemite in Winter

As I noted in this morning's post, I needed to decide whether to be fully prepared for the new semester, or be irresponsible and let a few prep items wait until the weekend. Logic won out, so we headed up the road to get out of the fog for a few hours and see what winter in Yosemite could provide us. What a day! 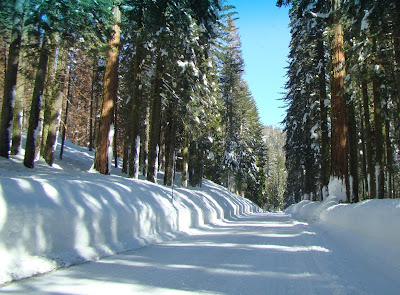 Have I ever mentioned that I drive a Subaru? With the all-wheel drive that I am really happy with? I passed everyone putting on their snow chains and took the Big Oak Flat Entrance road to Crane Flat, which at 6,200 feet was beneath several feet of fresh new snow. The trees were weighted down, and there was a constant rain of snow chunks off the branches and onto the ground (and cars) below. My car didn't crash into anything or spin out (possibly because I was going about 12 mph...). That's one of the nice things about California: we get to visit the snow if we want to, but we don't have to live in it unless we want to. 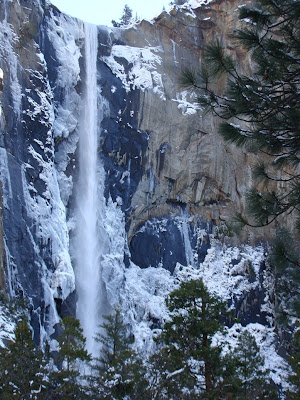 So many of the usual wonderful sights in Yosemite Valley take on a completely different aspect under a mantle of snow and ice. Bridalveil Fall (above) and Cloud's Rest were coated with ice, looking most unlike their summer selves. The furrows on the northern slope of Cloud's Rest are avalanche chutes, and several fresh slides can be seen in the photo (click on the photo to enlarge and check below the two barren spots). 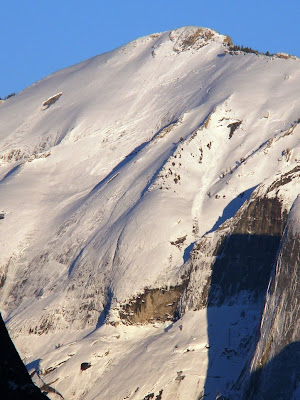 Upper Yosemite Fall had a special treat for us, an afternoon rainbow... 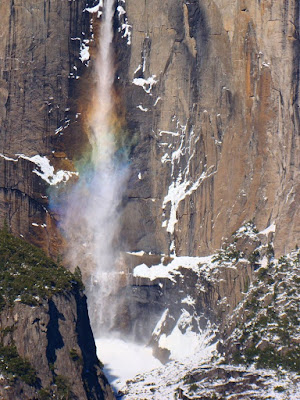 One of the most beautiful trees in the world had barren snow-covered branches, and a few broken ones, but it will be back in the spring. I'll have to take a closer look on a warmer day; I always assumed it was an oak of some kind, but I've heard it called an elm tree (I'm open to corrections, I'm a geologist, not a botanist!). 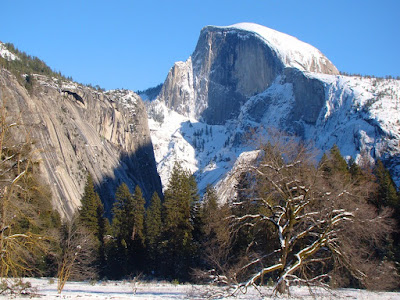 The snowdrifts melt into ponds in places that are normally meadows during warmer seasons. The Cathedral Rocks were nicely reflected on the water in the meadow below. 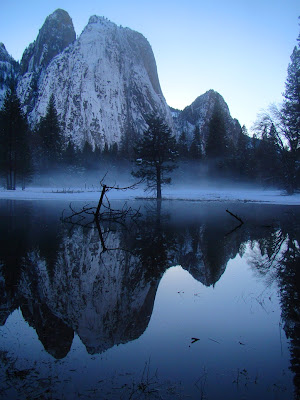 The days are certainly shorter, and our few hours were used up quickly. We needed to leave before the ice on the roads froze, but we couldn't resist the sunset, so we stopped at Valley View and enjoyed the late afternoon sunshine on the granite cliffs.... 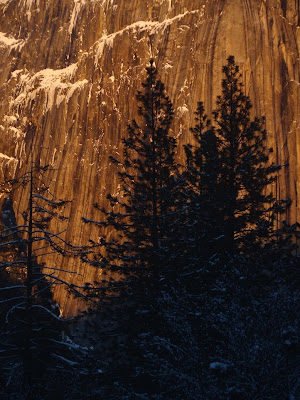 ...and the rising mist on the Bridalveil Meadow, with the face of El Capitan in the distance. Funny how someone's like or dislike of fog can be highly dependent on the setting in which it occurs... 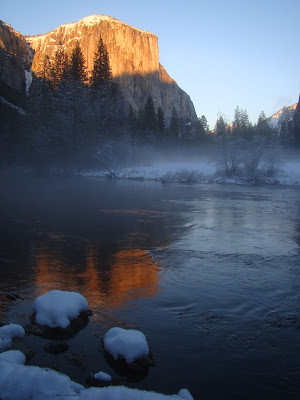 The last gift of our journey was one of the locals hanging out along the highway near the park exit. I know the coyote looks like he is thinking deep carnivorous philosophy, but he was mostly asking for a handout. We waved and moved on, back down the hill into the valley fog and darkness. 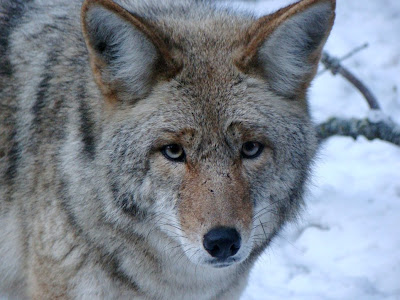 Our national parks are precious places.
Posted by Garry Hayes at 11:50 PM

I love all the pictures. Thanks. I learn a lot from your blog. Not just the geology trip with your students, but also the beautiful landscape of Yosemite itself..

Totally love the shot of the Cathedral rocks!

Six years ago, we took a family vacation at Yosemite over Christmas break. People in CA were telling us we were nuts because it was SO cold and there was SO much snow. When we left ND, it was 10 below compared to 20 something in Yosemite Valley. As far as we were concerned it was tropical! There was also only 4 inches of snow, compared to the foot and a half we'd had at home. :-)

Your shots make me impatient for our trip to Yosemite next month. Lincoln is too far for a day trip so we’ll go and stay for a few nights. I have my fingers crossed for fresh snow.

we visited yosemite in the winter often. LOVE! great photos and i always view it as a lucky sign to have an 'animal experience' with a yosemite coyote. thanks for sharing.

Oh, delightful. That 2nd to last shot is AMAZING. Thanks for sharing. I need to get back there now that it's no longer raining/snowing. =) Thanks so much for the virtual tour.

WOW! This was the perfect pre-semester centering. You got some awesome captures. I really like the white textures on Cathedral Rocks reflection. Have a good term.

Is this the where in ca are we? Hand raised... Yosemite do I win? I am heading up to the valley on Saturday through merced river just to take some pictures, have a great spring semester.

Beautiful photos, Garry! I wish hubby and I were there!!!

wonderful photos... I was there in April many years ago and got caught in a snowstorm.. fortunately had a comfortable cabin to spend a couple of days.. thanks!

Sadly, the coyote was hit and killed after accepting a handout from a car:

I saw the status reports that week and sadly assumed that it was the one who was killed. It's a shame that they get so acclimated to humans; it's a joy to see them, but dangerous for the animals and the humans (no one, including me in this instance, can resist slowing down when a large animal is right there next to the highway).