A Beautiful and Precious Day: Yosemite in Winter 2 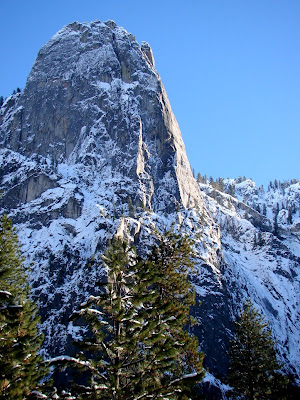 It was a gloomy day Wednesday in the fog of the valley, and a beautiful sunny day in Yosemite Valley. I gathered a few more pictures from the day to add to yesterday's collection. I have lots of pictures from many trips to Yosemite, but I don't think I've ever been there when there was so much snow and ice. Above is Sentinel Dome, one of the slightly lesser known icons of the valley, a cliff that would be a more famous landmark if there weren't Yosemite Falls on the opposite side of the valley to distract everyone. 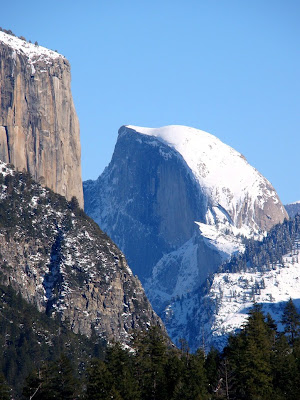 Half Dome is pretty much the most famous rock in Yosemite Valley. When one rounds the corner on the road from Crane Flat, El Capitan and Half Dome make a memorable debut (enhanced a bit here with the zoom lens). Ice has a hard time sticking to the face of El Cap and Half Dome, but the snow nicely coats the summit. 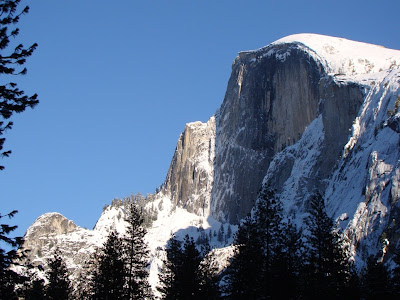 Hmm...I don't think anyone has ever thought to take a picture of Half Dome from this angle...from the middle of the parking lot at Curry Village. I've taken this picture about a hundred times, maybe more, but again rarely with so much snow. There is a single telephone wire that gets in the way of pictures in the parking lot. One has to shift around a bit to make sure it doesn't show up in the image. 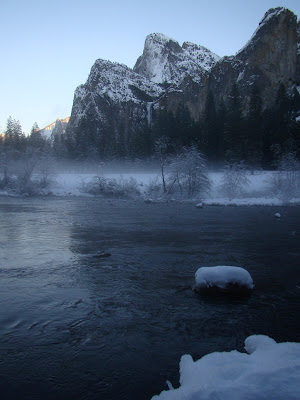 The Cathedral Rocks take on a whole different aspect in the late afternoon shadows. Mist rises from the meadows as the temperature quickly drops. 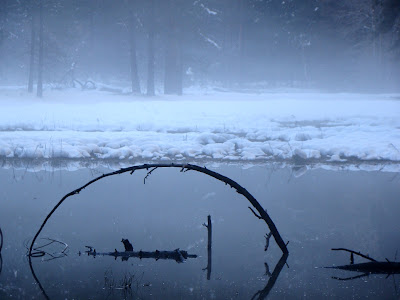 Pools of melted snow reflect the high cliffs above... 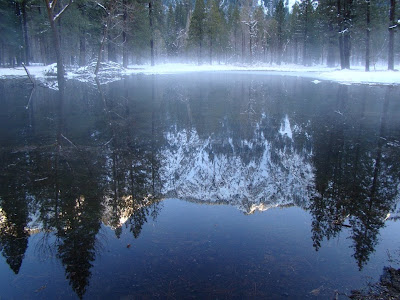 Turtleback Dome is usually visible from the Crane Flat road, but it can sometimes be a little hard to see the glacial erratics scattered across the summit of the dome. Erratics are boulders left behind during the one of the early glacial episodes that filled Yosemite to the brim. The snow highlighted the boulders yesterday (below). 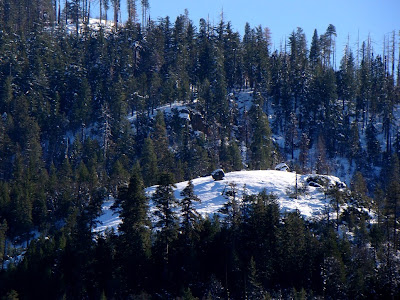 Ice was everywhere. We caught these icicles along Cascade Creek. 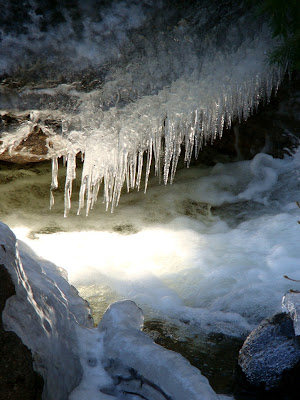 Our national parks are precious places.
Posted by Garry Hayes at 10:24 PM

Our national parks are indeed very precious places. How wonderful it is to be able to enjoy unique winter views - not many people are so lucky.

One of my favorite memories is Yosemite in winter (March anyway) bright sunny days, reflecting off all the snow, and cold nights snow camping. I still use that trip as an example of weathering, because though night was clear as could be there was a near constant rumble of snow and rock falling down the cliffs. The next day snowshoeing up above Yosemite falls there was fresh piles of rubble on the snow.

wonderful images - as always wish i was there. thanks for sharing.

Oh, I love your lake reflection photo! That is gorgeous! I hope you had fun visiting Yosemite. We usually go up there in June, just as soon as school is out!!!!