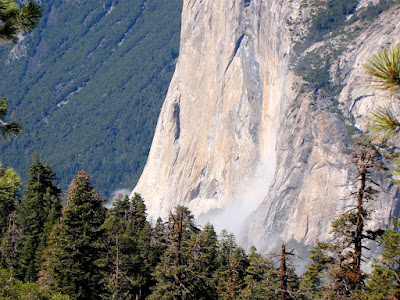 Dust rises from the El Capitan rock fall on October 11

Although not as newsworthy as those of recent years, many significant rock
falls occurred in Yosemite in 2010. The largest occurred on October 11
from the southeast face of El Capitan, midway up the cliff and along the
path of Horsetail Falls. This was actually the largest in a series of rock
falls from that area over several days. There were no associated injuries
despite the fact that these rock falls occurred during the peak of the fall
El Capitan climbing season. The cumulative volume of these failures was
approximately 1,700 cubic meters (5,000 tons).

Another area of notable rock fall in 2010 was the Rhombus Wall immediately
north of the Ahwahnee Hotel. This area was first active in August of 2009,
with subsequent failures in September 2009. Quiet for the early part of
2010, the cliff experienced renewed activity beginning in August, with at
least five rock falls radiating outward from the initial failure point
between August and November 2010. The cumulative rock fall volume over
this interval was 187 cubic meters (550 tons). This area of the Rhombus
Wall is an impressive example of a progressive failure due to stress
redistribution and crack propagation, and presents a unique opportunity to
learn more about this complex process.

Ironically, the most serious rock fall of 2010 was also one of the
smallest. On October 5, 2010, following several days of intense rain,
local children Serra Weber, Carmen Ortiz, and Angel Ortiz were playing on
the talus slope near the Church Bowl Picnic Area when a 1.7 cubic meter (5
ton) rock fell from low on the cliff. The rock fell directly onto Serra,
pinning her and causing life-threatening injuries. Carmen and Angel ran to
the nearby Yosemite Medical Clinic and notified the medical staff, who
responded immediately. Serra was flown to a local hospital where she
remained for several weeks. Serra recently returned to school in Yosemite
Valley, where she, Carmen, and Angel were honored for their bravery during
this event.

Other areas in Yosemite experiencing rock falls in 2010 include the
Porcelain Wall (on the western shoulder of Half Dome), Glacier Point,
Middle Brother, Middle Cathedral, Indian Canyon, and the Merced River
Gorge. In all, there were 59 documented rock falls in 2010, with an
approximate cumulative volume of 2,900 cubic meters (8,500 tons), more than
half of which derives from the El Capitan rock falls. For comparison, the
cumulative volume for 2009 was roughly 17 times greater, at about 48,120
cubic meters (142,000 tons); in that year the large volume was dominated by
the March 2009 Ahwiyah Point rock fall. Small rock falls are much more
likely to occur than large rock falls, but large rock falls represent a far
more important source of rock fall debris. The database of rock falls and
other geologic events in Yosemite, begun in 1857, now documents over 740
events, making it one of the longest and most detailed landslide databases
in the world.

It is very likely that there were additional rockfalls in 2010, but these
events either were not witnessed or went unreported. If you witness a
rockfall of any size, encounter fresh rock debris, or hear cracking or
popping sounds emanating from the cliffs, please contact park geologist
Greg Stock at (209) 379-1420, or at greg_stock@nps.gov, or contact Park
Dispatch. Predicting rock falls is not yet possible, but understanding the
events that do happen is an important step toward this goal. For more
information on rock falls and rock fall research in Yosemite, please see
the Park’s web page: http://www.nps.gov/yose/naturescience/rockfall.htm