Permission to Play: Picking up Rocks in Central California 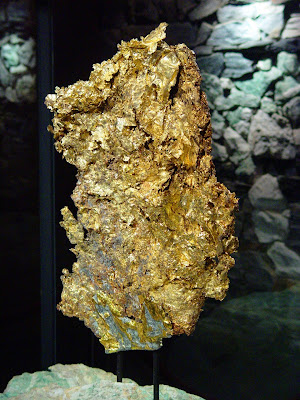 A good place for schist is the Orocopia Mts., south of Joshua Tree N.P. Or you can pick up Pelona schist in the Sierra Pelona, the northern part of the San Gabriel Mts.
Besides schist and gneiss, the San Gabriel Mts. also have anorthosite, a rock that is common on the moon, but rare here on Earth.

Indeed I will be looking to pick up a few pieces of schist next week on a quick trip south!

My specimen of Pelona Schist is from Blue Cut, in Cajon Pass.

You don't need to go South to find schist. Go to Little Yosemite in Sunol Regional Wilderness in Sunol, CA. It's a 1.5 mile hike on graveled road to get to Little Yosemite but I suggest planning to make a day hike out of it. There are also schist outcrops further up the hills along McCorkle Trail and Cave Rocks Road. Oh yeah... Blue and Green. Don't even take a sample, or do, but you shouldn't... Know what I mean?

Hi, I'm Kevin, and does anyone recommend areas that have healthy granite deposites in the CENTRAL VALLY .... I live in Stockton and like large rocks.

Hi Kevin. If you want granite boulders, you'll need to go up Highway 140 towards Yosemite on the Merced River, or up Highway 120 to the Pinecrest Lake area. There aren't many places in the Central Valley with large deposits of granite.

I'm just trying to get my grandson into rock hunting. I live i Fresno. Where is there areas to hunt near here?

Thanks for this great post! We follow Andrew over at Oakland Geology and are excited to come see if we can apply what we're learning over in Mariposa / Capay Valley this spring! Thanks for keeping the information flowing and the passion for rocks :) Cate

Thanks for posting this! We follow Andrew Alden on the Oaklandgeology page. We are coming up to Mariposa / Capay this spring with three young rockhounds / geo-passion people and this page is one of our research pages and so helpful, thanks! Cate

Thanks Cate for the nice comments! Happy hunting!

What other rocks and minerals can be found at Pincrest Lake?

As far as I know, the rock up there is mostly granite with a scattering of volcanic rock fragments from the surrounding ridgetops.