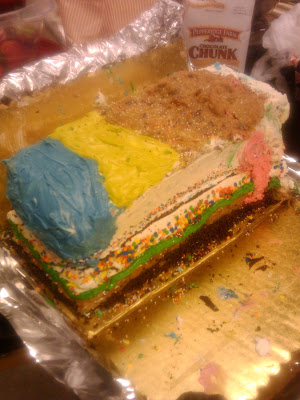 OK, I'm not a baker, I'm not a cake-maker, but I can eat with the best of 'em. This month's Accretionary Wedge, hosted by Callan Bentley at Mountain Beltway, is on a delicious topic, food! Educational food, no less...

I hereby challenge my fellow geobloggers (and any newbies who want to participate) to explore the interconnections between geology and food. This can take any form you want, but I’m really hoping for some edible, geologically accurate models. Yummy stuff that illustrates and informs about earth science? Yes, it is possible!

The end of the semester in my historical geology class is usually accompanied by a social gathering, and an interesting cake is usually in the mix. The picture above was a complicated mess befitting of the subject, an ocean-continent convergent boundary, i.e. a subduction zone. The brown is the region of a magmatic arc, where magmas rise to the surface forming a series of andesitic stratovolcanoes (the red glob on the right is the molten rock!). The yellow strip is the forearc basin, a shallow sea where sediments form thick layers. The only piece I can't make out specifically is the accretionary wedge, unless the blue is not ocean water (ironic, given the name of the carnival). I'm not sure how to interpret the rest of the layers, but I can report that they were tasty!

Edible education took a different turn a number of years ago when I had the chance to see Walcott's Burgess Shale quarry in British Columbia (one of my very first blogs was on the subject). The site is considered to be one of the most important fossil discoveries in the world as it yields up thousands upon thousands of soft-bodied Cambrian animals. This is important because usually only hard-shelled creatures are ever preserved. The Burgess fauna gives us a glimpse of the complete ecosystem that existed at the "dawn" of complex life around 510-515 million years ago.

As one might expect, the quarry is carefully protected, and collecting could actually land you in jail. So we thought it interesting that our guide promised that we would all get a trilobite of our own if we survived the six-mile hike to the quarry. The "trilobites" are below! 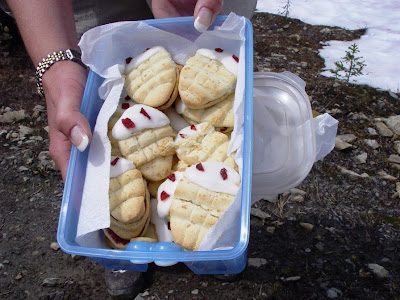 Hahahah tricky guide! I like his style. I can't wait to visit Burgess Shale, two years from now in 4th year field school. Delicious looking cake, and educational too!

It looks like your rising magma is pink.
Lucky you - I've been to the Burgess Shale twice and never got trilobite cookies!

A bit off topic, but wondering what your thoughts are on Yellowstone? Like to get an informed opinion about the "latest" geological story to hit the press.

In 6th grade my daughter made a strike slip fault cake, complete with an offset highway and a sag pond!

Clever! What a great way to ensure everybody gets a trilobite to take home!

And the subduction zone - just awesome!