The Yellowstone Media Storm: We're all gonna die! Oh, well sure, but... Is Yellowstone gonna blow? Sure. Will everybody die? Sure, absolutely. But there is pretty much no connection between the first question and the second. Yellowstone caldera will in fact erupt again some day; it's a forty mile wide caldera with a huge magma chamber miles deep in the crust. That's the reason there are geysers there, and all those hot springs. And everyone will die, eventually. That's kind of a rule about living. But worrying about whether I'm gonna die from an eruption at Yellowstone is so far down my list of concerns that I am more worried about being gnawed to death by a pack of angry prairie dogs. It could happen, but it is highly unlikely. 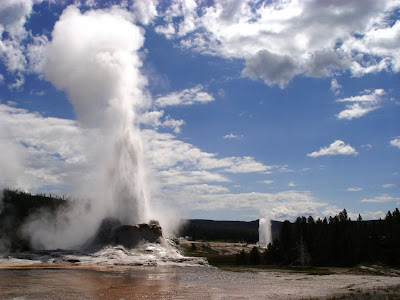 I'm writing on the subject because a commenter asked for my take on the news this week about the activity around the Yellowstone caldera (for the record, "supervolcano" isn't a geological term). My best advice, before I finish with my own two cent's worth, is to check out the Eruptions blog here and here. Erik Klemetti does some excellent analysis of the story and how quickly things can be overblown by a media that thrives almost exclusively on spectacle, and has little use for reasoned discussions of the actual risks.

As I considered the question of an 'informed' response, I had to wonder if I'm not guilty of the same sort of exaggeration and sensationalism of cable news and other media. In my pursuit of educating others, I am not above discussing lurid tales of death and geological mayhem. After all, when I talk about volcanoes in class, I lead with Krakatoa, Tambora and Pompei, and I discuss the potential effects of a gigantic rhyolite caldera eruption such as those that took place at Yellowstone three times in the last two million years (not to mention broadly equivalent eruptions at Valles Caldera and Long Valley Caldera). I have a clear conscience on the matter, because I follow up with a discussion of the actual risk and probability of such events happening to our time; an eruption like the Yellowstone Caldera happens somewhere in the world every few hundred thousand years. Smaller, but certainly dangerous eruptions like those of Tambora (1815), Krakatoa (1883) and Katmai (1912) happen somewhere in the world on a scale of decades. And when these events take place there are clear signals that something is about to happen. 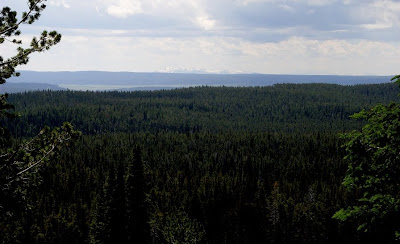 So, the Yellowstone Caldera floor rose around a foot during the last decade (that's the caldera in the picture above; I was standing on one rim, the mountains in the far distance form the other rim). There was an intrusion, a sill, that was filling and inflating with magma. There is nothing unusual or particularly alarming about this, as Yellowstone is an active magma chamber, and such events are normal. Although it has been 70,000 years since the last eruption in the park (and more than 600,000 years since the so-called 'supervolcano' eruption), it could happen again, but any activity would be accompanied by many other phenomena that would provide plenty of information about the scale of the eruption and the hazard to people in the region. My take? Learn about Yellowstone; it is a fascinating place, worthy of our attention and worthy of protection as a crown jewel in our national park system. But worry about the end of civilization as we know it in a vast explosion of fire and volcanic ash? No, there are other problems that we need to think about.
The best quote on the matter? From Max Read at Gawker: "But who do you trust, some kind of "professor," or your overactive imagination?" To which I might add: "But what about professors with overactive imaginations?"
Posted by Garry Hayes at 11:52 PM

Thank you for the response. I figured the "latest" was a lot of hype, but that's why I read blogs like this--they tend to offer good information and informed perspectives.

What-if scenarios are always going to capture the imagination. I think your point about clear discussion of risk and probability is key. This is also an area where the general public often lacks good understanding and mainstream media drops the ball -- as do some folks hyping their latest book on natural disasters and some NGOs fundraising for their environmental advocacy efforts.

Good post! I have a google alert for Yellowstone and all I see is the repeated parroting of the gross speculation that an eruption of this volcano is imminent. That may or may not be the case. If it does happen there is not a lot we can do about it. However, at least one scientist monitoring the volcano does not think the eruption will happen anytime soon.

USGS Scientist-in-Charge of Yellowstone Volcano Observatory, Jake Lowenstern has a totally different take on the volcano that can be seen here: http://volcanoes.usgs.gov/yvo/publications/2009/greatesthits.php

Based on his calculations of three previous super eruptions, another eruption will not be overdue for at least another 70,000 years. But then that is ho hum information that does make profitable headlines.

I lived in the Owens Gorge for 15 years. We talked about the resurgent dome in the Long Valley caldera, what to do if the dam failed and then got on with our lives.

Fascinating information Garry - I went through to the links you posted as well. I have a healthy respect for information, and low tolerance for hyperbole. Thanks for your post!