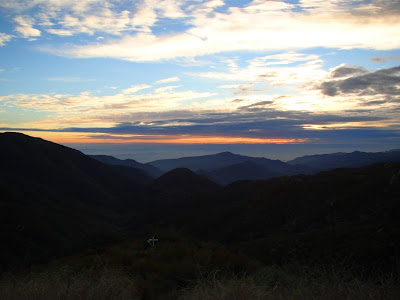 As sort of a postscript to my previous post on the Glendora Ridge Road, I wanted to mention what's visible to our Other California explorers if they look south from the highway. There is a deep dark valley down there...and it's a forbidden valley.

When I was a young man living in the valley below the San Gabriel Mountains, I studied maps of Angeles National Forest obsessively, and I climbed nearly every named mountain peak in the vicinity (with the prominent exception of Iron Peak, aka Sheep Mountain). But there was a blank spot on the map south of Glendora Ridge Road. It was labeled "San Dimas Experimental Forest - No Entry". And that was it. No explanation. In those pre-internet days, there wasn't much I could do to find out what secret and nefarious experiments were being carried out in that valley. To me, it was sort of a national forest "Area 51". And of course, it seemed so unfair that we couldn't explore the area, with the meadows, waterfalls and creeks that must be hidden in the folds of the valley.

When I returned to the region a few weeks ago after a long absence, I found it was not nearly so hard to find out what the experimental forest was all about (the internet is kind of nice that way). It was originally established in the 1930s to study ways of increasing water yields in the lower canyons. The role of the experimental forest evolved over time to become an important baseline region to study the vegetation, soils, slopes, water, air, and fauna of the chaparral plant communities of Southern California. Most of Angeles National Forest has been developed for a variety of uses (the "multiple-use" conundrum), and there are few areas that have not been severely influenced by human activities. The canyon is truly an open-air laboratory, and although it is not open for recreational use, it isn't that difficult to arrange educational tours, or conduct original research using the lab facilities in the lower canyons (with a database of more than 70 years of measurements and observations) .

The San Dimas Experimental Forest is now part of the Pacific Southwest Research Station, which consists of more than a dozen such areas in California and Hawaii. It is also recognized as a Biosphere Reserve by UNESCO's Man and the Biosphere program. For the mysterious forbidden valley of my youthful days, that's pretty cool! But darnit, where is the UFO landing pad?

A vision statement from the National Forest Service concerning the experimental service: http://www.fs.fed.us/psw/publications/documents/psw_gtr104/psw_gtr104.pdf

Sort of like Brigadoon. Maybe the time has come to enter.

Brought back memories of my "mysterious place" as a kid which was a bamboo stand, not necessarily huge - but to a kid it was a "jungle" and wild animals lurching everywhere. Sometimes breaking a mystery can be such a downer.

Back in the Stone Age I was taking some forestry classes at MSAC with the intention of moving on to Humboldt State or Oregon State. I took a three-day wildland firefighting class at Tanbark Flats and did some work experience that included planting some trees along the entrance road to the Experimental Forest. I got sidetracked with a field trip to the Grand Canyon, transferred to Cal Poly and switched my major to geology. But that void in the front range had also intrigued me and it was great to finally get a chance to visit its mysterious interior.

Pretty strange to go back there now and see the big gate. as a kid in the early seventies, we had a cabin in there on West Fork Road. You had to drive the car through a water crossing before the fork. Our cabin was built into a steep hillside, and was an absolutely amazing place to grow up. I had a mini bike, and would ride it all day, or until I had no gas. There was a tiny little cabin that they say belonged to Charlie Chaplin, but I have found no evidence to support that. There was a big fire years ago, and from what rumors I've heard, was the opportunity the forest service needed to get the last of the people out who still lived there. When I go back, I am reminded of a simpler and magical time in my life, but tormented by the fact that my access is denied.

A couple of us may or may not hopped the gate and hiked for 5 plus miles into the forest came across the same water crossing you talked about and came across a couple weird stone structures you know anything about this?

I'm afraid I don't know. I know geologists hop gates with wild abandon, but I wasn't a geologist in those earlier days!