Exploring Yosemite, continued and the Rock of the Day 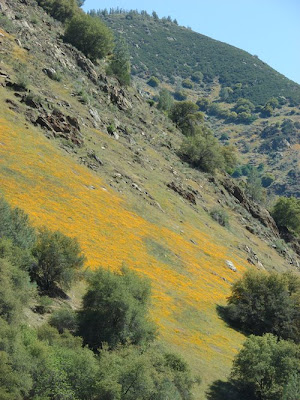 I was going to show some really cool metamorphic rocks along the Merced River on the way to Yosemite National Park, but the view of the rocks was obscured by a bunch of organic things, so you will just have to imagine how beautiful the rocks were....I am headed up there tomorrow for one more field trip. If the falls are bursting, I will have to break down and show some more classic views of the valley in my future updates.
OK, OK, I found some rocks down along the riverbank. These are some folded cherts, presumably part of the Calaveras Complex, a Permo-Triassic accretionary wedge complex that is exposed on the river between Savage's Trading Post and the Ferguson Slide. There is a turnout and an actual geological marker next to the highway that explains the origin of these rocks. It refers to the rocks as the oldest in the Yosemite region, although it is probably just snarky to point out that older rocks (the Paleozoic Shoofly Complex) are exposed two or three miles upstream, and that some Proterozoic rocks have been described in metamorphic roof pendants north of Yosemite National Park. I'm just glad they took the time to make the sign. 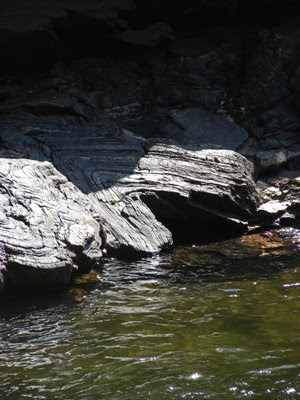 As for snarky, the folded cherts probably don't care too much!

So many great and continuing photos!