Under the Volcano: Changing the Emphasis -Part 3 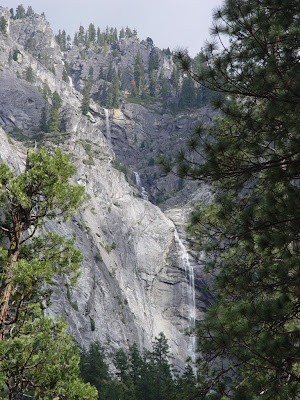 Yosemite Valley is one of the most familiar of our national parks, but this week I have been trying to tease out some of the valley sights that are overshadowed by the famous iconic domes and waterfalls like Half Dome, El Capitan and Bridalveil Falls. In any other setting around the planet, these little-known cliffs and falls would be renowned. This beautiful wispy waterfall is not visible from the Wawona Tunnel View (unlike the features of the last few postings), but instead lies hidden between Sentinel Rock and Cathedral Rocks. It is called the Sentinel Falls, and like before, is one of those relatively unknown treasures that is usually trumped by a stunning view of Yosemite Falls, which lie on the opposite side of the valley. In other words, everyone looks the wrong way. The falls drop about 2,000 feet, although no single drop is more than a few hundred feet. It also evident from the limited discharge that the falls dry up relatively early in the summer. The rock over which the falls plunge is the Sentinel granodiorite, which was described in yesterday's post.