Under the Volcano: Changing the Emphasis -Part 6 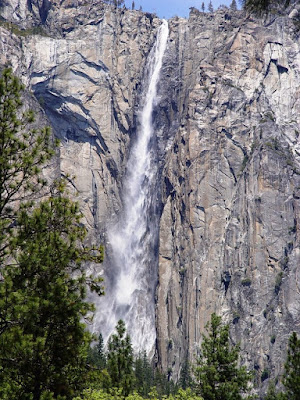 I hope I am not driving the subject into the ground, but I love describing a trip through Yosemite as an exploration of a series of volcanoes from the underside looking up. The rocks, most granitic, formed as magma cooled very slowly over tens of thousands of years, leaving visible crystals that give the familiar speckled look of the rock.

Today's post, continuing the theme of the less recognized sights in Yosemite Valley and other parts of the Yosemite National Park, is a sight that is sometimes noticed by visitors in April and May, but never seen by the vast majority of summer tourists. It is dry most years by June. And yet it is the tallest unbroken waterfall in Yosemite Valley: Ribbon Fall. The more familiar Yosemite Falls include three segments, the tallest of which is the Upper Falls at 1,430 feet. Ribbon Fall leaps nearly 200 feet more: 1,612 feet. The fall lies just west of El Capitan, and the cliff it leaps from is composed of the same mostly unjointed El Capitan granite. It is most easily seen from the parking area on the main park road just east of Bridalveil Fall Parking Lot. No trails approach the fall, not from the bottom, and not from the top.

I photographed Ribbon Fall many times, and thought that it leaped from a sheer planar wall of rock, but in 2005, a low cloud layer brought a different perspective: it lies within a narrow alcove that is outlined by a series of vertical joints. The waterfall is barely visible in the left alcove in the picture below. The cliff on the far right is the west wall of El Capitan. 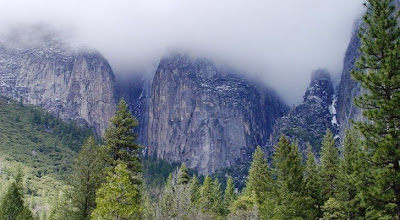 The fall was beautiful last week. Be sure to check it out if you are in Yosemite in the next few weeks!
Posted by Garry Hayes at 10:15 PM

I love this continuing series on Yosemite - so beautiful and timeless (until the next ice age?). Post as many photos of falls and pictures of shear granite rock walls as you want!