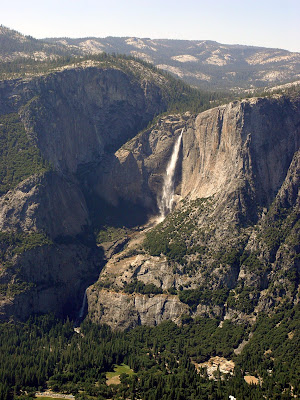 Look at Yosemite Falls from another angle: in this case I was perched atop Taft Point, which is reached by trail from the Glacier Point Road. Like a number of other geological mysteries over the years something bothered me, but never to the point that I solved it with insight and creativity. Other people had to do it for me, in this case N. King Huber. It had to do with the strange cleft of rock to the left of the falls. The trail to the top of the falls follows this declivity, but why is it there? And ask yourself: shouldn't Yosemite Creek be following that canyon? If it did, it would be no more remarkable than the practically unknown Lehamite Falls described in the previous post.

Huber passed away recently, after a long career with the USGS, and later as a populizer of geology for the Yosemite Association. His final book, Geological Ramblings in Yosemite (http://www.yosemitestore.com/Templates/frmTemplateP1.asp?SubFolderID=114&SearchYN=N&t=9&p=3) is a delightful collection of essays culled and adapted from articles he did for the Yosemite Association Magazine. In one of them, he explains the mystery. Yosemite Creek did follow the cleft! And probably for a very long time. But, during one of the last glaciations, a lateral moraine blocked the old waterway, and forced Yosemite Creek over the brink of the sheer cliff where it now flows. The old waterway seems more obvious in a picture where the falls are dry, such as the photo below, taken in October. 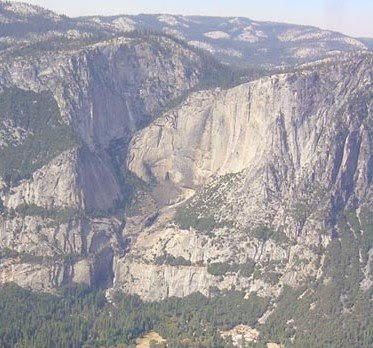 I appreciate the insight of geologists like Huber, and of the way they make the information accessible to the lay population.
Posted by Garry Hayes at 11:36 PM

You know, I vaguely remember something about that from olden years of camping there in the spring rains and snows - as a child, I went there at least once with two geologists (Dad and friend), and I learned what a "hanging valley" was.

I didn't know about Yosemite Falls being dry in the fall before the snows of winter. I wonder if that's a new thing.

This is an interesting and informative series... with, as usual, great photos.

That's a great insight, Garry, thanks for the story. Is there a picture or a map of the moraine?