Under the Volcano: Changing the Emphasis -Part 2 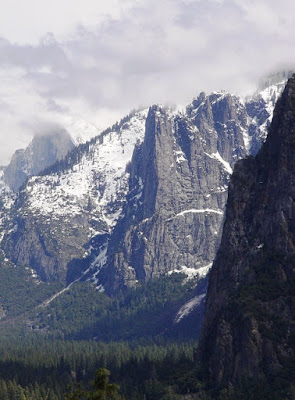 Once again, I continue a tour of the rocks and other features that sometimes get lost in the shuffle of an iconic view from a famous spot: the Wawona Tunnel View of Yosemite Valley (Standing Underneath Volcanoes). Today, we use a bit of well-placed cloud to blot out Half Dome, and snowy slopes for a backdrop, and suddenly a stunning spire comes into focus: Sentinel Rock. This rock is composed of the Sentinel granodiorite, a coarse-grained, dark-gray, biotite-hornblende granodiorite with abundant sphene that was intruded during the Cretaceous period, about 93 Ma. Another reason that Sentinel Rock receives less attention is that stands across the valley from Yosemite Falls, and many people, entranced by the play of water over the cliffs, never look behind to see this beautiful spire (Yosemite Falls tumbles over a cliff of Sentinel granodiorite as well).

Can you imagine the singular fame of the rock if it were any place in the world besides Yosemite Valley? Tomorrow: one of the lesser known waterfalls.... 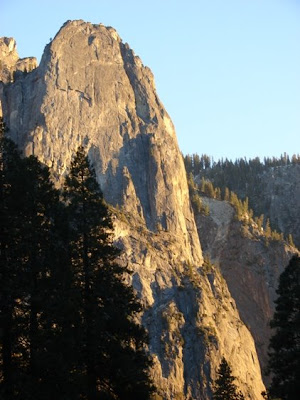