Grand Canyon in the News Again: It's Grand! 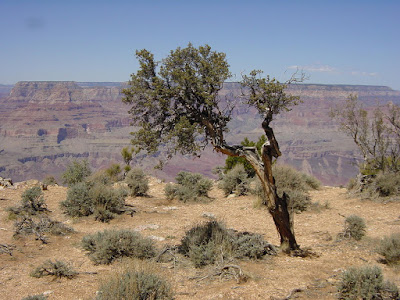 I follow with great interest the latest research on the origins of the Grand Canyon. In some ways, the Grand Canyon is deceptively simple: on one level, the canyon is simply a pile of stacked layers (which makes for the simplest of creation-science narratives). It was recognized very early on that the Inner Gorge hides great secrets: something like 3,000 meters of tilted Proterozoic layers, some three times thicker than the obvious overlying Paleozoic layers. And John Wesley Powell recognized right away the deepest parts of the canyon reveal the very ancient metamorphic rocks that contain evidence of hundreds of millions of years of history that greatly predates any of the overlying sediments.

But as I am always telling my students, the rocks tell only part of the story. Here we stand at the edge of a huge abyss, one of the greatest geological showplaces on the planet, and we can't exactly tell how old the gorge itself actually is. Erosion of canyons removes evidence, and in the case of the Grand Canyon, there are multiple ways of defining the age of the canyon formation anyway.

A flurry of stories a few weeks ago discussed how the canyon was older than previous thought [see Grand Canyon Old, Says the News (But Not the Data) for a discussion]. Another article that I noticed today discusses a Grand Canyon that is 55-65 million years old (Grand Canyon May Be As Old As Dinosaurs, 40-50 Million Years Older Than Previously Thought). The article linked here reports on a paper by Flowers, Wernicke, and Farley (May issue of the GSA Bulletin) in which cooling rates of apatite indicate the presence of a deep canyon throughout Cenozoic time. The article makes it clear that the canyon they are discussing was being carved through the thousands of meters thick Mesozoic cover, and they also correctly point out that different parts of the canyon formed at different times and were only recently integrated into the river system we see today.

A moment of linking produced a story from several years back concerning portions of the canyon, as much as 700 meters worth, that may have been carved within the last 700,000 years when the Colorado Rivers was swollen to many times its present size due to glacial runoff from the Rocky Mountains (New Evidence Of Lava Dam Failure And Fault Activity Supports Theory That Grand Canyon Is Geologic Infant). The lava dams discussed in the article yet another example of the fascinating stories concerning the origin of the canyon.

Great pictures for the imagination. Powell wrote eloquently of the violence of lava meeting water in the canyon bottom. I have talked with my students of previous hypotheses of stream piracy on a monumental scale in the region. What a sight it would have been, to have seen the moment that a river changes its entire course for good! And imagine seeing a 1,000,000 cubic feet per second flood on the Colorado River! The biggest flood on record was only a third of that, in 1884. But such flows may have been common during the Pleistocene. And during all of these events, eyes other than our own species were witnesses: mammoths, mastodons, sabertooth cats, American lions, sloths, giant cave bears, maybe dire wolves, and condors with 11-12 foot wingspans (one of my recent delights was seeing some of Grand Canyon's recently released condors).

The Grand Canyon...grand in so many ways!
Posted by Garry Hayes at 1:01 AM

Love following the logic and you write so poetically about the canyon Garry. I am so glad I found your blog.