Under the Volcano: Changing the Emphasis -Part 7 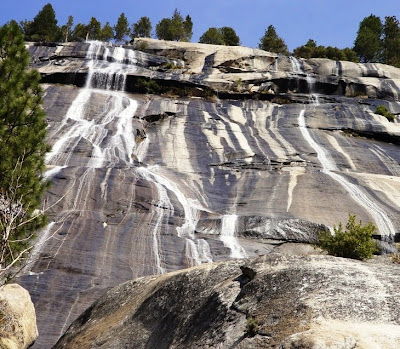 Yosemite Valley is especially stunning because of the striking number of waterfalls, some justly famous, and a number of others less so due to their ephemeral nature and sometimes just from being a semi-precious stone amongst precious jewels (a beautiful amethyst amongst sapphires, if I can make a bad analogy).

Todays relatively unknown waterfall is another that shows up for just a few months in the spring: Royal Arch Cascades. They are most noticiable through the trees behind the Ahwahnee Lodge on the north side of the valley floor. They form a long, sloping millrace down the cliff, dropping about 1,200 feet, before disappearing into the forest on the valley floor.

I actually find them to be sort of unremarkable from most angles, but it turns out that the base of the falls is very easy to access, and they reveal a beautiful mosiac pattern on the cliffs when viewed from that location. You merely need to follow the trail at the east end of the Ahwahnee Lodge parking lot for a few hundred yards, and then scramble up the talus slope for just a few yards.

The falls spill over a cliff of the Half Dome granodiorite which was intruded around 86 to 88 million years ago. In addition to the requisite feldspar, quartz and biotite, a careful search of the rock will reveal little yellowish crystals of sphene. The rock is relatively free of joints, and this leads to the formation of some interesting reverse exfoliation features at the Royal Arches themselves just to the east of the falls (probably a future post).

Nearly four million people visit Yosemite Valley every year. I doubt that more than a few dozen ever see Royal Arch Cascades from the base. Give it a look!
Posted by Garry Hayes at 10:16 AM