Under the Volcano: Changing the Emphasis -Part 5 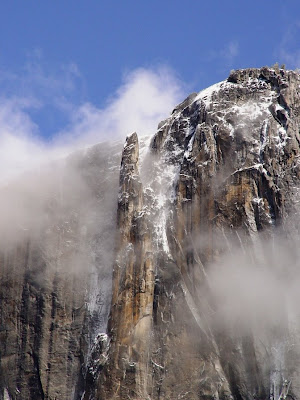 We continue our week's tour of the less famous parts of Yosemite Valley. The Lost Arrow is a fairly familiar sight if you know where to find it, tucked into the cliff just east of Yosemite Falls (see Under the Volcano: Changing the Emphasis -Part 4 ). It is tricky to get some sky behind the rock for pictures, but the clouds cooperated for me in April of 2006. The rock once again is Sentinel granodiorite, and the Lost Arrow is outlined by some prominent vertical joints. As can be seen, the spire is a popular technical climb. 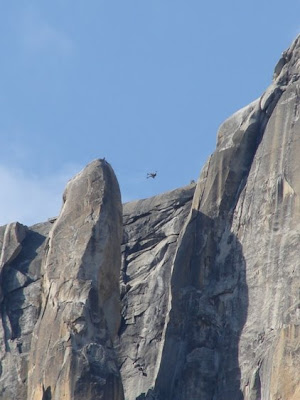 I've not had the pleasure (I'm getting a bit too old and fat to even contemplate this kind of exercise), but if you are wondering what the view is like looking down, check out http://www.100megsfree.com/dew4theq/rock/yosemite/yosemite02.htm.
Posted by Garry Hayes at 1:08 AM

Your storytelling abilities are as amazing as ever. Congratulations on your son's upcoming wedding!

Dude, I am lovin' these posts! As many times as I've been to the valley, some these places I've never seen! I am SOOOO looking forward to getting up there again to see these wonderful spots. Thanks, Garry.