Journey to the Center of the Earth (well, the mantle at least) 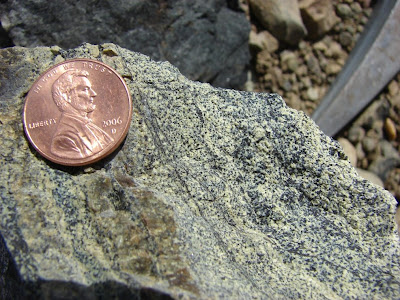 Continuing our trip up Del Puerto Canyon (and into the earth's mantle; see Photo of the Day - Feeling Crushed?), we reached a huge pod of mantle peridotite and dunite in the upper canyon that had escaped the most extensive alteration during the long journey to the earth's surface (in most places the rock is serpentinized). A few unusual minerals are found in the area, including mercury (cinnabar) and chromite (shown above). The chromite crystals are dark and metallic-looking.

The United States imports almost all the chromium that it uses, but in wartime, imports are disrupted, so the mines in the upper canyon were utilized off and on during the two world wars. The mercury was considered far more valuable, given its role in the production of gold during California's Gold Rush of the 1850's. I've heard that the mercury miners could earn a much higher wage mining mercury than they could mining gold, but they also tended to go mad, and die a lot sooner. It's not as if the gold miners had such a great life expectancy, though. We make jokes and complain sometimes about workplace safety regulations, but it is a great deal safer in the mines today than it was 140 years ago. And sometimes, workers even get to enjoy some kind of retirement plan!