The Right Place at the Wrong Time: A January Sunset at Olmsted Point 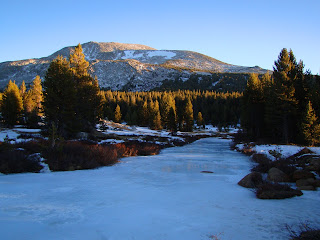 Yesterday I saw sights I never thought I would see: Tioga Pass in mid-January, short of snow but full of incredible beauty. There was so much to see in few hours I had, not the least of which was the sunset. We drove west from the summit of Tioga Pass back down through Tuolumne Meadows and Tenaya Lake. 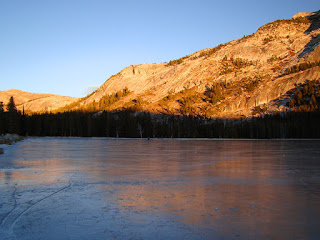 As we saw in yesterday's post, Tenaya Lake is covered with a thick sheet of ice. As the sun approached the horizon, the colors on the peaks above intensified. Being able to walk out onto the lake allows for unique photo angles that are more difficult during the summer. 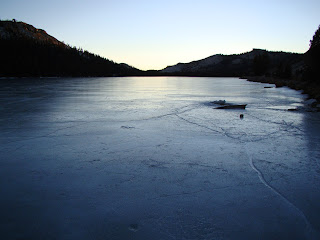 We drove to Olmsted Point to watch the evening drama play itself out. I climbed up on the smooth granite slopes above the parking lot and snapped pictures in several directions. For those who have only seen Yosemite from the valley floor, Olmsted is an incredible sight. To the south, Half Dome rises above the ridge. Yosemite Valley is hidden deep in the shadows below the ridge. 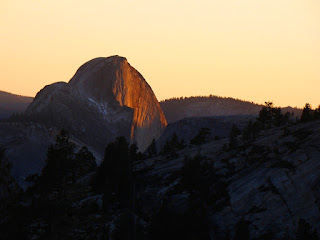 The dominant mountain to the south is Clouds Rest, the highest peak visible from the floor of Yosemite Valley. It is a massive piece of granite that has been scoured by repeated snow avalanches, forming the unique chutes visible from Olmsted. 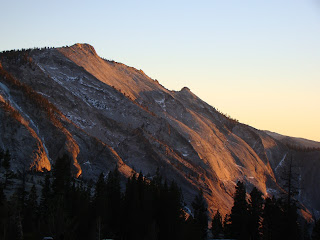 To the north is one of the most famous views of Yosemite, Tenaya Lake with the backdrop of Mt. Conness on the Sierra Crest. The glacial geology is a bit unusual here. Tenaya Lake's canyon barely has any kind of creek, much less a river. It doesn't seem like a big enough drainage to have had glaciers, but glaciers it had. It turns out that nearby Tuolumne Meadows was covered by a massive ice cap more than 2,000 feet thick. Most of the ice flowed down the canyon of the Tuolumne River, but some of the ice flowed over the low divide into the drainage of Tenaya Creek which flows into Yosemite Valley. The consequence is that Tenaya Creek had a much larger glacier than it otherwise would have had. It was Tuolumne River ice that carved a major portion of Yosemite Valley on the Merced River. 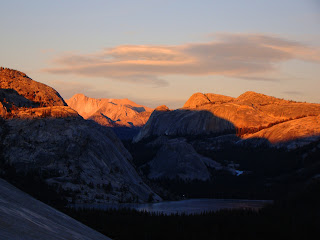 During the summer, the sun sets more to the northwest. Today, just a few weeks after the winter solstice, the sun was setting far to the southwest, and whatever light and shadows are present at that time are quite different from what one would see in the summer. I'll just have to come back up next summer and see how different things are at the opposite solstice (any excuse works for me!). 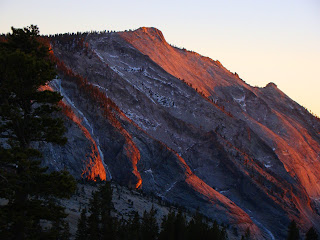 The color deepened, and I took another set of images as the sun settled into the horizon... 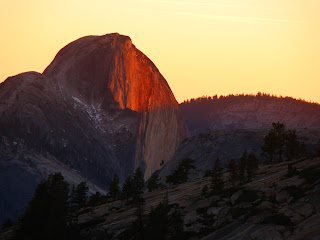 It was a real privilege to be in the High Sierra in the midst of January. With the lack of snow, I worry about our drought and the fires that are sure to come this summer, but today it was strange and wonderful. 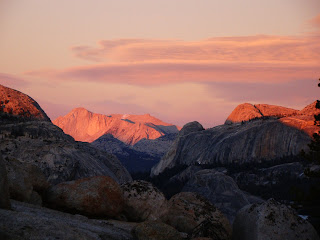 Spectacular light on the mountains from my namesake point.

Very nice images - must have been pretty incredible to watch it all unfold...

Also, did you hear the groaning/creaking on Tenaya Lake? It sounded much like kettle drums on a grand scale. I didn't hear it during the middle of the day on our way up, but it was clear on the way back down at sunset. I'm thinking the temp drop may have been causing expansion of the ice, which was reverberating with each crack...?? The sounds ricocheted off of the valley walls and sounded really incredible!

We heard some of it, but not as loud. My previous post has pictures of some of the ice floes being pushed on shore by the expansion.