Fear and Ignorance winning out over Education and Knowledge: Serpentine Bill Sailing on through Legislature 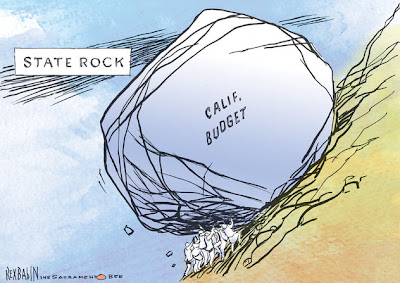 Source: Rex Babin at the Sacramento Bee
It is a real shame that nobody ever thought to ask geologists and teachers what they thought about this under-the-radar attack on a state symbol that is fully appropriate for California. Besides being the subject of a great deal of misinformation about asbestos, serpentine is a unique and beautiful rock which has also been a source for chromium, magnesium, mercury, and nickel, some of which are quite rare in most circumstances. It is one of the few direct clues we have about the nature of the earth's mantle. And there are dozens of plants that grow on serpentine soils that grow nowhere else in the world. But what we are left with in this legislation is a legal tactic to get the state to declare serpentine to be unsafe, perhaps officially opening the door to even more litigation, and a the loss of an educational tool. And as far as I know, no legislator in the senate or assembly cares enough to listen. They are describing the bill as "uncontroversial".

And to State Senator Gloria Romero, who sponsored this useless piece of legislation, I wonder why you were so involved in the declaration of two ghost towns as the "official" ghost towns of the state of California? Have you any idea of how many miners died in those mines? Or the fact that the tailings from those mines continue to contaminate the drinking water of our state to this day? Toxic materials, in your own words, "have no place serving as emblems for the State".

Yes, I'm angry about this. I have a lot of sympathy for the families of anyone who died from lung cancer or mesothelioma. It quite probably affected my own family. But serpentine is the wrong target. Asbestos producers who knew of the dangers, they are the target. Serpentine is "just a rock" (a mineral association, really) that sometimes contains a single form of asbestos, one whose dangers are less clear than the asbestos from the amphibole family (yes, I've read the websites and their claims).

The current status of the bill is here. The Vug.com seems to have the best collection of responses on this issue from geologists and educators (see the links under July 6th). A twitter movement can be accessed at #CASerpentine, if you have a Twitter account. It may be worth your time to contact your assemblyperson, but they don't seem to think this issue is at all worth their attention. If there is to be any chance of stopping this bill it probably is best to contact the governor's office. What bothers me the most is that no geologist or educator was consulted in the crafting of this bill, but lawyers were. And the media outlets seem mostly amused about the issue. Something is wrong here. Please spread the word.
Posted by Garry Hayes at 3:10 PM

I read in a blog thread (can't remember which, sorry) that the purpose of this is to help lawyers. IE, lawyers who represent lung cancer/mesothelioma patients can use "CA removed this substance as state rock because it's so dangerous" as an argument in court.

You said that there was a political reason, there it is. (The blog thread had a reference to the direct quote.)''

I'm pretty sure it was in a Science Blog article, but because of the controversy I'm not currently clicking too much there.

As an aside, I've been reading Assembling Ca, per your recommendation. It's really good. I had to laugh at myself-- I've always been flummoxed trying to figure out what I've been seeing as I drive around Ca. Heh. Remnants of multiple island chains! Sea floors! Volcanism! All mashed together. No wonder.

I read in a blog thread (can't remember which, sorry) that the purpose of this is to help lawyers. IE, lawyers who represent lung cancer/mesothelioma patients can use "CA removed this substance as state rock because it's so dangerous" as an argument in court.

You said that there was a political reason, there it is. (The blog thread had a reference to the direct quote.)''

I'm pretty sure it was in a Science Blog article, but because of the controversy I'm not currently clicking too much there.

As an aside, I've been reading Assembling Ca, per your recommendation. It's really good. I had to laugh at myself-- I've always been flummoxed trying to figure out what I've been seeing as I drive around Ca. Heh. Remnants of multiple island chains! Sea floors! Volcanism! All mashed together. No wonder.

I wrote Bill Berryhill and Jeff Denham and they must be to busy working on the state budget to reply. I saw this on fox 40 a few weeks ago and again on one of the LA news shows. The same argument from both it causes cancer, and that is why we must change it according to the news reports. As you have said before they need to employ a Geologist on their staff.

I wrote the governor asking him to veto, but I haven't lived in California since 1997...