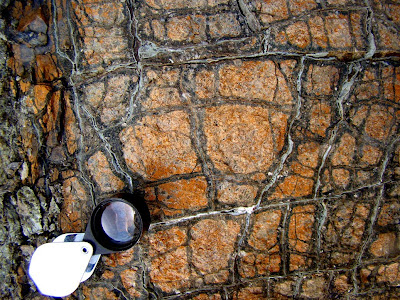 Many thanks to Sheril Kirshenbaum at Discover Blogs (the Intersection) for posting this important development in the effort to maintain serpentine as the state rock of California. Eldridge Moores is the past president of the Geological Society of America and one of the most respected researchers on California's tectonic history, including the ophiolite sequences in which serpentine is often formed. His story was a central part of John McPhee's Assembling California, one of the more influential books written about the state's geology. It was also his research that was cited in the State Assembly analysis for Senate Bill 624, so it is important to know that he opposes the effort to remove serpentine as the state rock. He offers some salient points about why serpentine is both an appropriate and unique choice for California (from Kirshenbaum's blog, working Nishanta Rajakaruna, a professor of botany at College of the Atlantic who has been working tirelessly these last few weeks getting the word out on serpentine):

-Serpentine is closely associated with gold deposits in the foothills, with the California Gold Rush, and California’s history;

-Serpentine is formed by hydration of rocks (peridotite) that come from the Earth’s mantle, the layer beneath the Earth’s crust.

-Principally, serpentines and associated rocks are part of rock suites called ophiolites that are fragments of ocean crust and mantle emplaced in continents;

-Ophiolites are widespread in California–in the Coast Ranges, the Klamath Mountains, the Sierra Nevada, along other parts of the western margin of North America, in the Appalachians, and in Latin America, Eurasia, and elsewhere. Thus these rocks are important for a full understanding of the complex evolution of the California landscape and our planet.

-Serpentines are fairly easy to identify, being mostly shiny black or green. Many serpentines are also weak rocks and prone to landslide. Having serpentine as California’s State Rock calls attention to these issues in many places; and provides a “teaching moment.”

-The asbestos in serpentine is mostly the less-harmful form, chrysotile, rather than the more dangerous form – amphibole. The latter forms by different geologic processes from a variety of rock-types;

-Having children possess samples of serpentine should not endanger their health any more than samples of many other rocks;

-Many rare species of plants grow only on serpentines, including special trees, shrubs, and non-woody plants. California is world-famous for these plants: indeed many grow only in California. These plants also provide a “teaching moment”.

-Serpentines and their original mineral, olivine are increasingly viewed as an ideal repository of carbon dioxide (CO2), because they chemically combine to fix the CO2 in the solid mineral magnesite (magnesium carbonate). This possibility is important for the future of California serpentines, for the US’s efforts to control its greenhouse emissions, and provides an additional “teaching moment” for all of us.

-Serpentine plays an important role in small movements (creep) where serpentine is present along active faults, reducing the hazard of large earthquakes.

-“Defrocking” serpentine as the California State Rock is not going to make any of these issues go away. It will, however, make it more difficult to communicate the many issues, both bad and good, to the public in California.

Time is very short; if you are concerned about this issue, a letter to your senator, assemblyperson, and governor is critical (and California teachers, geologists, biologists, historians, environmental scientists, and everyone interested in good science should be!). Please, always be polite, positive and emphasize the educational values of keeping serpentine! It's easy to be angry about something that is important to us, but not well-understood by many others, including legislators. They need to know the issues involved (and there are many).

Today's photo shows ultramafic rock in Del Puerto Canyon that has been partly serpentinized. The locality was a chromite mine that operated during both world wars. Many important ores have been mined from serpentine and associated ultramafic rocks.
Posted by Garry Hayes at 9:14 PM