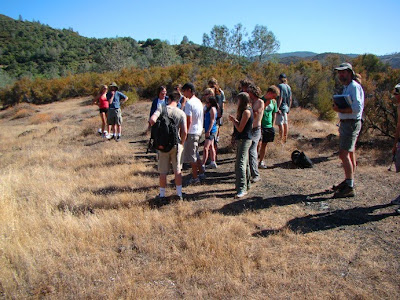 I got to borrow a class today. This was important for me in this most unusual summer. California's budget crunch left me with no classes to teach over the summer months for the first time in years, and I was going through withdrawal pains.

I wasn't really aware of this at the time, as I had immersed myself in a grant writing project, some website design, and then out of the blue, one of the weirdest political controversies I've ever been involved with (it's true, in response to your unspoken question, that I do not know how to relax). So, when I heard that my old employer, Santa Barbara City College, was running a field studies trip through my area, I jumped at the invitation to join them for a few hours. They let me talk about the Mother Lode and California Gold Rush history at one of the old mines near Mariposa. It was like a breath of fresh air for me (and a touch of minor misery for the students forced to listen!).

This month's Accretionary Wedge is an introspective set of questions about the Geoblogosphere, and is proposed by Dave Bressan (History of Geology and Cryology and Co.) and Michael Welland (Through the Sandglass). A lot of geobloggers have responded, and I have been much impressed by their perspectives. I'm looking forward to seeing them in one place, in case I missed something. The wide-ranging questions were paraphrased as follows:

What role the geoblogosphere should play going forward? Should it have a role in disseminating research? Should geoblogging be factored into academic- or business- employees’ evaluations? Can, and how should, the expertise and enthusiasm of geobloggers be harnessed to effectively reach and educate the broader public? In short (again, as I interpret the issue), what do you see as the purpose of geoblogging and the geoblogosphere?

Geologists are story-tellers. Sometimes those stories take the form of peer-reviewed research, sometimes it is in the form of a classroom lecture, and sometimes it is a story told around a campfire, or over a round of beers. The geoblogosphere is a wonderful new forum for geologists and teachers to tell their stories.

I don't know that the geoblogosphere has a particular monolithic "role", but I do see it as having a purpose. It is a vast anarchy, much like gaggle of competing stories told over the campfire, but with an important distinction. Almost all the geobloggers I read seem to be oriented towards education, and even if that is not their main motivation, it is the effective outcome. I turn to the geoblogs for a quick informal perusal of the latest research, immediate analysis of geologic events (on-site reports from Kilauea's latest outburst, for instance), and to learn about places I may never have the chance to explore for myself...in all of its crazy disparate threads and pathways, it is an educational tool.
Sometimes (in the real world), I will be discussing an outcrop or site at a national park overlook, and occasionally a few tourists will start listening in, even asking questions. In the same way, lots of non-geologists arrive in the geoblogosphere when a search engine lands them there. They are looking for more information on whatever rumors are sweeping across the world of Twitter and texts (2012, anybody?), and geobloggers are often the ones responding to these things quickly. The geobloggers often provide a more nuanced scientific response to geologic events and political issues than the mainstream media, and there is great value in the tendency of geobloggers to critique (and sometimes severely demolish) bad scientific writing. This is seen during major ongoing disasters like earthquakes, tsunamis, oil spills, and global warming, and in stupid local issues such as the weird dust-up over serpentine in California.
Can it be harnessed? In the sense of organizing, it already is to an admirable degree, due to the efforts folks like Chris at Highly Allochthonous, and Stratigraphy.net, with their newsfeeds. If there is anything further to be done, a good start would be for all geobloggers to have a link to one of these feeds posted prominently on their blogs.

I had a great time out in the field today, working with the college students to better understand the origin of the Mother Lode, and of the beautiful exposures of serpentinite at the mine site. Telling stories. And when I can't be in the classroom or in the field telling stories, I tell them and read them in cyberspace instead.
Posted by Garry Hayes at 10:16 PM

Guess I need to check out more geoblogs, I already really like the few I read. It is about education. Sure glad you got a fix with this class. I know how much I miss it.

As someone on the outside looking in, I think the geoblogosphere needs to remain detached from employers. Don't get me wrong, there is value in the writing you do for "the blog." By happenstance, the geoblogosphere audience has an educated background (most are geology students or rockhounds looking for answers beyond basic earth science questions) and an educational focus is a part of the process for those that have an academic career. Both in front of and behind the podium. There is nothing wrong with that. But by changing your audience, you risk losing curious readers, readers only interested in being entertained and educated in an honest way which would be negated by writing to please your boss. A jounalist's main goal: Write for your Audience. Your job is to find and audience and to write for them and not your employers. PS: Peer review is a good thing.

Thanks for writing Tim. Anyone who blogs for their employers would certainly need to be open about it. I don't, I really do this for the fun of education in and of itself. And peer review is a good thing, in research, but sometimes in blogging too (people aren't afraid to correct my mistakes!).