Worried About Being Ready for the Big Storm? Let's Have a Practice Flood! The Tuolumne River Today

Okay, this is a bit odd. There is a lot of news about the coming atmospheric storm that will strike California this weekend, with the possibility of some truly epic (in the bad way) flooding across central and northern California. Some parts of the Sierra Nevada are facing the prospect of a few feet of rain at elevations of 10,000 feet or more. This may melt the newly fallen snowpack and produce flooding at an intensity not seen in this region since 2005 or 1997.
So I go out this morning for my customary walk along the Tuolumne River Parkway trail (where the river leaves the Sierra Nevada and flows into the Great Valley). And instead of the 200 cubic feet per second discharge I have been seeing for the last few weeks/months/years (it's been a long drought), there is a flood going on. The discharge right now is 8,080 cubic feet per second, which is the highest the river has been in at least half a decade. It's just short of official flood stage.

But the storms haven't exactly arrived yet! There has been a lot of snow and rain in the last few days, but nothing that can explain the river this morning. In the picture above, the nearest channel isn't normally a channel at all. It's a dead-end slough, a spot that collects River Hyacinth and garbage. But right now it is a raging torrent. The hated invasive hyacinth is being flushed downstream. That's a very good thing. 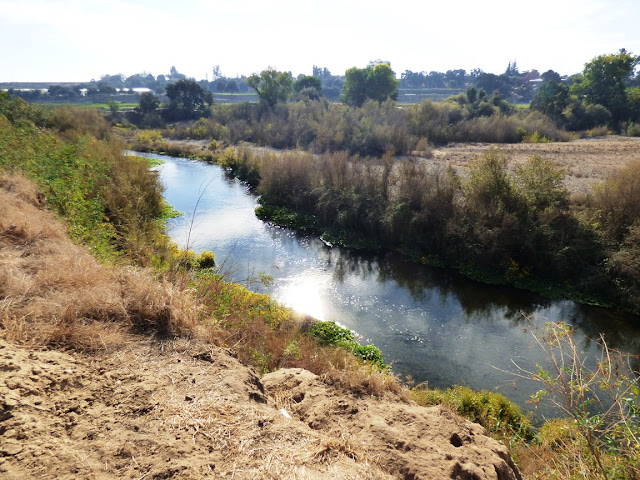 The picture above is a section of the floodplain that has been dry for as long as I've been walking the river trail (the picture is from October 2015). Today it was completely inundated. 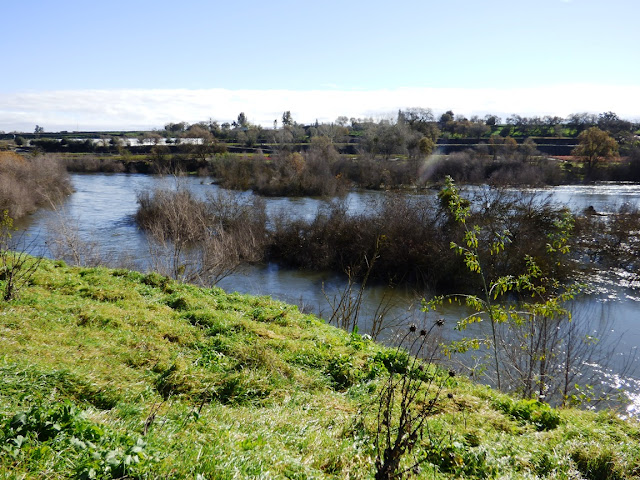 So what's going on? Why is there a flood going on today a few days before some serious stuff starts happening across California? The explanation is pretty simple, really. The authorities are clearing space in Don Pedro Reservoir in preparation for the expected runoff from the storm this coming weekend. 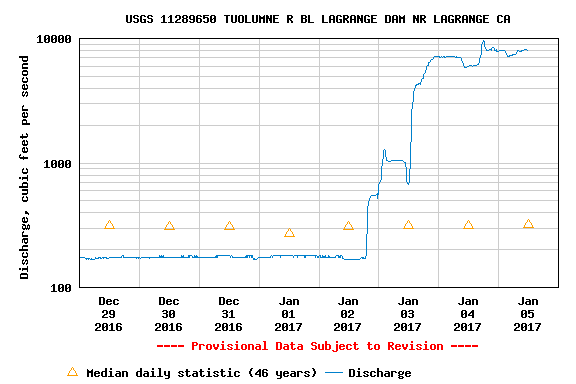 There are three main water storage reservoirs in my immediate area, the New Melones Dam on the Stanislaus River (capacity 2.4 million acre feet), Don Pedro Reservoir on the Tuolumne River (2.03 million acre feet), and McClure Reservoir on the Merced River (1.02 million acre feet). The story of today is told by the present levels of each: McClure is at 47% of capacity, and New Melones is at 27%. There is little danger of these two filling during the coming storms. But Don Pedro is sitting at 74%. And two smaller reservoirs upstream, Hetch Hetchy and Cherry Lake are at 89% and 88% capacity respectively. The level at Don Pedro is not dangerously high necessarily, but if the storm plays out as expected, things could get a little too much like conditions in 1997 when the reservoir filled unexpectedly and for a short time was flowing uncontrolled through the emergency floodgates and over the adjacent weir. Downstream towns like Modesto were hit with the highest flood levels ever recorded (just imagine 60,000 cfs instead of today's 8,000; I don't have to imagine: I saw it, and it was astounding). 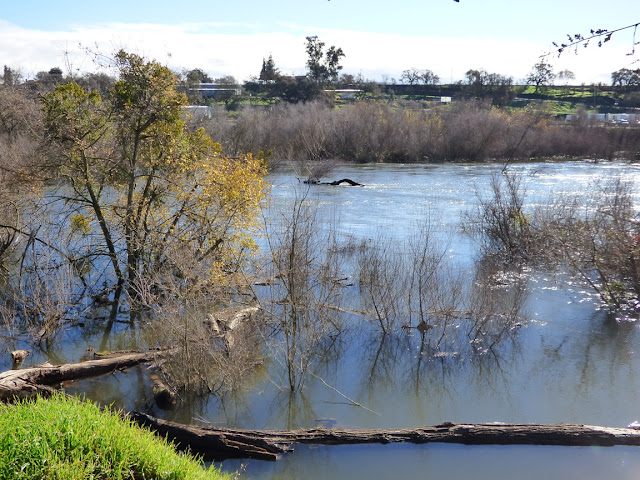 So, Mrs. Geotripper and I had a treat today, the chance to see a "good" flood, a flood on a sunny day that is probably not going to cause too many problems (although fast cold running water is always dangerous; we saw kids at the town park getting too close to the river). I gave up on my plans to clean up the geology lab in preparation for the new semester, and we took off up the river to see what else was happening out there. 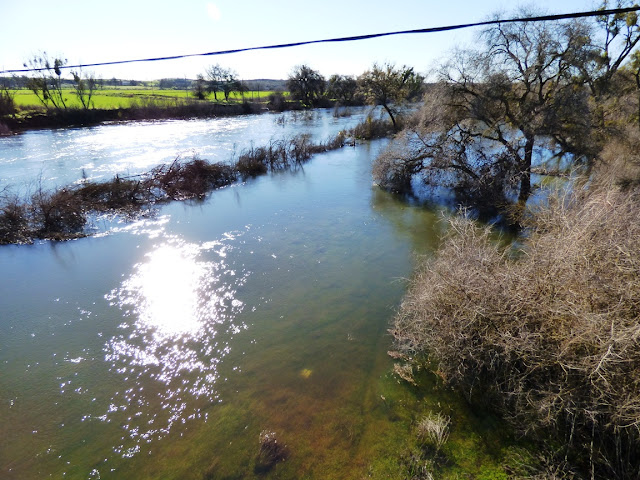 At Roberts Ferry Covered Bridge (yes, we have covered bridges in California), the river was flooding the meadow on the north bank. In the picture above, the normal channel is to the left, beyond the line of willows. Everything in the foreground is normally dry. This particular bridge, originally dating back to the 1800s, was severely damaged in the 1997 flood and was replaced by current structure. 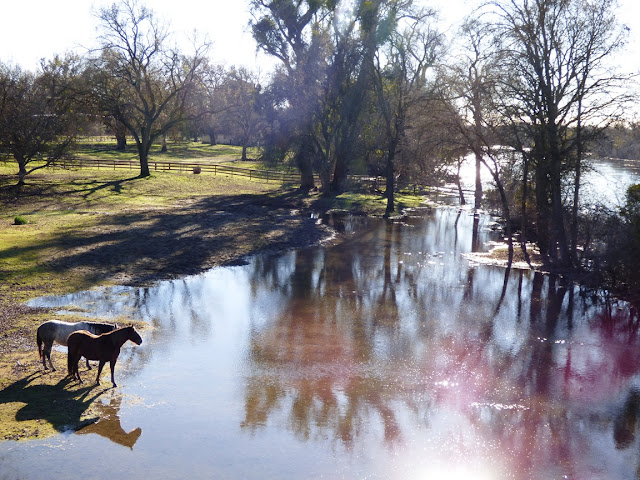 Our second stop was the Old Basso Bridge near the Gold Rush town of LaGrange. The 1912 vintage bridge is a tough one. It survived the 1997 floods, but is today only used for pedestrian traffic. A newer concrete structure crosses the river just upstream. The river had inundated an adjacent pasture. 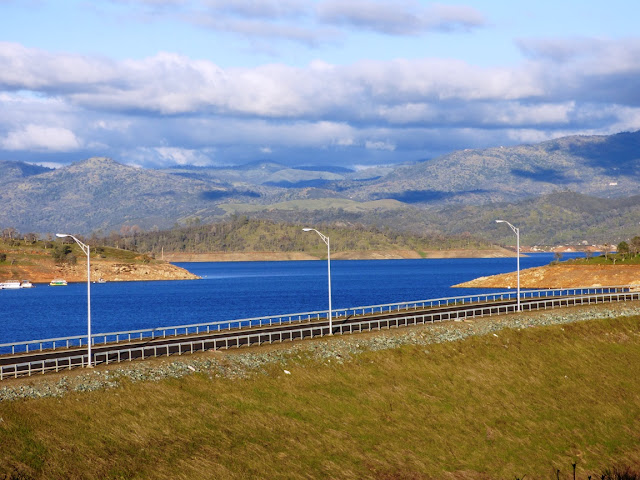 Our last stop was at Don Pedro dam itself. The crest of the dam is in the front of the picture above. One can see that the dam looks very nearly full, although that is somewhat of an illusion. The most shallow part of a reservoir pool holds the greatest volume of water, since the canyon it occupies gets wider as one moves upward.

The tone in this post has been pretty upbeat, but please, if you live in the path of the storm, take the coming flooding very seriously. It has the potential to be the biggest such event in several decades. Even if it doesn't set records, high water is always dangerous. Don't ever try to cross flooded bridges or waterways. Find out if your home is in a potential flooding zone. Keep up with local news reports and take official announcements seriously. If word comes to evacuate, do so without hesitation. If there are things you think you can't live without, then have them packed and ready to go beforehand. Today was a good practice flood. Be ready for the real thing!
Posted by Garry Hayes at 9:56 PM