Liveblogging the Deluge: Perspectives on the Biggest Flood in a Decade, Part Three

Pictures are emerging from Yosemite Valley! See the update below.
The flood on the Merced River in Yosemite Valley has crested at 12.7 feet (10,488 cubic feet per second). The highest flow was recorded at 4AM, and the waters are beginning to recede. There are more storms to come in the next few days, but they will be colder, and will start producing snow instead of rain. Although there has been some damage around the valley floor, this has to be seen as one of the best possible outcomes for Yosemite, given the power of this particular atmospheric river storm, and the level of flooding seen elsewhere in Northern California. It is still dangerous out there. 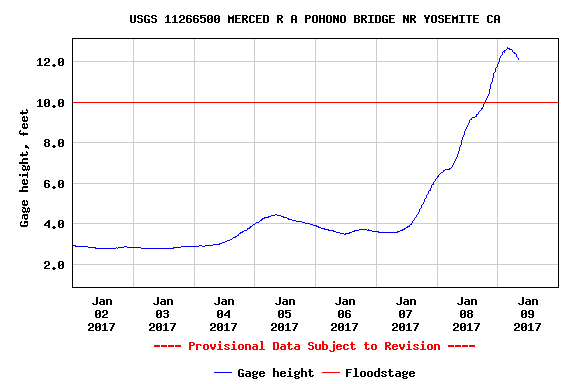 Meanwhile, on the Tuolumne River, releases have begun again from Don Pedro Reservoir, ramping up from almost nothing to 5,320 cubic feet per second. The operators are trying to modulate flows from Don Pedro with the unconstrained flows from Dry Creek to prevent flooding in the low-lying areas of Modesto downstream from the confluence of the two waterways. Flooding commences at about 9,000 cfs in that area. Inflows at Don Pedro are around 15,000 cfs right now (*see the new update below); if the dam didn't exist, the river in Modesto would be approaching 20,000 cfs. 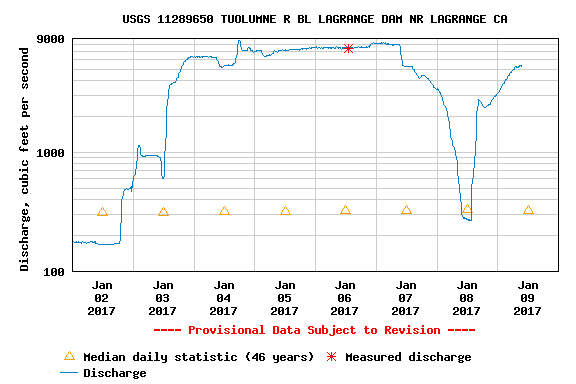 There is a lot going on with the flooding around Northern California, and Southern California is finally getting some precipitation as well. I've been concentrating on the activity on the Merced, Tuolumne, and Stanislaus River drainage basins. Updates will follow as conditions warrant.

UPDATE (1/9/17 12:50PM): Yosemite National Park has posted some photos of flood related effects in the Yosemite Valley area. Here are a few of them...

UPDATE (1/9/17 7:30PM): At about 3PM, the Merced River receded below flood stage in Yosemite Valley. It's a relief that the flood wasn't worse, especially given greater runoff to the north where there have been some really serious problems during the day. Another storm is moving in, but it's colder and will be mostly snow, which is a very good thing. 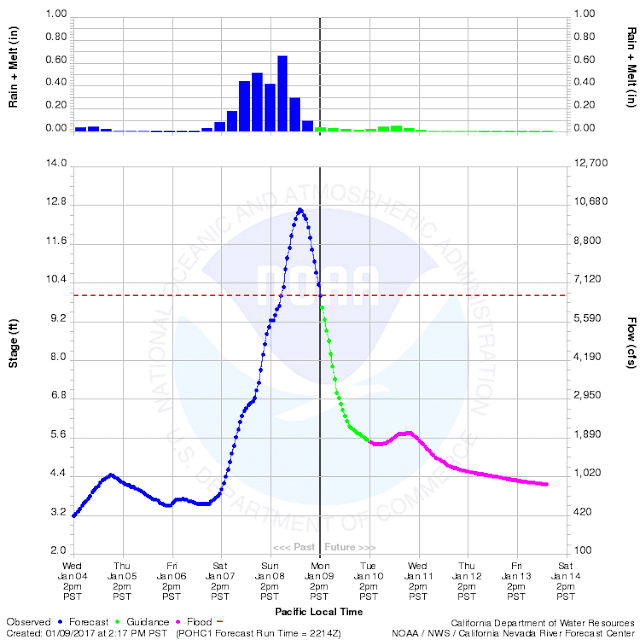 Garry, I suspect there must be a superlative for the flow over Yosemite falls. I suspect most January storms don't produce such a picturesque volume of flow on the falls. Assuming there is no flow gauge below the falls it would be qualitative. Thanks for the updates. It's a minor storm here in socal.