What happens when a small insubstantial creek that is dry for much of the year... 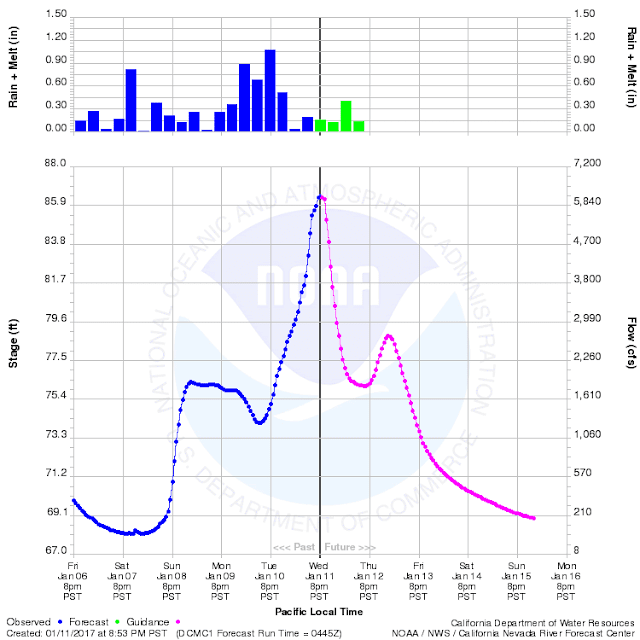 ...gets hit with a flash flood amounting to 6,100 cubic feet per second? Let's find out!

Dry Creek (one of many such "Dry Creeks" in California and elsewhere) is a "minor" tributary to the Tuolumne River that has its headwaters in the lower parts of the Mother Lode northeast of Modesto Reservoir. It actually isn't dry as much as the name might suggest because irrigation overflow keeps some water in the channel during the dry season. But it has no dams or reservoirs to control flows, so it has a history of sudden flashfloods during intense storms. I've been here in Modesto for nearly thirty years, and I've seen several events that resulted in flows of 3,000 cubic feet or so, but only once have I seen flows that approached that which took place today. It was in 1997 during some of the worst flooding ever experienced in Northern California. The opening scene in the video that I posted the other day about the 1997 floods shows Dry Creek in Waterford at that time. Compare that scene with the picture below.
There is only one stream gage on Dry Creek, and it is located downstream in Modesto at the Claus Road Bridge. The peak flow was predicted for around 5 or 6 PM, which meant the surge in Waterford upstream would be several hours earlier. I took these first pictures at the Oakdale-Waterford Highway Bridge at about 2 PM, and the river was indeed very high. Compare to the flow on December 9 in the picture above. The entire floodplain was covered by several feet of water. 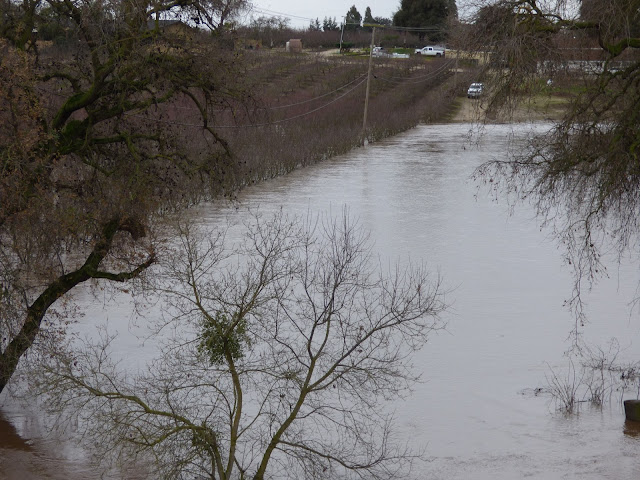 A few hours later I headed downstream to see if I could get ahead of the flood crest, and I found high water at the Church Street Bridge north of Empire. The view was astounding. In the picture above one can see how entire orchards are under water. And it wasn't standing water, either. The entire channel was flowing rapidly downstream. 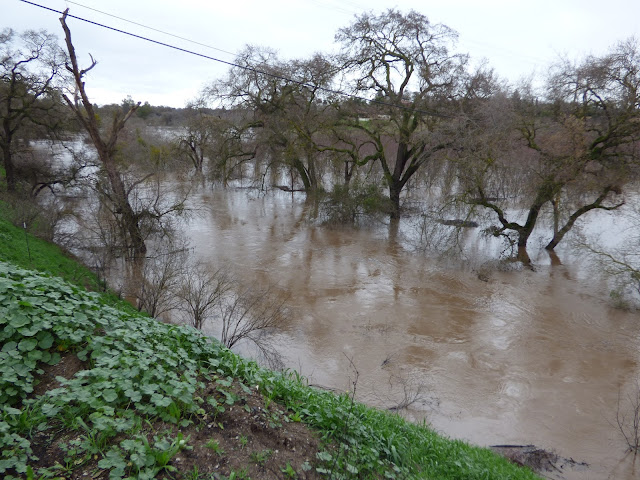 I then went just a few miles west to the Claus Road Bridge, and found that the highest flows had not yet arrived! The Dry Creek Trail had been closed because some portions were already under water, and the creek was expected to rise another couple of feet. I walked down to the river edge and found a sheriff's deputy and a crew from the office of emergency services who were using a drone to take video of the coming flood. Modesto friends: let me know if you see the videos posted anywhere! 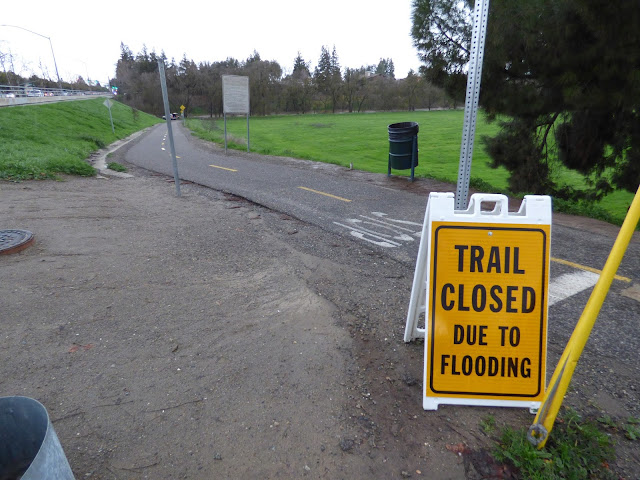 It started raining again, and it was getting darker, so I headed east again to check out some of the other bridges. 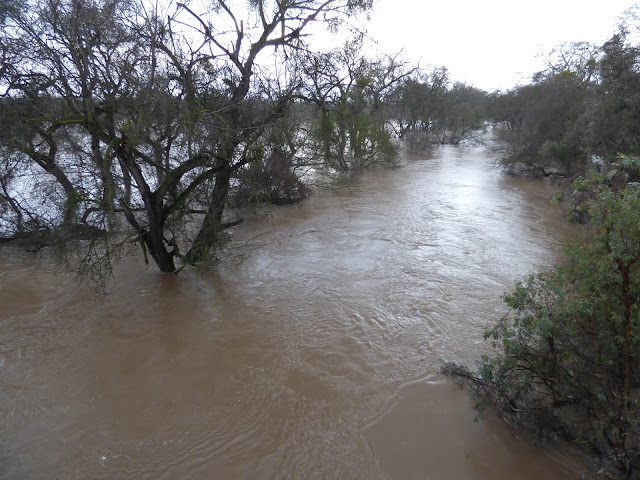 Wellsford Road bridge was the most interesting. The main channel was moving fast, and the muddy water reminded me of running the Colorado River through the Grand Canyon a few years back. Not because of any canyon walls, of course, but because of the surging muddy water with eddies and whirlpools. The flows weren't all that much different; Dry Creek was at 6,000 cfs, and most of the time the Colorado was running at about 15,000 cfs. The big difference is that the Colorado flows at that rate more or less the entire year, and Dry Creek does it once in a generation! I found a bit of information somewhere (source has been forgotten) that suggested that about once every 500 years a flood on Dry Creek could exceed 18,500 cubic feet per second. It would be something to see something like that happen, but such a flood would do incredible damage, and I wouldn't wish such a thing on anyone. 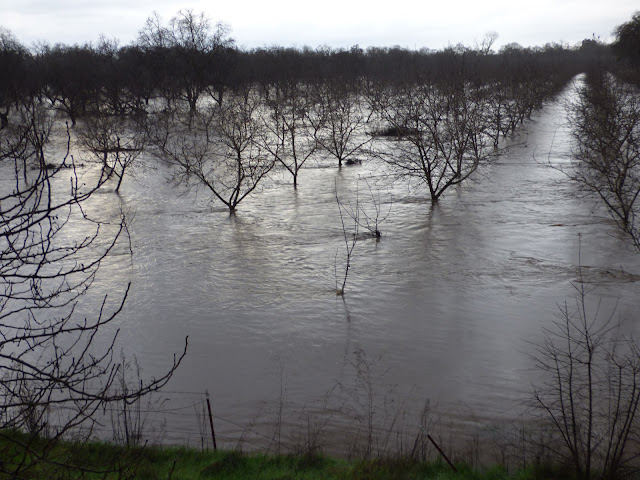 The morning will tell if there has been any serious damage downstream. The dangers of flooding are well-known today, but a number of very nice homes were built decades ago along the lower reaches of Dry Creek near the confluence with the Tuolumne. The dam operators at Don Pedro Reservior work very hard to modulate flows of the Tuolumne River to prevent the combined flows of the two rivers from exceeding 9,000 cubic feet per second. If flows go any higher, water backs up in Dry Creek, causing flooding in the neighborhoods there. 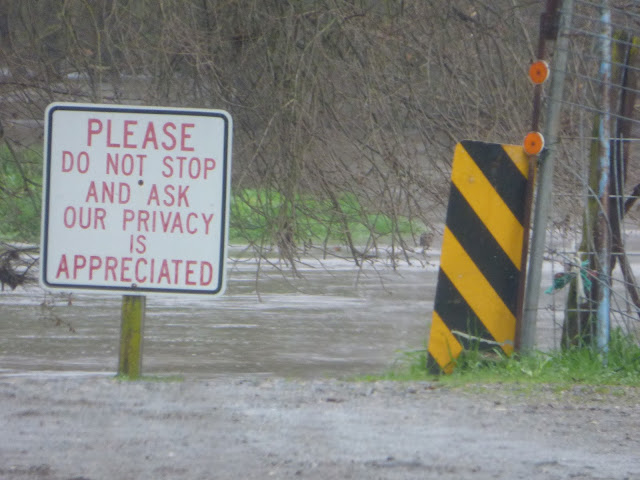 I head to work before sunrise, but I'll probably try to catch a few more photographs in the morning. It will take a day or so for flows to recede.
Posted by Garry Hayes at 11:57 PM