What a strange January it has been. We were hit by the strongest storms in two decades, and there was a spate of flooding and high river flows across much of northern and central California. The storms built up state reservoir levels to a healthy degree, and the snowpack is looking better than it has in many years. The storms were examples of atmospheric river storms, which tap into tropical moisture as they stream across the west coast of the United States, especially California. Such storms are historically the most important source of precipitation across the state. 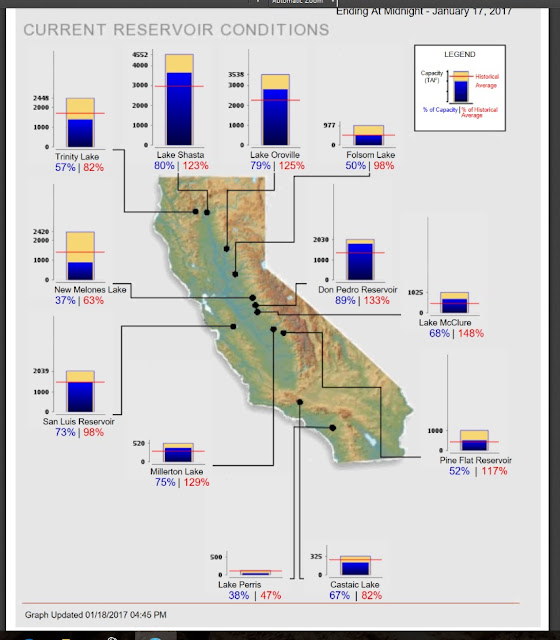 We had three pulses of precipitation during the event last week, and the first was maybe the most dangerous, as it was particularly warm and dropped heavy rain on the snowpack at elevations as high as 10,000 feet in some areas. This was a recipe for disaster, but luckily the forecasts were accurate enough that most people and communities were aware of the coming floods, and were able to act accordingly. There certainly was damage, but nowhere near the scale of the floods of 1997. The remaining storms added considerably to the snowpack so that by January 14, the statewide snowpack was 150% or more of average. Many of California's reservoirs are at 100% or more of average, with just a few exceptions, including New Melones Lake (67% of normal) and Trinity Lake (82% of normal).

All of this would be a great bit of news in terms of the drought, even if no new storms materialized. But here's the thing: it's about to happen again this week! Another set of atmospheric river storms are taking aim at California, and they will be quite egalitarian, providing a big boost to rain totals in Southern California as well (which got some rain last week, but not to the extent of the north). The first storm is here, and it is raining across the entire state from the Oregon border to Baja. 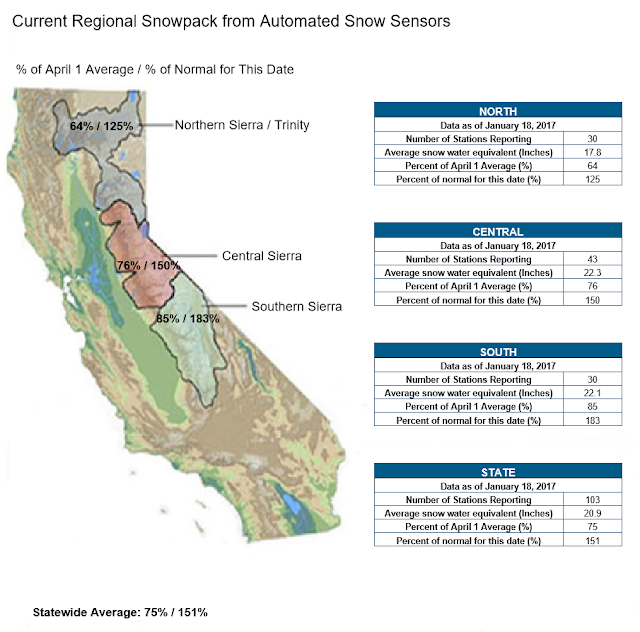 On the local scene, my backyard rain gauge captured 3.69 inches during the first set of storms, and with a smaller storm earlier in the month, I'd recorded 4.58 inches. That's more than twice the average for January around here, and 0.80 inches has already fallen tonight. 5.38 inches for January makes this the seventh wettest January in the quarter century that I've been measuring. As much as 3 more inches of precipitation is expected in this latest series of storms, so we have the chance of breaking the record for the month (8.60 inches in 2011, according to my records).

It's worth noting that in 1997, we had the record floods at the beginning of the month, and a second group of intense storms later in January. But after that, literally nothing: 0.25 inches in February, 0.09 inches in March, and 0.19 inches in April. The total precipitation for the year of worst flooding was barely higher than average at 15.43 inches (my local average for 1991-2016 is 13.92 inches).

It's going to be interesting to see what the rest of the water year holds for us...