Liveblogging the Deluge: Wrapping Things Up (for now) 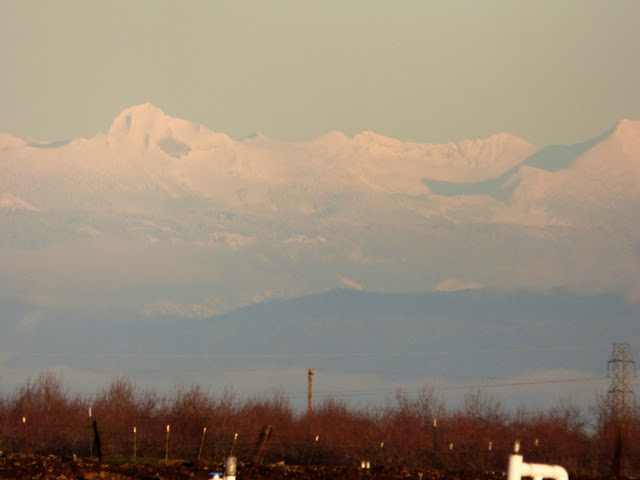 A week ago, I looked eastward from my science lab and saw the sun setting on the Sierra Nevada crest from 80 or 90 miles away. It was quite literally moments before the first outliers of the storm arrived and hid the mountains from view. Over the next six days or so, California was pummeled by the worst storm in two decades. Flooding was widespread, and there were some huge changes in my local bailiwick, the drainages of the Merced, Tuolumne, and Stanislaus rivers. I've been able to directly document some out-of-control drainages like Dry Creek, and some barely controlled drainages like the Tuolumne River (short story, flood with Don Pedro dam, 9,000 cubic feet per second; flood without the dam, 45,000 cubic feet per second). I couldn't get up there, but I followed events in Yosemite Valley as the park service prepared for the biggest flood in a long time. One of the most incredible moments of the week was the opportunity that I had to inspect the activity at La Grange Reservoir, where the Tuolumne River was plunging over the dam ramparts at 7,000 cubic feet per second. I also took some video (below) that I wasn't able to post yesterday.

I was out running errands yesterday evening, and as if to bookend the events of the week, the sun once again was shining on the newly fallen snow of the Sierra Nevada crest, this time from Claribel Road between Oakdale and Waterford (the first picture of this post). The storm, the worst in 20 years, was over, and northern and central California began cleaning up the flood damage.

There was an even bigger issue: the California drought. Since 2011, we have been in the grip of the worst drought ever recorded in modern times (megadroughts lasting a century or so are known from the recent geologic past). Three diagrams illustrate the massive changes that have taken place since last year, and since last week.
The first diagram (above) shows reservoir storage around the state one year ago. At that time, not a single major reservoir in the state had anything close to normal storage. Most were between 20-36% of capacity, which was barely half of normal in the best of cases. Some were below 15%, including New Melones, at 14%, and McClure at 9%. The picture improved slightly later in the rainy season, but extreme drought conditions still prevailed over 90% of the state.
We had a good start to the rainy season, with a powerful storm arriving in October starting things off early. By the beginning of January, most reservoirs around the state were showing marked improvement. Four of them, McClure, Don Pedro, Shasta, and Millerton, were actually above normal for this time of year. Others were doing "okay", not quite to normal, but better than a year ago by a wide margin.
By the end of the storm, all the reservoirs were doing very well, with the sole exceptions of Perris and Castaic, both in Southern California, where considerably less rain fell. All the other reservoirs showed large rises in storage. Lake McClure on the Merced River jumped from 46% to 66% of capacity (145% of normal). Don Pedro increased from 76% to 90% of capacity (134% of normal). Although New Melones Lake lags behind other major reservoirs in the state, it still saw a rise from 27% to 35% of capacity (61% of normal).
Even better news comes from the snowpack, which increased considerably after the warm start of the storm. Prior to the storm, no part of the Sierra Nevada had a normal amount of snow. In the aftermath of the storm, the snowpack ranges from 132% to 197% of normal for this time of year. If not another flake of snow fell this year, we would be at 74% of a full year (not counting melting and evaporation over the next few months)! And we have three more months of rainy season to come, including another atmospheric river storm arriving in the state on Tuesday (it's not thought to be as powerful, but will be falling on fully saturated ground).

Single storms can make a difference, but even the biggest are not drought-enders. We really need two or more consecutive wet years to start making some inroads in our depleted groundwater basins. But the storm happened and it dumped a lot of rain in California. The drought may not yet be ended, but it looks better right now than it did a year ago.
Posted by Garry Hayes at 11:48 PM

I post as anonymous but appreciate your blog very much. It's great news to dial the drought meter back a bunch. I've from SoCal but have visited a friend who moved into the hills near Porterville so I appreciate your championing of the area and providing us with insight to what we all take for granted (water when the tap is turned on). Keep posting, Garry.