The Hawai'i That Was: Watching the Destruction of the Islands in Real Time


Geologists have at their fingertips the closest thing to a working time machine that exists on planet Earth. We can't travel to the past, of course, but we can decipher past happenings by working out the sequence of geological events. But with the Hawaiian Islands, we have a different kind of time machine. We can predict the future of the Big Island.

The Hawaiian Islands are an example of an active hot spot, an enigmatic place in the Earth's mantle that is much hotter than surrounding regions. The hot spots produce tremendous amounts of basaltic lava that erupt onto the ocean floor, and the constant eruptions result in the formation of the gigantic shields like Mauna Loa and Mauna Kea (top picture). Since the asthenosphere (solid upper mantle and crust) is in constant lateral motion, the volcanoes that grow on the hot spots are carried off, and ultimately become inactive. The former hot spot volcanoes don't end with Kauai and Ni'ihau. There are submerged former islands on the Pacific Ocean floor that extend all the way to the Aleutian Islands in Alaska. In the history of these islands and former islands we see the future of the Big Island of Hawai'i. It will be a history of destruction and loss.
The Big Island is larger than all of the other main Hawaiian Islands combined. As has been mentioned in the previous posts on the the Hawai'i That Was, the island is composed of five distinct shield volcanoes, Kilauea, Mauna Loa, Mauna Kea, Hualalai, and Kohala. As one flies to Kaua'i, as we did during our recent trip, we passed each of these smaller islands, some well known, others not. They include popular Maui and Molokai, as well as Lana'i and Kaho'olawe.

Maui (above) includes two shield volcanoes, the immense Haleakala (10,023 ft - 3,055 m), and the lesser known West Maui volcano (5,788 ft - 1,764 m). A low valley separates the two volcanoes. Some might ask why there are only two volcanoes and not five, like on the Big Island. Why, indeed?
Moloka'i is likewise made up of two volcanoes, although the linear nature of the island hardly suggests any kind of volcano shape at all. The entire north side of the island is one continuous high cliff that originated when the half of the volcano slid into the sea in a gigantic debris avalanche. Another island composed of two volcanoes. Why is that?
The island of Lana'i is what remains of a single volcano. The uninhabited island of Kaho'olawe is likewise the remains of an isolated shield. So what's with all of these small islands composed of one or two volcanoes, instead of a large single island like the Big Island of Hawai'i? An answer is to be found with a map of the islands that also shows the submarine geology
The four islands, Maui, Moloka'i, Lana'i, and Kaho'olawe, are spaced about as far apart from each other as the peaks on the Big Island. The intervening seas are very shallow, and one soon realizes that Mau'i and the other islands were in fact once a single island similar in size to the Big Island. The islands have been sinking slowly as they press down on the underlying crust and mantle. They were interconnected as recently as the last ice age. 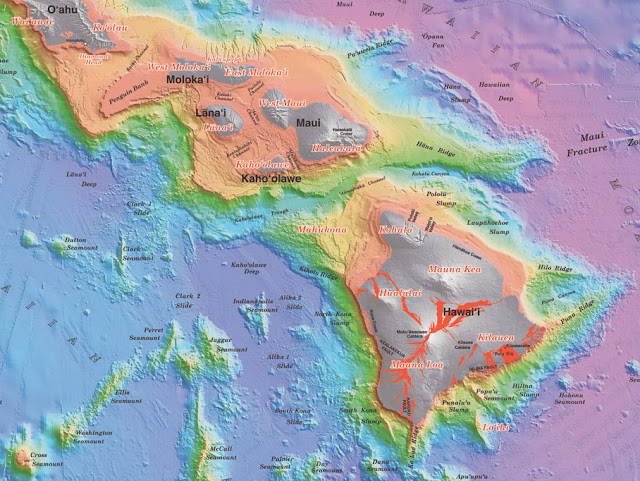 So, on our flight from the Big Island to Kaua'i, we see the future of the Big Island of Hawai'i. As the volcanoes subside (measurements at Hilo suggest about an inch per decade), the single island will become a series of isolated islands. Erosion will tear away at their flanks, and gigantic avalanches will tear away large portions, spreading the debris across the deep ocean floor. What's nice about this? The degraded and eroded masses of rock in the islands of Hawai'i have turned out to be some of the most beautiful landscapes on the planet! In the next post, we'll arrive at the most eroded island of all, Kaua'i (our recent trip only covered the two islands; I may take up an exploration of Oahu and Maui later on).

Garry,
Interesting post. Looking at Google maps I suspect I see lots of similar motion of the athenosphere near Hawaii leaving trails of islands to the northwest. Am I interpreting this correctly as the same phenomenon as Hawaii? And what causes a hot spot to stay so hot for so long when there is motion all around it?