The Hawai'i That Was: Pu'uhonua o Honaunau, the Place of Sanctuary That Might Not Be So Safe (Geologically)

I mentioned earlier in this series that cliffs aren't that common on the Big Island, with the exception of the Pololu and Waipi'o coastline. There is another cliff, though, and its formation has had a profound influence on the island's history, even though it took place long before humans arrived.

Large cliffs develop on the Big Island of Hawai'i primarily as a result of gigantic debris avalanches that carry a large portion of the island into the deep ocean, leaving behind cliffs and a scalloped coastline. The Alika debris avalanche did this exact thing about 120,000 years ago, with a runout of about 60 miles across the ocean floor. The slide produced a huge tsunami that dumped chunks of coral more than 1,000 feet above sea level on Lana'i (most tsunamis generated by earthquakes rarely exceed 100 feet in height). If such an event were to happen today, the effects would be unthinkably horrific. Luckily, they are rare, tens of thousands of years apart. There would presumably be many signs of an impending collapse (one would hope, anyway).
In terms of human interest, the slide produced a deepwater bay, Kealakekua, that was of great value to the native Hawaiians who colonized this coast. For several miles south, the coast was unusually flat, as subsequent lava flows filled out and formed sort of a delta into the Pacific. The amount of level land led to a high population density. Important archaeological sites are extensive, most notably at Kealakekua Bay State Historical Park, and at Pu'uhonua o Honaunau National Historical Park.

The park at Kealakekua Bay preserves Hikiau Heiau (above), a huge structure dedicated to the war god Ku, and Lono, the god associated with fertility of the land. It has been damaged by a number of tsunamis, but has been repaired and is still sometimes utilized for ceremonies.

The cliff at Kealakekua Bay is of special importance to native Hawaiians. It's called Pali Kapu O Keoua ("the forbidden cliff of Keoua"), and the various holes and caves in the cliff contain the bones of royalty. Such bones are said to possess great power (mana), and so great effort was invested in keeping their location hidden (I seem to remember reading that a trusted servant would dangle from a rope on such cliffs, and when he had hidden the bones, the rope would be cut and the servant would plunge to his death; an honor, I guess, but not a great job benefit). 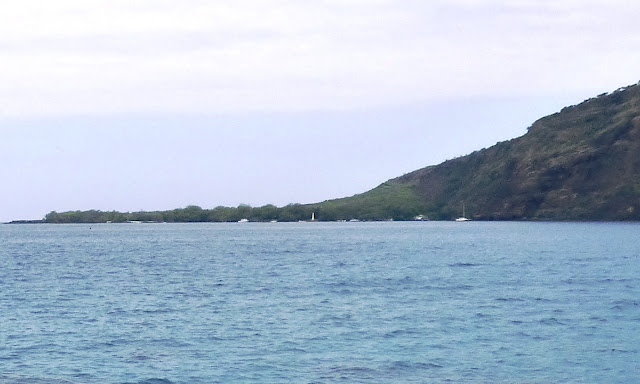 One more moment of history has to be mentioned when exploring Kealakekua Bay. The small white tower in the middle of the picture above marks a small bit of property owned by the British government. It's called the Cook Monument, and it commemorates the "discovery" of the Hawaiian Islands for the first time by someone other than Polynesians. Captain James Cook and his crew landed here in 1779, and through a set of odd circumstances were greeted as gods. They spent a month interacting with the islanders, and left on good terms. A broken mast necessitated their return a short time later and things didn't go so well. Captain Cook was killed in a fracas over a rowboat. The Hawaiians treated his body as a royal, and his remains were hidden on the pali (although some "bits" were returned to the crew).

The effect of European contact cannot be overstated. While the arrival of western technology allowed King Kamehameha I to gain control of the entire island chain, forming the nation of Hawai'i, disease decimated the Hawaiian people (from as many as 1,000,000 to maybe 30,000). Just over a century later the island was taken over by corporate interests, before becoming a territory of the United States. Although the Polynesians had caused the extinction of native species through the introduction of invasive animals and plants, the process was greatly accelerated with the arrival of the Europeans.
Life on Hawai'i was difficult enough, with the danger of volcanic eruptions, earthquakes and tsunamis, but in the years before European contact, seemingly small slights could get you executed. The high population of the islands required a highly regimented society to maintain order, and the principle of kapu included a long list of transgressions that could result in an instant death penalty. These rules involved how commoners could interact with royalty (stepping on ali'i's shadow, or touching him or his possessions), how they interacted with each other (men could not eat with women), and relationships with the land (fishing and logging regulations). If you broke kapu, even by accident, the death penalty could be immediate. In essence, a person had one chance to survive. There were sanctuaries, the Pu'uhonua, where one could be cleansed of their sin and receive forgiveness. The kapu breakers simply need to get there before their pursuers caught them. Pu'uhonua o Honaunau National Historical Park in part preserves one of these sanctuaries.

It's hard to understand how kapu was tolerated, but in the context of religion, breaking of kapu could result in the punishment of the entire community, which was meted out in the form of storms, floods, earthquakes, tsunamis, and volcanic eruptions. It's a powerful impetus to stay in line if one thought they could bring destruction on their entire society. The strict adherence to kapu ended with the death of King Kamehameha I in 1819. His son the new king abolished the system by dining with his mother.
The park in general is one of the best places on the islands to learn about Hawaiian culture. There are examples of heiaus, hales (houses), temples, and the pu'uhonua itself. There are some brackish pools that served as fishponds for the royalty. 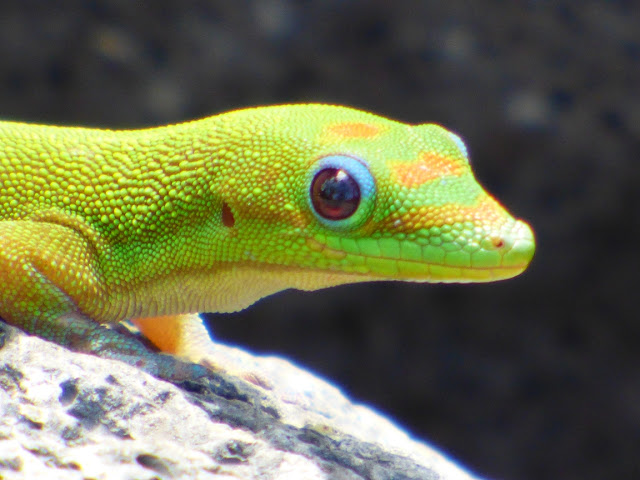 There are interesting critters about as well. Some species of gecko may have arrived with the Polynesians, but others arrived much later. Eight species are present on the islands now. They are usually considered good luck, since they have an appetite for cockroaches and other pests. 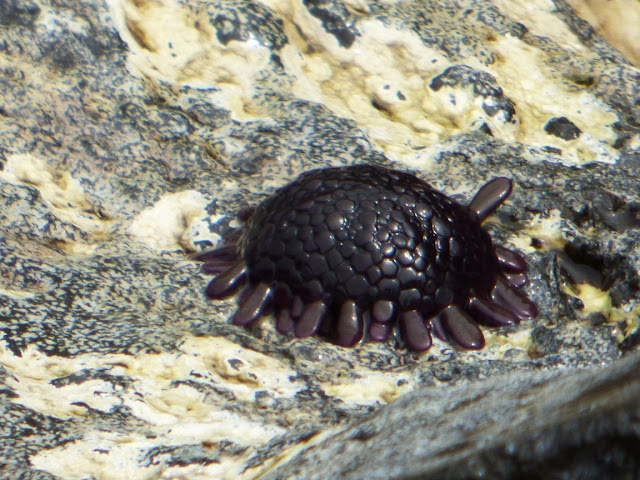 The creature above is actually a sea urchin, the Shingled Sea Urchin. The modified flattened spines give the animal extreme stability in wave zones.

Pu'uhonua o Honaunau and Kealakekua Bay exude a sense of peace today, but they mask a turbulent past, both geological, and anthropological. If you are ever on the Big Island, they are two very interesting stops.
Posted by Garry Hayes at 12:50 AM