The Importance of Green Zones in Urban Settings (and a Fox) 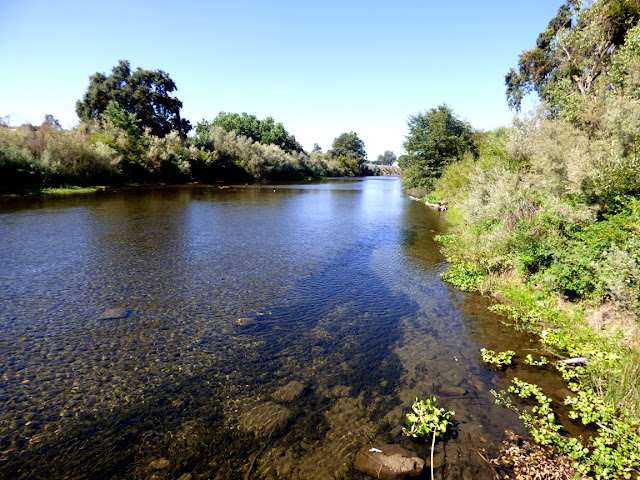 I've occasionally noted the presence of a river trail in our community at the boundary of the Sierra Nevada Mother Lode and the Great Valley. It follows a stretch of the Tuolumne River for two miles, allowing access to the river for fishing, hiking, riding, floating, and wildlife watching. It was constructed in the past year, and it has been a wonderful addition to our community. I've spent much of the last two years documenting the bird species seen along the trail (search "Tuolumne River" on my other blog Geotripper's California Birds for examples). I've found 55 species so far, but there are many more to be found. 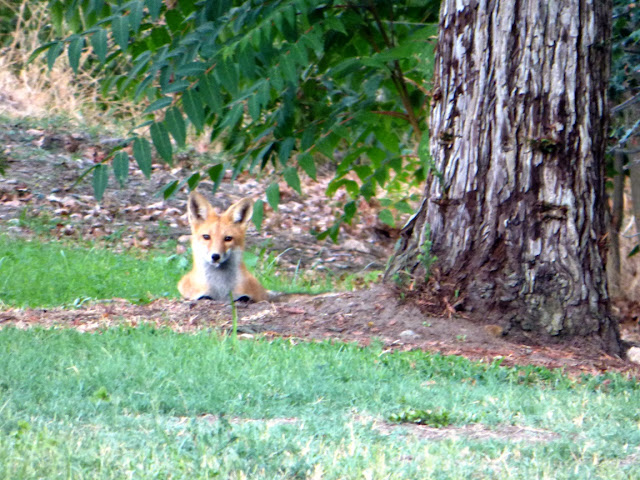 There are many reasons that a trail like this is a valuable addition to a community, but one of the most important in this instance is that there are three schools within easy walking distance of the river. The kids of our community are starved for good science education, and the adjacent river is an incredible resource. There are already programs being conducted through the auspices of organizations like the Tuolumne River Trust. 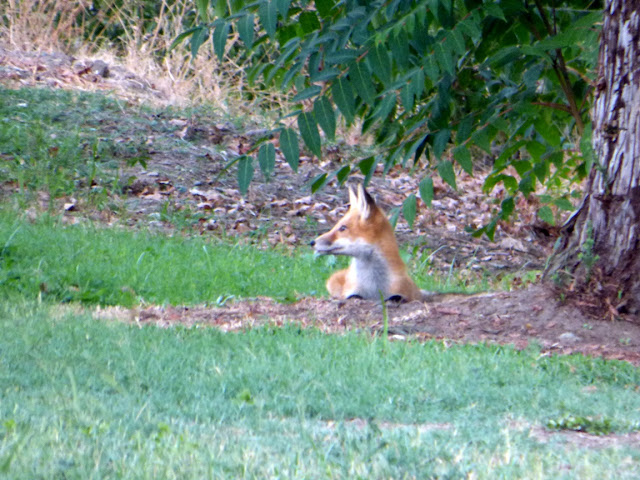 I was out walking this evening at sunset, something I've been doing almost every day this summer (when I've been home, anyway). I've seen the birds, ground squirrels, river otters, and once in a great while I will see one of the foxes that live by the river. There are two kinds, the Gray Fox, and the Red Fox. Tonight's sighting was a Red Fox. There is a small patch of grass under some Redwood trees at the water treatment plant at the midpoint of the trail, and in the distance I could see a stump that I didn't remember seeing before. The camera zoom revealed the "stump" to be a fox lounging in the grass. We watched each other for a few moments, and the fox wandered into the brush.

Only the Gray Fox is native to the area. There is a Red Fox species, the Sierra Nevada Red Fox, but it is exceedingly rare and extremely unlikely to be found at low elevations. The Red Foxes of the Great Valley were escapees from fur farms and animals brought from back east for hunting purposes. They have been causing problems in some areas as they are hunting endangered species who have no natural defenses to their hunting tactics. To the best of my knowledge they are not having that kind of impact in this area. But darn if they aren't cute... 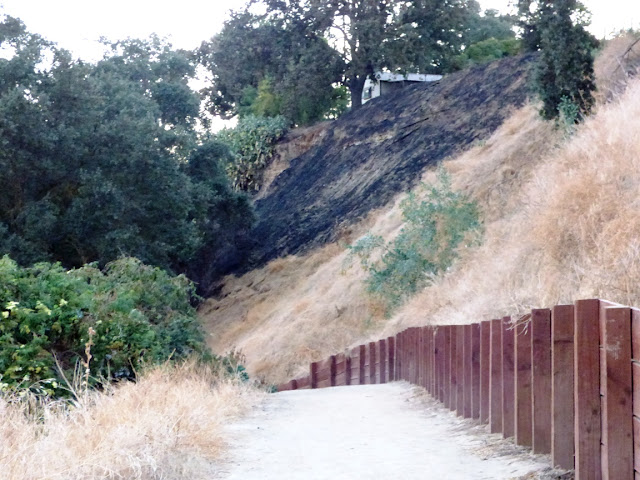 There was another upsetting development. Sometime between yesterday morning and this evening, a fire burned along a section of the trail, scorching perhaps an acre or so of grass. It burned way too close to some mature oak trees, but thankfully they don't seem to be damaged. I can't tell if the fire started at the base and moved up the hill, or the opposite, but it's disturbing that it happened. I don't like thinking that an arsonist is among us. The trees along the river are a precious gift.
Posted by Garry Hayes at 9:51 PM