Notes from the Monsoon in Grand Canyon National Park

Timing is everything. If one schedules a trip to the American Southwest in July or August, one may very well have to contend with the monsoons, the change in prevailing winds that brings warm humid air out of the Gulf of Mexico. The hot weather produces convection cells and intense thunderstorm activity, and flash flooding is a deadly possibility. Such flooding was in the news today in Utah and Arizona (here and here).
I got incredibly lucky in my travels this last week. We spent three nights on the North Rim of Grand Canyon (two of them in tents), and we got two evenings of dramatic clouds with all kinds of lightning and thunder in the distance. A bit of rain fell (with some serious thunder), but not enough to soak our gear. We had a delightful pair of evenings watching the light show from the viewing deck of the Bright Angel Lodge.
The third evening seemed calmer, and we saw only a few lightning bolts in the far distance. We headed into the lodge for dinner after the sun set and were enjoying our food, but we became aware that things were changing dramatically outside. The lightning strikes were happening only seconds apart, and the thunder was deafening. Rain was filling the canyon below. Like idiots we went outside in the raging storm to watch! I live in an area that gets maybe one or two thunderstorms a year, so I'm easily impressed. But there is another aspect: rainbows, sunsets, and lightning strikes are beautiful in their own right, but placed against the backdrop of one of America's greatest national parks they become truly awesome.

Though lightning was striking only a few hundred yards away, no one was hurt so far as I know. The rain fell for most of the night on Monday, and in the morning the ground was thoroughly soaked and everything felt fresh. The storms gained in intensity the following day, and there are now reports of flooding in places where I was eating lunch in the hot sun just a day ago.

One can never underestimate the power of flash flooding. It has proven deadly many times over through the years. No matter how strong you are, you simply cannot swim out of a rapidly swirling mix of mud, boulders, and water. If you are ever in the southwest exploring slot canyons, be aware of the weather. They became slot canyons precisely because of flash flooding. Even just driving your evening commute in Phoenix or Las Vegas can be dangerous. Take the warnings seriously. 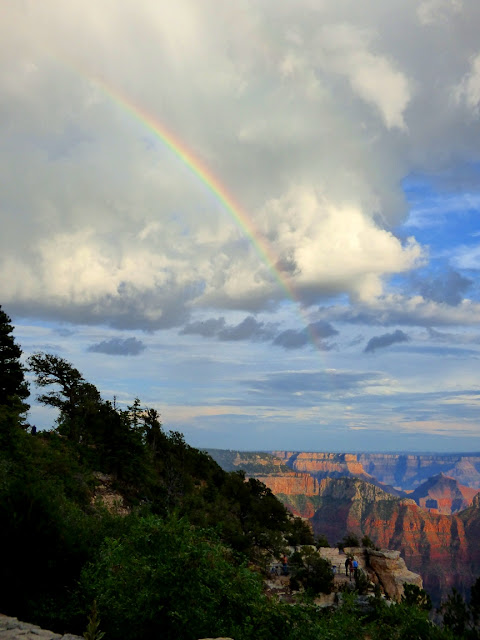 The monsoons are dangerous, but they also bring needed rain to an area ravaged by drought for most of the last two decades. And they bring great beauty. I hope you enjoy this selection of photographs from my trip to the Grand Canyuon.
Posted by Garry Hayes at 12:45 AM

You got some absolutely amazing shots! Sorry I missed all the excitement. Even when I left Kanab I beat the flooding. Looks like more coming. Really good to see you and the family.

It was nice talking with you and enjoying the storms that evening!

These are some of your best photographs. Thanks for sharing them.