The Hawai'i That Had Never Been: A Mountain That is Younger Than Me, Mauna Ulu

So much of geology is incremental. A rock slides from a cliff top, a river carries sand grains downstream, a glacier slowly pushes debris down a mountain canyon. Each of these minor events add up to major changes to a landscape over millions of years: mountains disappear, lakes and seas fill with sediment, canyon gorges are carved. But to a human observer, the changes are invisible. We simply don't live long enough to see the changes that take place in geologic time.

Hawai'i, especially the Big Island, is different. The entire island is less than a million years old, not even 1/4,000th the age of the planet. Because the island sits atop a hot spot, volcanism is a near constant activity, and volcanism leads to major and rapid changes to the landscape. In this current blog series, we've been talking about the "Hawai'i That Was", the environment that existed prior to the arrival of the Europeans, and before the arrival of the Polynesians. But when we look at volcanic activity at Kilauea on the Big Island, we are looking at landscapes that have never existed before. They are new lands. 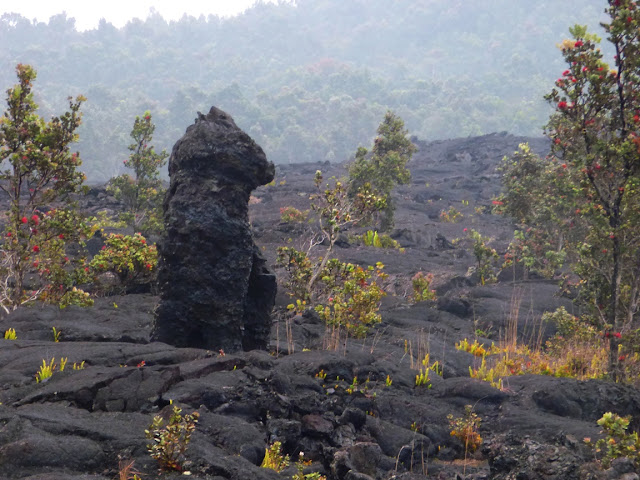 That's not to say that much is destroyed in the making of new landscapes. The basaltic lava that emanates from the vents along the flank of Kilauea's east rift does a lot of destruction as it flows towards the sea. Take a look at the mound of lava in the picture above. It's a lava tree, formed when lava flowed past a living tree, and congealed around the burning trunk. The level of the lava dropped, but not the solid material around the former tree. The original Hawaiian thought these to be the lithified bodies of humans (although the one above looks much more like a cat). 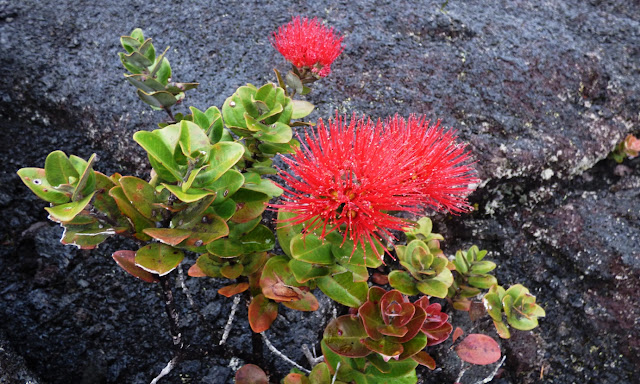 My last post on the subject was a discussion of how kipukas preserve a bit of the world that was, prior to the eruption. I said that we visited two of them, but I later remembered that we explored two others as well. It was a trail near Chain of Craters Road that took in two volcanoes, Pu'u Huluhulu, and Mauna Ulu (this is a different Pu'u Huluhulu than the one on Saddle Road). 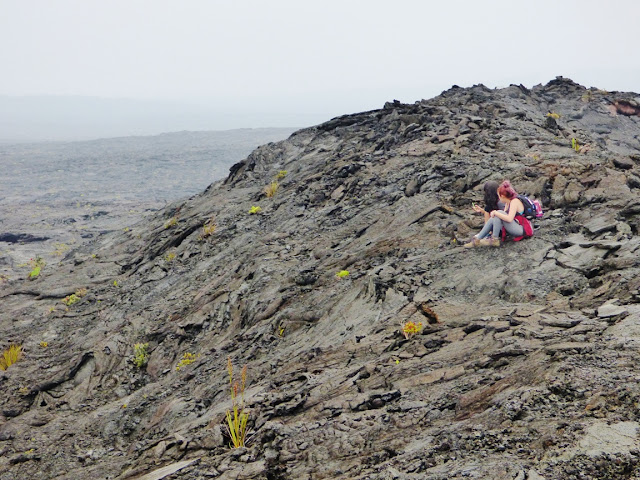 About 500 years ago, a mildly explosive basalt eruption produced a cinder cone now called Pu'u Huluhulu ("shaggy hill"). Over time, intense weathering of the basalt cinders produced a rich soil that allowed the growth of a rainforest. The forest covered the surrounding landscape too, but that changed not long ago. In 1969 eruptions began along the rift zone that produced lava flows for five years, the longest sustained eruption ever recorded (this record as since been broken by the current Pu'u O'o eruption that started in 1983 and is continuing today). 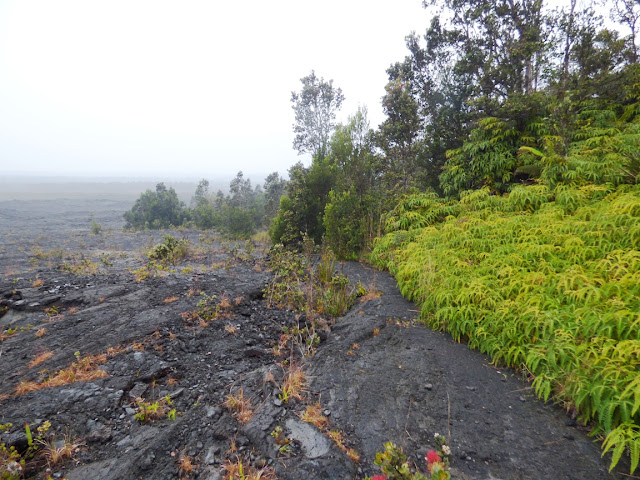 The lava flows filled around half of the craters along Chain of Craters Road, and covered the road too. The flows piled up against Pu'u Huluhulu as well, but weren't thick enough to overwhelm the hill and the rainforest that covered it. The forest survived as a kipuka. The trail climbs to the summit of Pu'u Huluhulu, and provides what is said to be a spectacular view of Mauna Loa, Kilauea, and Mauna Kea. I'd love to show pictures of the view, but one doesn't get to control the weather when traveling to the islands. We spent much of the hike in a rainstorm with a low cloud deck. 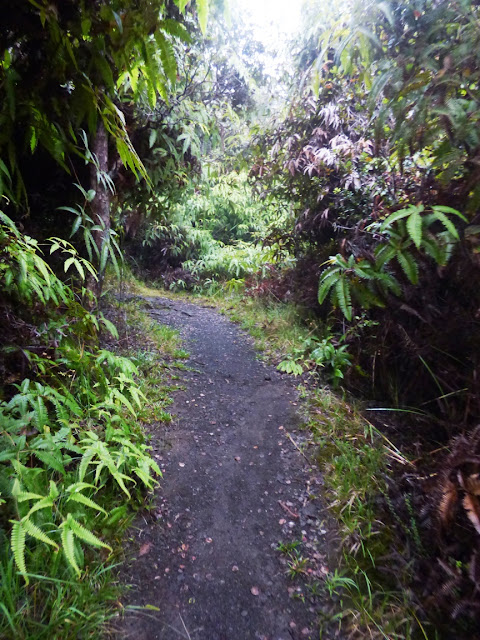 But there was something that we could see: a new mountain. Mauna Ulu is a 400 foot high shield volcano that came into existence while I was starting high school. It's hard to comprehend the pace of geologic change when it is incremental and slow, but it is also sometimes hard to believe how fast things can happen too. There are at least four mountains in the United States that didn't exist when I was born in 1957: Pu'u Pua'i in Kilauea Iki, Pu'u O'o, Mauna Ulu (below), and...the dome in the crater of Mt. St. Helens in Washington state! Rapid geologic change is not confined to the Big Island of Hawai'i... 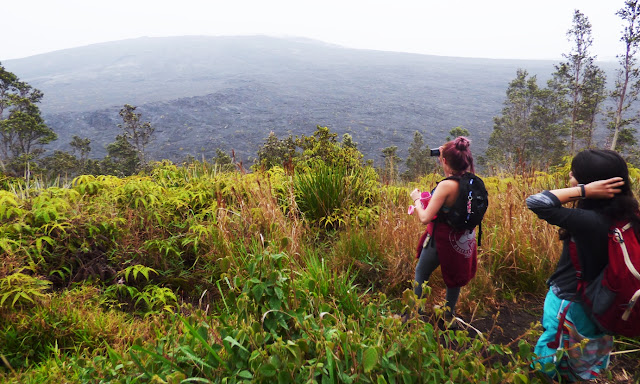 The hike to the top of Pu'u Huluhulu is mostly level, with a steep climb at the end of a 1.25 mile trail from just off Chain of Craters Road in Hawai'i Volcanoes National Park. Don't miss it if you are ever in the park, and do it on a sunny day. I'd like to see the view!
Posted by Garry Hayes at 12:20 AM