The Hawai'i That Was: There was a Monster in the Water at Laupahoehoe 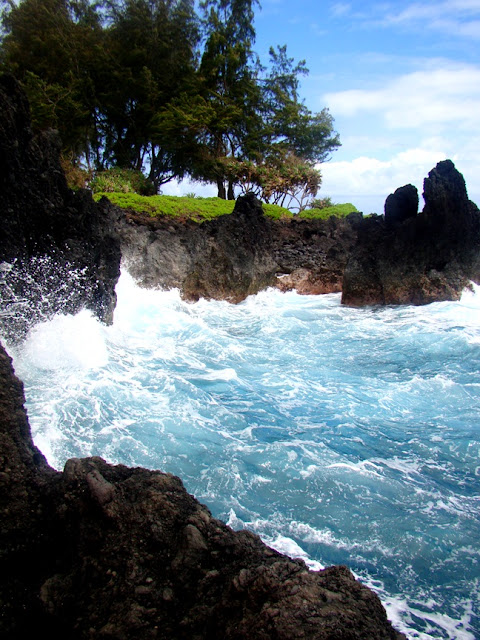 There is a small bay a few miles northwest of Hilo on the Big Island of Hawai'i called Laupahoehoe. It's a raw section of the coastline, with waves that crash violently against the ragged exposures of basalt. I stand at the point and imagine the movies I've seen where monsters rise out of the waves. Godzilla would be at home here, and King Kong might wander down from the highlands to look out to sea. There is a monster here, though, and it is very real. It is a killer of the unwary. 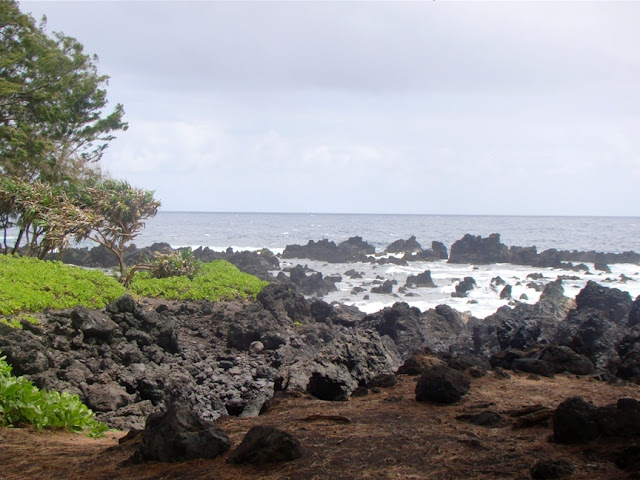 Despite the ruggedness of the coastline, residents built a breakwater and boat launch many years ago, and fishing boats plied the waters offshore. A small town was built on the coastal flat, including a  schoolhouse. Accounts describe a pleasant community.

On April 1, 1946, a magnitude 8.6 earthquake struck in the Aleutian Islands of Alaska. The tremor suddenly moved the sea floor, displacing an immeasurable volume of seawater and setting in motion a powerful tsunami. The wave was as high as one hundred feet along the Alaska shoreline, but few people lived there. It was the energy directed into the Pacific Ocean that became the monster that consumed Laupahoehoe. The waves traveled across the ocean at the speed of a jetliner, reaching the Hawaiian Islands just 5 hours later. The waves would have not been noticed in the open ocean because the wave crests were far apart. It wasn't until they reached the shallow sea floor that the full fury of the wave energy would be demonstrated.
In most places, the first hint that something was amiss was the withdrawal of the water offshore, as stunned townspeople watched. Fish and eels were left flopping on the exposed rocks. Few people knew what it meant and wandered onto the coastal flat, but a several did understand their peril. They started running or driving up the hill, trying to warn others. The first wave to arrive was not catastrophic, being only a few feet high, but the next wave reached a depth of 35 feet (I say "depth" because the wave arrived more as a surge of water rather than a vertical wall). The wave that hit Hilo down the coast killed more than a hundred people, but what happened at Laupahoehoe felt more tragic, if that is possible.
The children of the town were at school on the coastal flat. The wave swept away the school house, killing 20 students and four teachers. Only a few children and one teacher survived. Some survivors floated at sea for more than a day before being rescued. How horrible it is to lose most of the kids in a community...I truly cannot imagine. 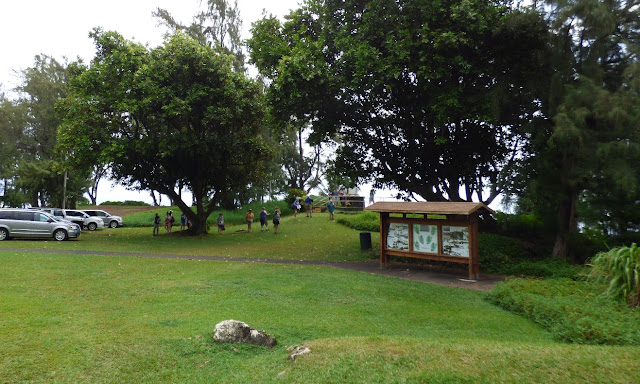 In the sad aftermath, the town was moved from the coastal flat to the hills above, and the site was made into a beautiful coastal park that almost belies the horrible tragedy that took place here. But the people of the town won't let their lost ones be forgotten. On the small hill above the bay there is a monument to those who were lost and after 70 years there are still flowers and leis being placed in their memory. 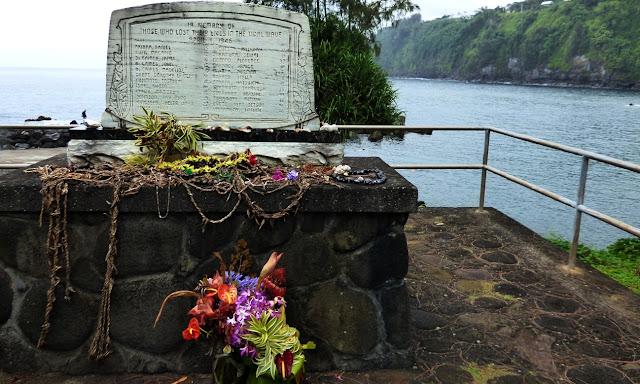 There was one positive change that occurred as a result of this horrible tragedy. It was the lack of warning that led to the deaths of so many, and after 1946 the Pacific Tsunami Warning Center was established, providing hours of warning to towns, states, and countries in the path of Pacific Ocean tsunamis. Tens of thousands of lives have no doubt been saved in the decades since. In the Japan earthquake of 2011 the waves that reached Hawai'i could have led to fatalities, but didn't because Hawaiians know what to do when the warnings come.

One can only wish that we had had the foresight to set up a similar system in the Indian Ocean prior to 2004. The magnitude 9.2 Indian Ocean earthquake produced a tsunami that killed 230,000 people.
Posted by Garry Hayes at 1:09 PM