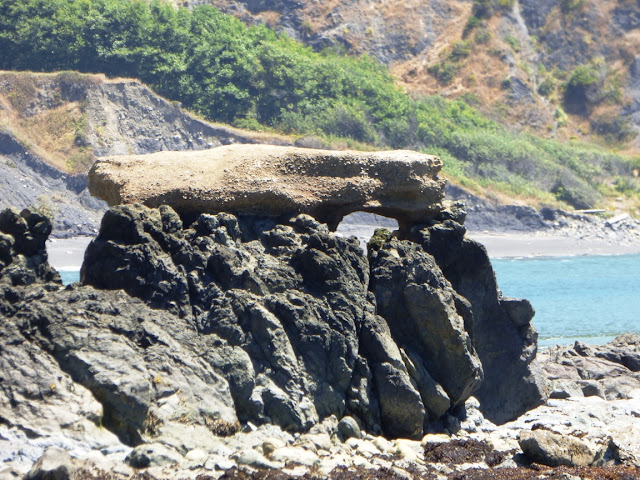 Will someone save the unconformity? It's going to gone soon!

Well, okay, there's not much to be done about it, being that the exposure seen here is on the shoreline of one of the most violent storm-ridden coasts in California, and just a half mile or so from the northernmost land exposure of the San Andreas fault. It's at Shelter Cove on California's Lost Coast, one of the longest undeveloped stretches of coastline in the nation. Except for the small town of Shelter Cove, there is wilderness for a distance of about fifty miles, from Fort Bragg to Ferndale.

The underlying rock is part of the Franciscan Complex, a mixture of graywacke sandstone and shale that was deposited in the trench that once existed off the coast of California in Mesozoic and early Cenozoic time. The gray rocks were uplifted and eroded, and after a stretch of time, were covered by the tan-colored breccia or conglomerate. It was part of the wave-cut cliffs, but was isolated by a fluke of erosion. It's in the active wave zone, so it won't be long before it disappears. The wave-cut bench on which it sits may become a future unconformity if it is ever covered by sediment.
Posted by Garry Hayes at 4:05 PM