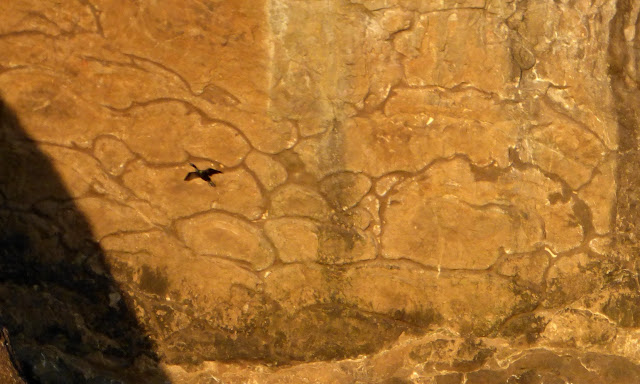 I'm still on the road so posts are few, but I occasionally get to a computer. Today's picture is a Cormorant flying in front of a wave-cut cliff exposing pillow basalt at Waikiki Beach. I've been writing a lot about Hawai'i of late, so you are forgiven for thinking that this is one the islands, but it's not. It's at Cape Disappointment on the Columbia River in Washington state. It got the name from an event in 1811 when a shipwreck led to the death of a Hawaiian crewmember whose body washed up on the beach here (I don't know why they didn't just use his name).

The pillow basalt is part of the Crescent Formation, a unit that preserves sea-floor sediments and basalt of the ocean crust that was swept into the subduction zone along the west coast of North America. Pillows are globular masses of basalt that form when the lava flows into water. The lava dates from the middle Eocene epoch, about 40 million years ago.

Cape Disappointment is steeped in history, being the last point of solid bedrock along the Columbia River where it flows into the Pacific Ocean. The name came from the failure of early explorers to recognize this spot as the mouth of the Columbia River (hazardous and constantly shifting sand bars made navigation upstream extraordinarily difficult). It was also the place where the Lewis and Clark Expedition finally reached the Pacific Ocean. 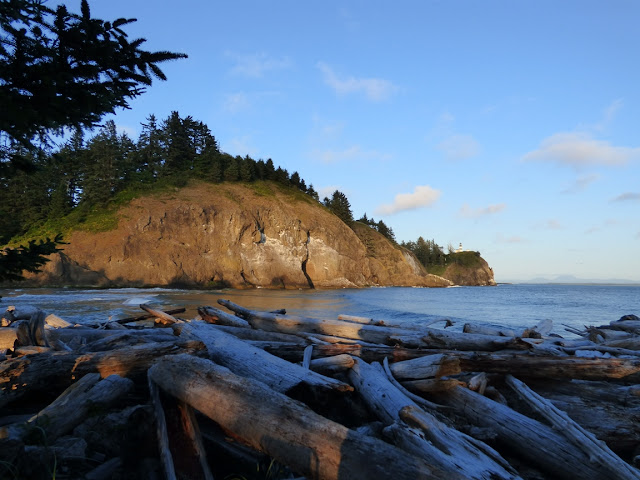 The construction of a huge jetty to make navigation on the Columbia River a bit safer caused sand to back up against the rock barrier, forming an extensive beach where none existed before. The site is now a state park and national historical park. There is a nice campground where we enjoyed some rare sun the other day (Cape Disappointment is said to be the foggiest place in the United States).

There are two lighthouses on the peninsula, due to the aforementioned hazards. Around 200 ships were wrecked in the immediate vicinity over the years.
Posted by Garry Hayes at 10:49 AM