The Hawai'i That Was: Mauna O Wakea, the Opening to the Heavens, and the Realm of Ice 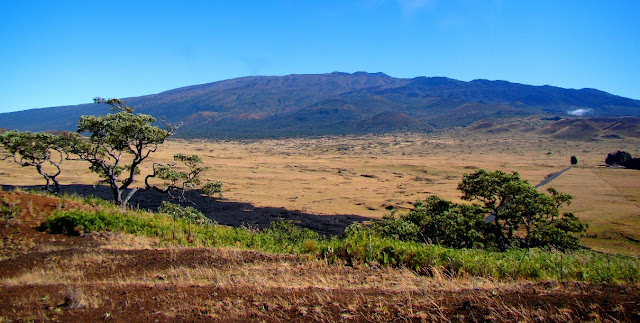 It's hard for me as a person of European descent to imagine what the first Polynesians to arrive at the islands thought of Hawaii's highest mountain. Mauna Kea, the "White Mountain", or Mauna O Wakea, the mountain of the god Wakea, the "expanse of the sky", rises to a height of 13,802 feet (4,207 meters), just slightly higher than its more massive neighbor Mauna Loa (13,679 feet; 4,169 meters). It's a reasonable assumption (spoken here by the amateur) that the first people to arrive had no cultural memories of erupting volcanoes, but even more to the point, no cultural memories of ice. But ice is what they found on Mauna Kea and Mauna Loa.
Wait a moment. Ice? Snow? In Hawai'i? It's true that the islands are in the tropics, but altitude makes up for a lot where snow and ice are concerned. In other parts of the world near the equator, for instance the Andes and the Himalayas, glaciers and snow are not unusual. But none of the other islands of Polynesia approach an elevation anywhere close to that of Mauna Loa and Mauna Kea (along with Haleakala on the island of Maui). Snow often falls in winter, and storms in summer sometimes leave ice on the summit (the snow patches in picture below are from June of 2009). During the ice ages, Mauna Kea was even covered by glaciers! During at least two periods, between 70,000 and 150,000 years ago, and from 10,000 to 40,000 years ago, glacial ice covered about 28 square miles of the mountain's summit. Lava flows that were quenched by the ice produced an unusually hard basaltic rock that was prized by Native Hawaiians for tool-making in the years before iron arrived on the islands, carried by Europeans ships. 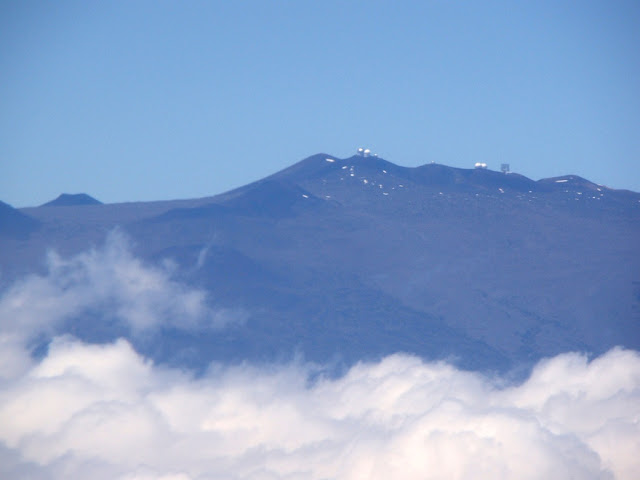 The Polynesians may have had their origins in New Guinea or Taiwan, but something more than a thousand years may have separated the native Hawaiians from any ancestors who ever laid eyes on snow-covered mountains. This was something new for them. The strange landscape of Mauna Kea soon became to them a holy place, a spot that was the origin of all people as a result of the relationship of the gods Wakea (the aforementioned "expanse of the sky") and Papahānaumoku (the Earth mother, or "she who gave birth to the islands"). Many on the islands continue their traditions of worship on the mountain (below).
And that's where the conflict starts. Wakea is the god of the "expanse of the heavens", and the summit of Mauna Kea certainly offers what may be the world's best view of the heavens, due to the high elevation (over more than 40% of the atmosphere), very low air turbulence, lack of light pollution, and the extremely clean dry air, far from any sources of pollution. The relatively gentle slopes provide for vehicular access. Since 1970, 13 state-of-the-art observatories have been constructed on the summit of Mauna Kea. The fourteenth observatory was supposed to begin construction last year, but massive protests and a legal suit have postponed any further building for the time being. 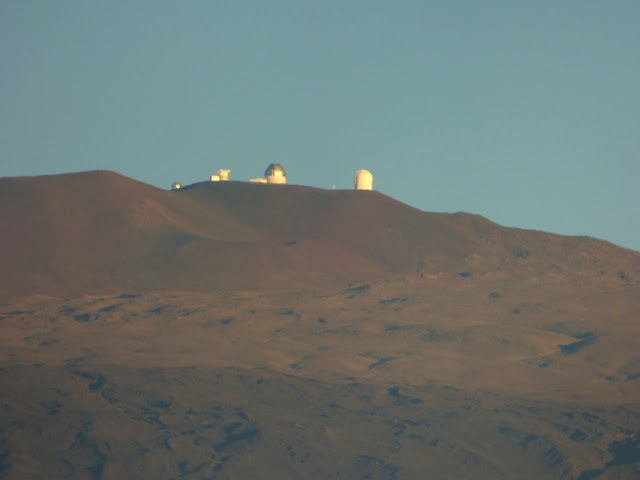 It's a conundrum. The argument isn't simply a religion versus science debate. There are concerns about the effect of the project on the ecosystems of the mountain, as well as the movement of groundwater. A great many endemic and endangered species cling to existence on the upper slopes of the mountain. Some of those who are invested in the sacred aspects of the debate don't actually oppose the telescope, seeing a relationship between a god who represents "the expanse of the skies" with the new-found ability of humans to see farther into the cosmos using the technology that we have created. Others most certainly see the construction of yet another observatory (and the biggest one yet, with a larger "footprint") as a desecration of sacred ground. Imagine, perhaps, building a group of telescopes on the summit of Mount Sinai. There might be good scientific reasons for choosing the site, but it wouldn't sit well with those of the Jewish, Christian and Islamic faiths. 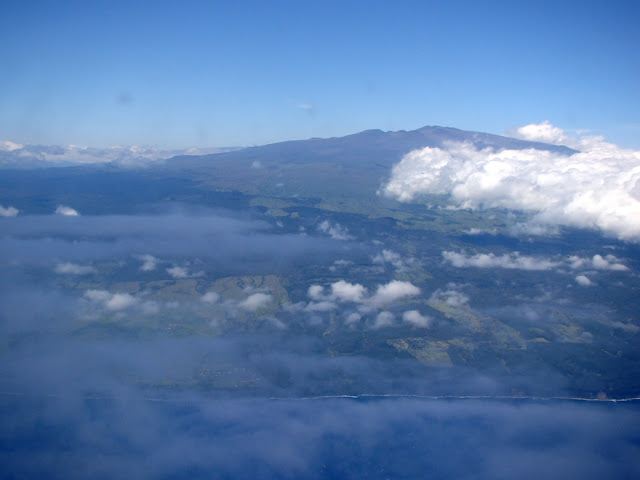 Mauna Kea has been erupting for perhaps 1,000,000 years, but it is hard to say, since younger flows have covered the older ones. The volcano is presently dormant, with no eruptions any time within the last 4,500 years. That doesn't mean it is dead. A new eruption at the summit could certainly make any discussions concerning telescope-building moot (although some would consider it a statement from Wakea). 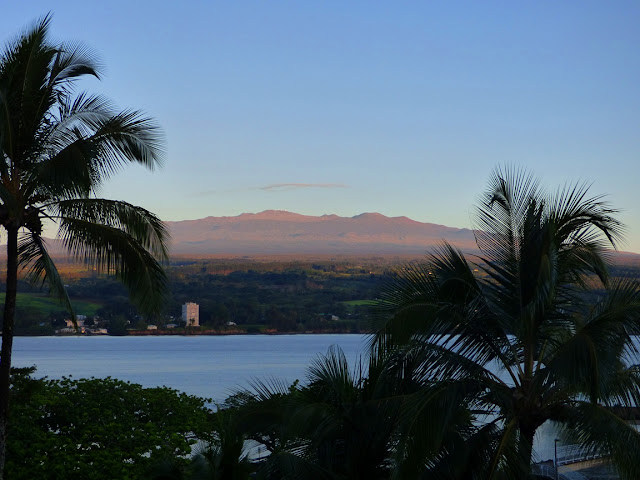 We saw Mauna Kea from several directions during our recent exploration of the island. It greeted on clear mornings from our hotel in Hilo (above), and we had a spectacular view of the mountain from the upper slopes of Kohala, another long-dormant shield on the north end of the Big Island (below). One evening we drove to the Onizuka Center for International Astronomy at the 9,000 foot level of the mountain for a star-viewing (these are held nightly). The skies are truly pristine, and our students saw the constellation of the Southern Cross for the first time in their lives (it of course lies hidden beneath the horizon in our more northerly climes).
This post is part of a blog series on the Hawai'i That Was, an exploration of the pre-human, and pre-European history of the Hawaiian Islands, which was the objective of the field course we conducted a few weeks ago. In the next post, we will move on from Hilo and the active volcanoes and have a look at the Kona Coast.