The Hawai'i That Was: Where are the Rivers? Waterfalls on the Big Island 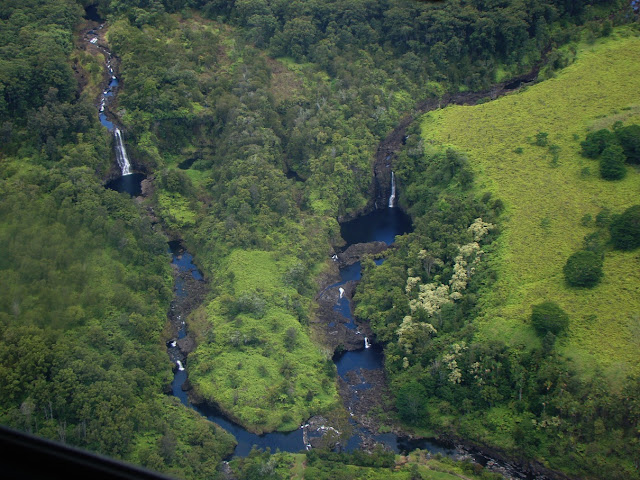 Tooling around on the southern parts of the Big Island of Hawai'i, one may notice something. Despite the fact that Hilo and the Puna District villages get more rain than any other towns in the United States, there aren't very many rivers. The area is a rainforest, but there are hardly any areas of open water. In fact, a drive around the most of the island, say from Hawi on the north end through Kailua-Kona, around South Point and along the slopes of Mauna Loa and Kilauea, I can't recall seeing a single flow of water. There are a number of reasons. For one, some areas lie in the rain shadow of the big volcanoes. The area north of Kona is practically a desert. On the slopes of Mauna Loa and Kilauea, the reason has to do with the volcanoes themselves.
Basalt lava, the product of Hawai'i's volcanoes, is not a particularly permeable rock. There might be vesicles (gas bubbles) that can allow water to move through, but by and large basalt is solid and impermeable. Except when it cools. The rock contracts and shrinks, forming joints and fractures. These cracks provide avenues for water to sink into the ground. There might be plenty of water, but it flows through subterranean fissures, not on the surface. It might re-emerge along the coastline as springs, but in some cases the water flows into the ocean beneath sea level. There are places along the south coast of the Big Island where the only fresh water could be collected by the original Hawaiians by diving beneath the surf with water containers.
The longest river in the Hawaiian Islands is the Wailuku, which runs for 28 miles mostly along the boundary between the lavas of Mauna Kea and Mauna Loa, then flowing into Hilo Bay. Although large volumes of water disappear underground, the path of the river partly follows much older Mauna Kea lavas that have weathered and form soil and clay that are more impermeable, keeping the water at the surface. In places, erosion has broken through to breccias and cinder layers that are more easily eroded, undercutting the lava flows. In this way, some beautiful waterfalls have formed. The most famous is undoubtedly Rainbow Falls (above), given the location near downtown Hilo.

The falls, known in the Hawaiian language as Waianuenue, are steeped in mythology. Stories have grown around the prominent cave behind the falls. It was the abode of Hina, the mother of Maui, the god who created the islands by tricking his brothers into pulling up part of the seafloor, thinking they were hauling in giant fish. A lizard-like monster called Mo`o Kuna kept threatening Hina by sending floods and debris down the river (floods are a common occurrence along the river). Maui came to the aid of his mother, defeating Mo'o Kuna and sending his carcass down the river.

Pe'epe'e Falls are a short distance upstream, and Wai'ale Falls can be seen a bit further up. Wai'ale tends to have the greater volume as water seeps into the ground downstream.
On the Big Island of Hawai'i, the real world of waterfalls lies along the northeast coast between Hilo and the Polulu Valley. They occur on the flanks of Mauna Kea and Kohala, two of the older and mostly inactive volcanoes of the island. Some of the falls are world class in height, with at least one, Waihilau, falling 2,600 feet, which is actually taller than Yosemite Falls in California. I would love to regale you with stories of my adventures seeking out the giant falls in their remote valleys, but I haven't done that yet. We'll settle for a beautiful and accessible waterfall north of Hilo. It's called Akaka Falls, which drops about 420 feet. There is a short paved trail that provides a dramatic view. 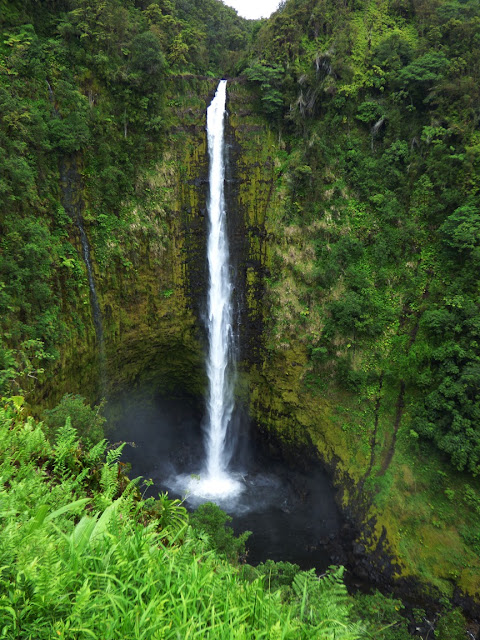 This blog series, the Hawai'i That Was, is an exploration of the geology and anthropology of the islands, based loosely on our recently completed field course. I expect that the next post will be a bit sandy...and crawling with turtles. Stay tuned!
Posted by Garry Hayes at 11:20 PM