The Way it Was Today: Fall (and a bit of Winter) in Yosemite Valley 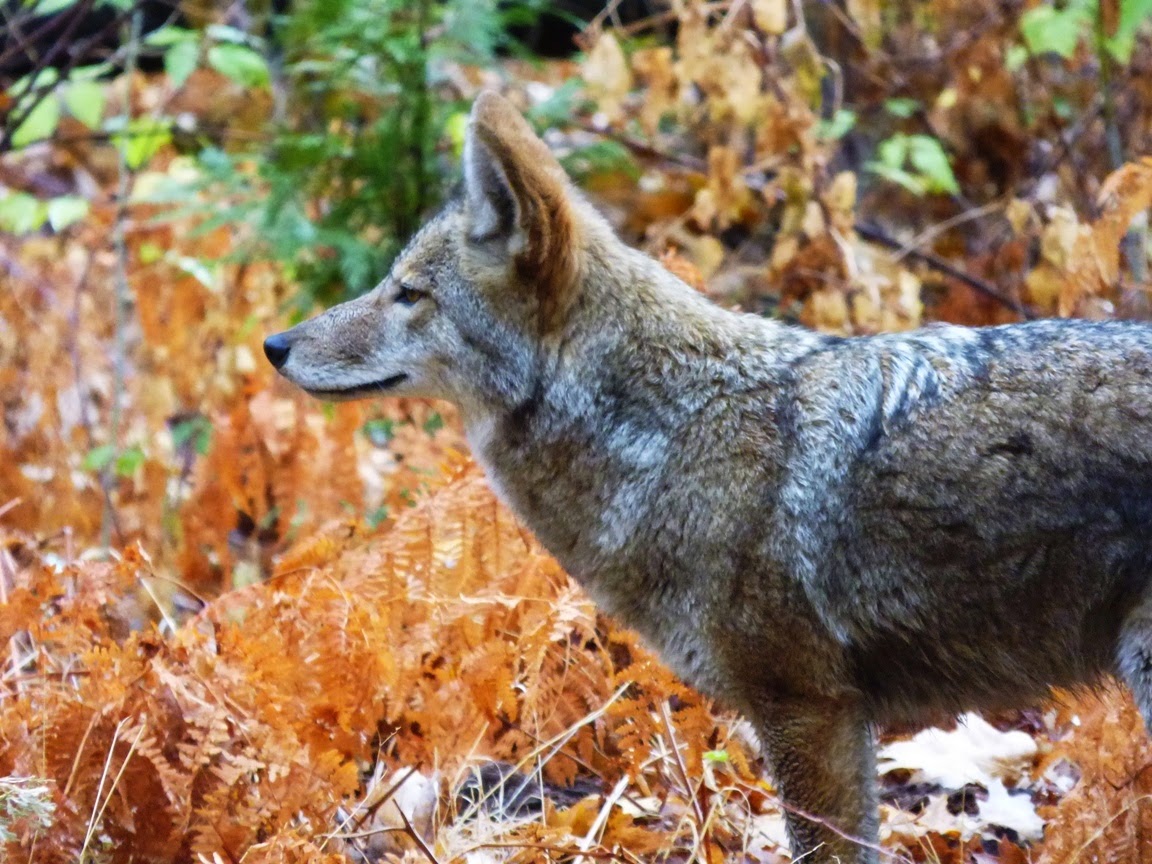 It always comes back to Yosemite. I travel many places, explore many mountains, see the most incredible geology, but the circle of my life always involves a valley of granite in the Sierra Nevada. I was thinking about why this afternoon during a bit of free time while my students were on a project. I was walking from Yosemite Lodge to Happy Isles, a stroll of three miles or so, and I realized it was this: there are the memorable spots you will visit once or twice in a lifetime to be impressed by, and there are those special places that by circumstance you are allowed to return to time and time again. I live just a two hour drive from Yosemite National Park. I'm guessing I've been there at least 80 times in the last quarter century. I've explored it in every season of the year, in wet years and dry, recently burned and recently flooded. And every time there is something new.

Today I was walking across Cook Meadow near Sentinel Bridge when I heard someone pad up behind me on the boardwalk and then jump off into the meadow. I was about to tell them to stay off the meadow grass when I realized it wasn't a person, it was a coyote, and I was in its way. It trotted around me and back onto the boardwalk and into the forest. We were going the same way so I followed for awhile until it passed some fawns, a doe, and buck in the forest. They ignored me too 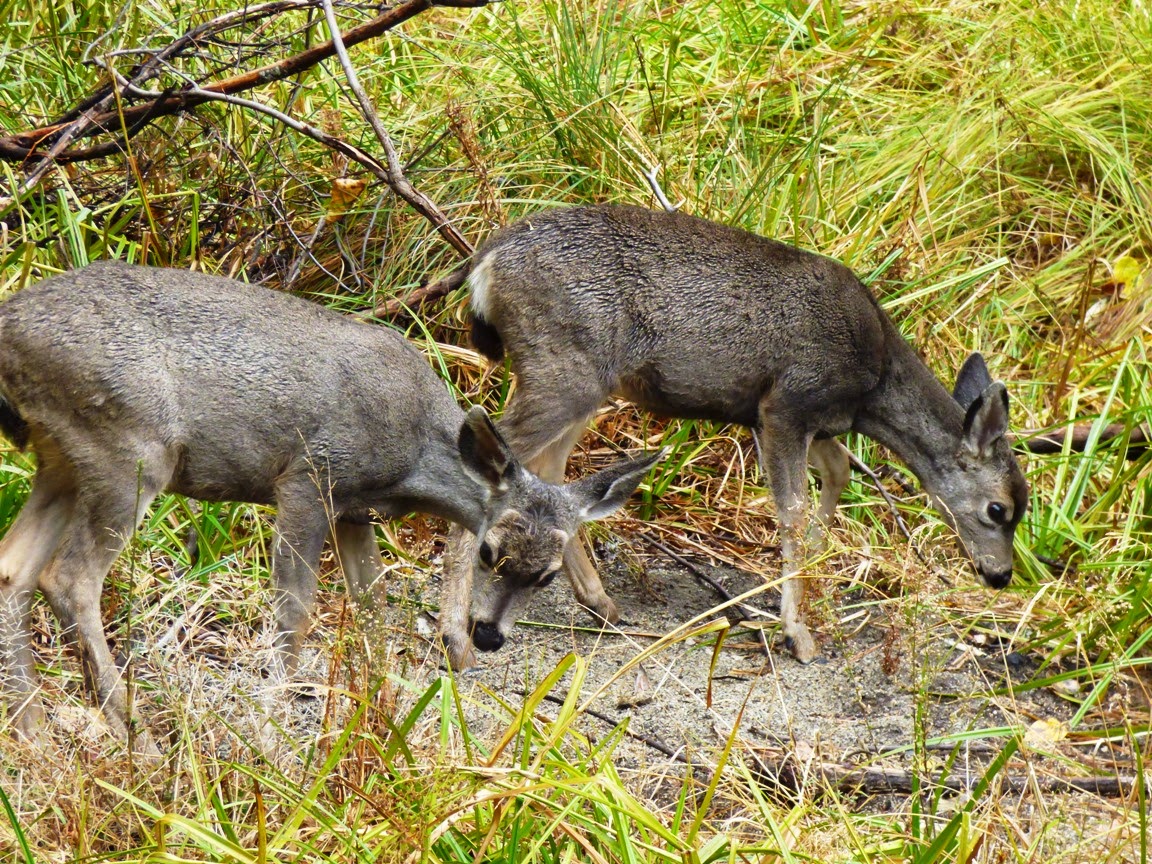 The fall colors were stunning (yes easterners, I know that word should only be reserved for New England and such places, but in California any bright colors impress). The Merced River was at the seasonal low point and the surface of the river was a mirror. 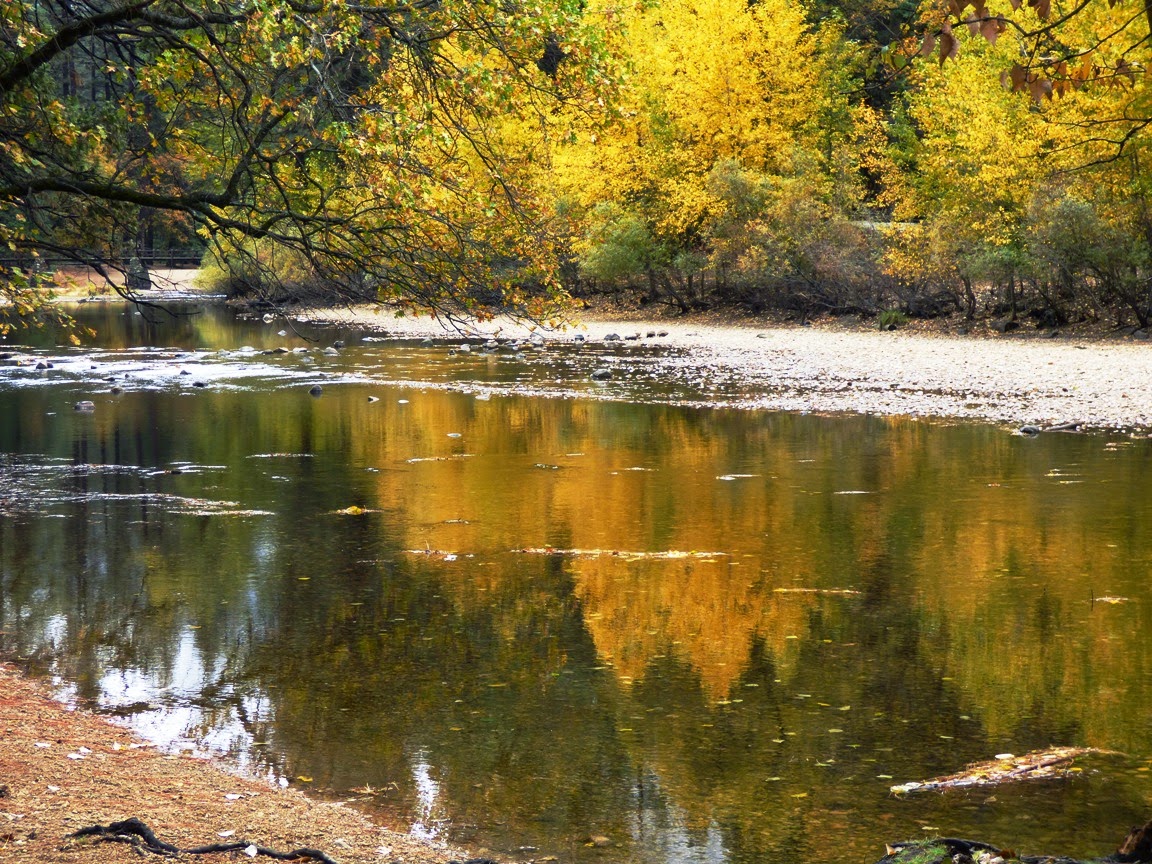 We had arrived literally on the heels of the first major storm of the year which overnight had dropped an inch or more of rain in the valley and a foot of snow in the high country. It was still drizzling and the clouds obscured the cliffs, so my attention was mostly on things close at hand. 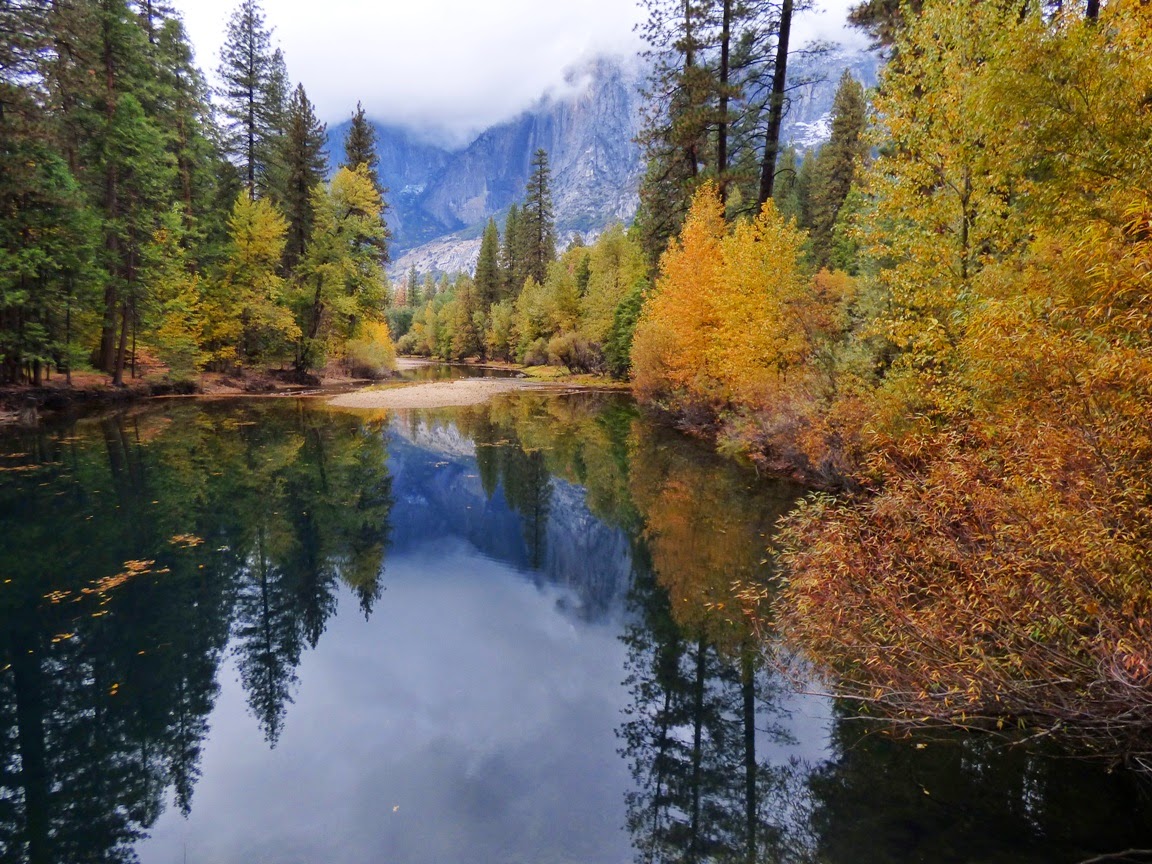 It wasn't much, but the rain rejuvenated Yosemite Falls for the first time in many months. A trickle is barely visible in the picture above. 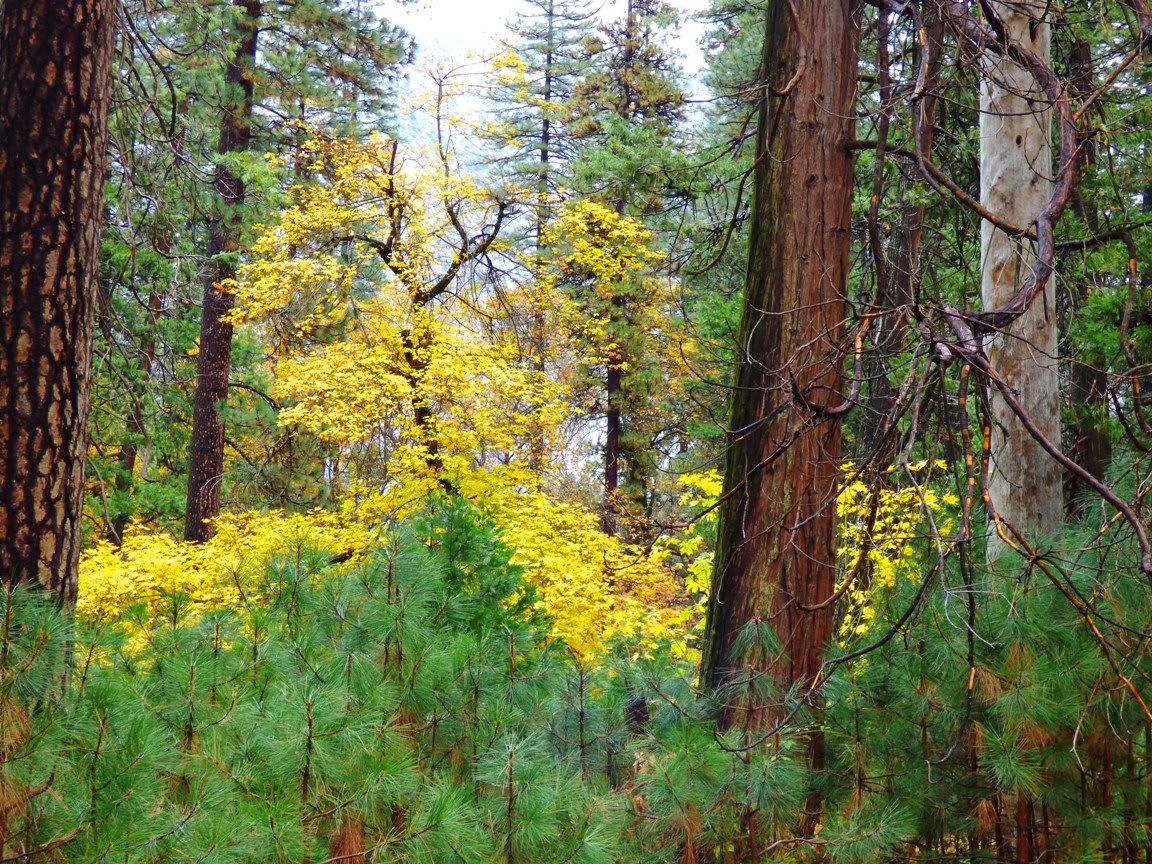 The Oaks and Dogwood trees added a splash of yellow, orange and pink to the scenery. 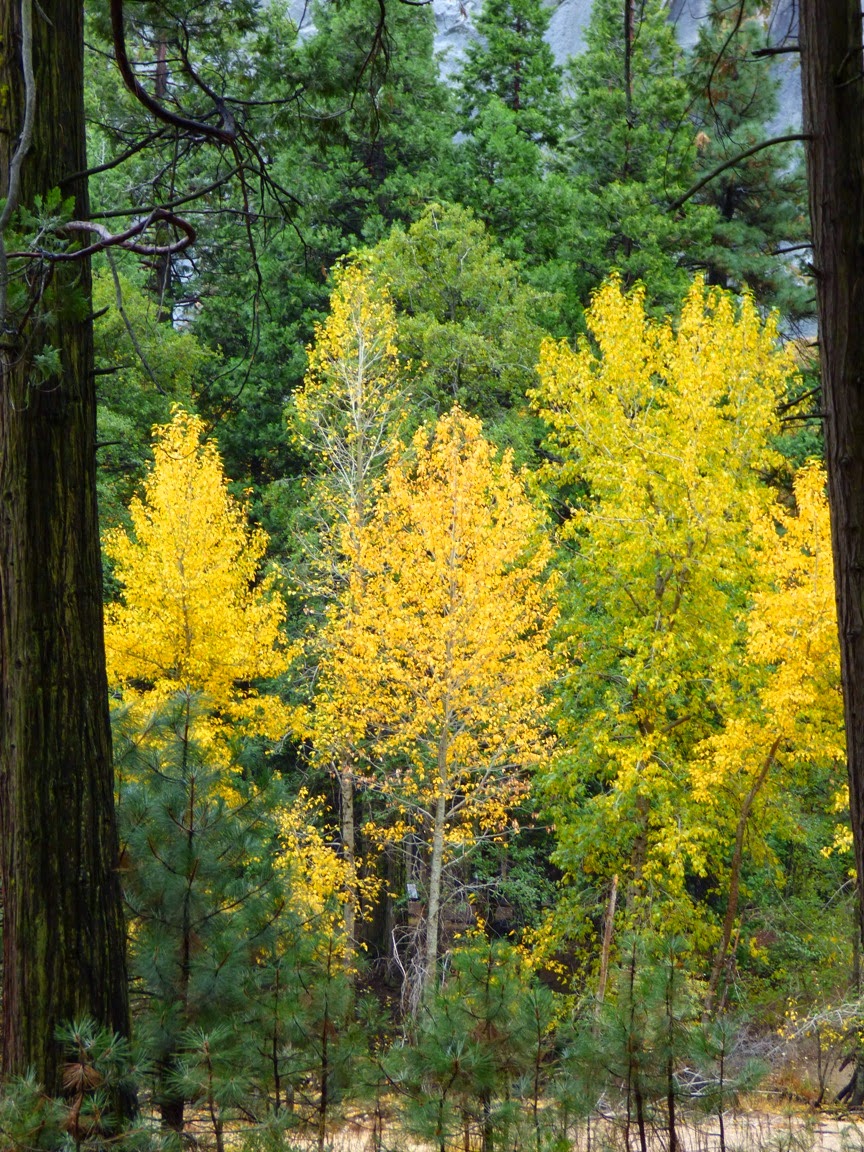 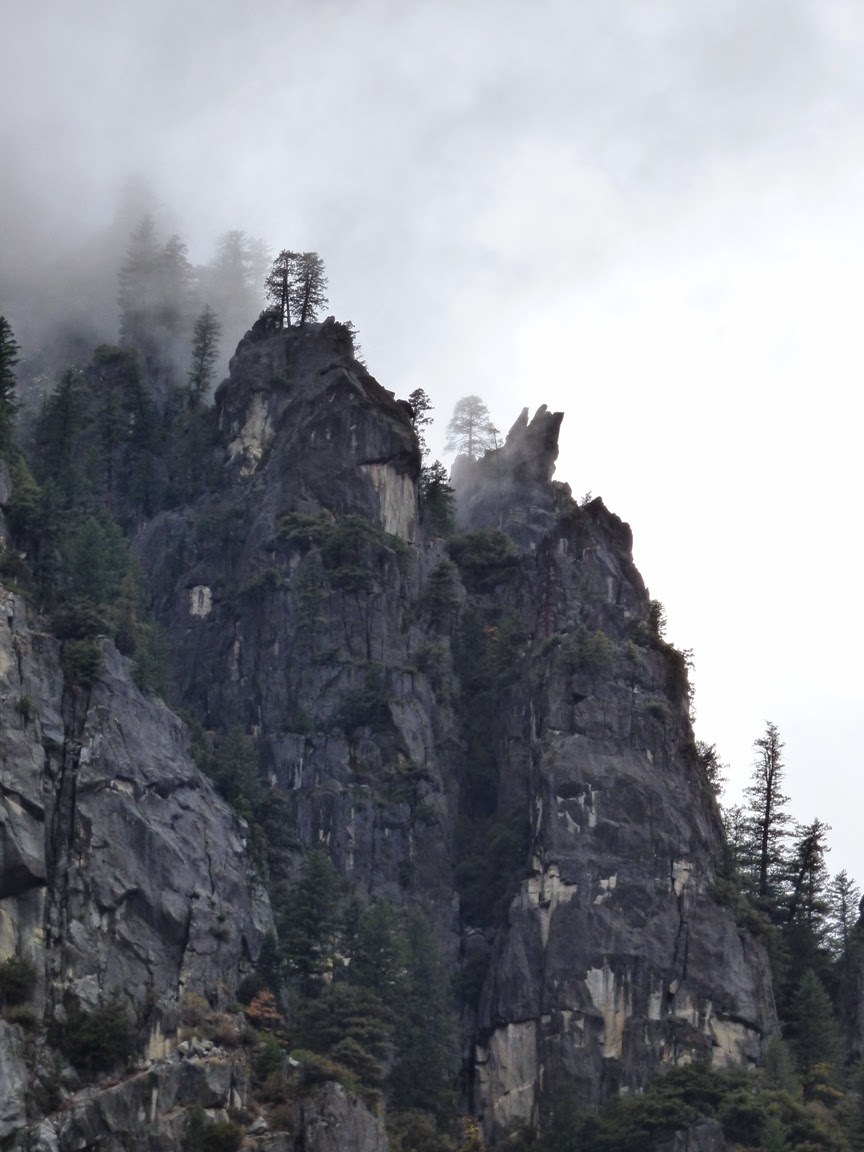 The clouds started to lift and move on, revealing ghostly cliffs and stony ramparts up above. Sentinel Rock appeared first (above). Snow clung to every tree branch in the forest above. 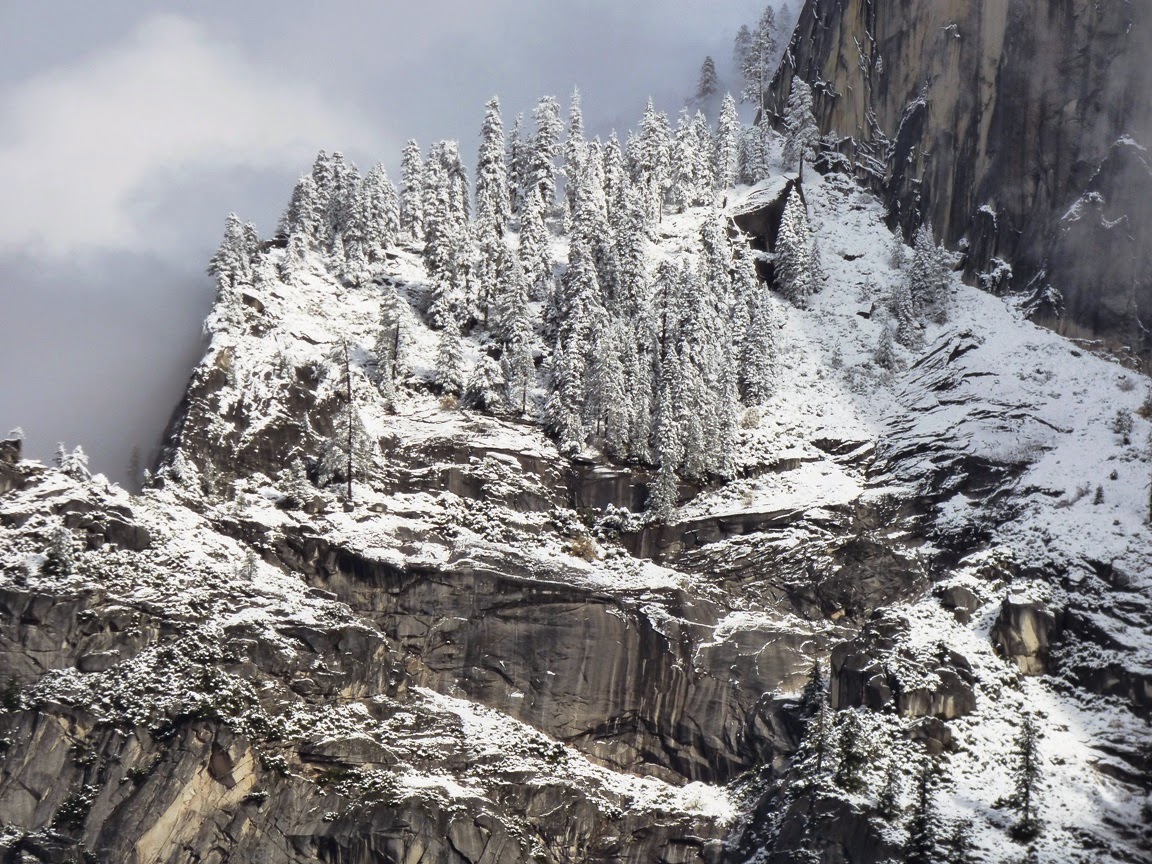 Finally the skies started to clear over the monarch of the upper valley, Half Dome. 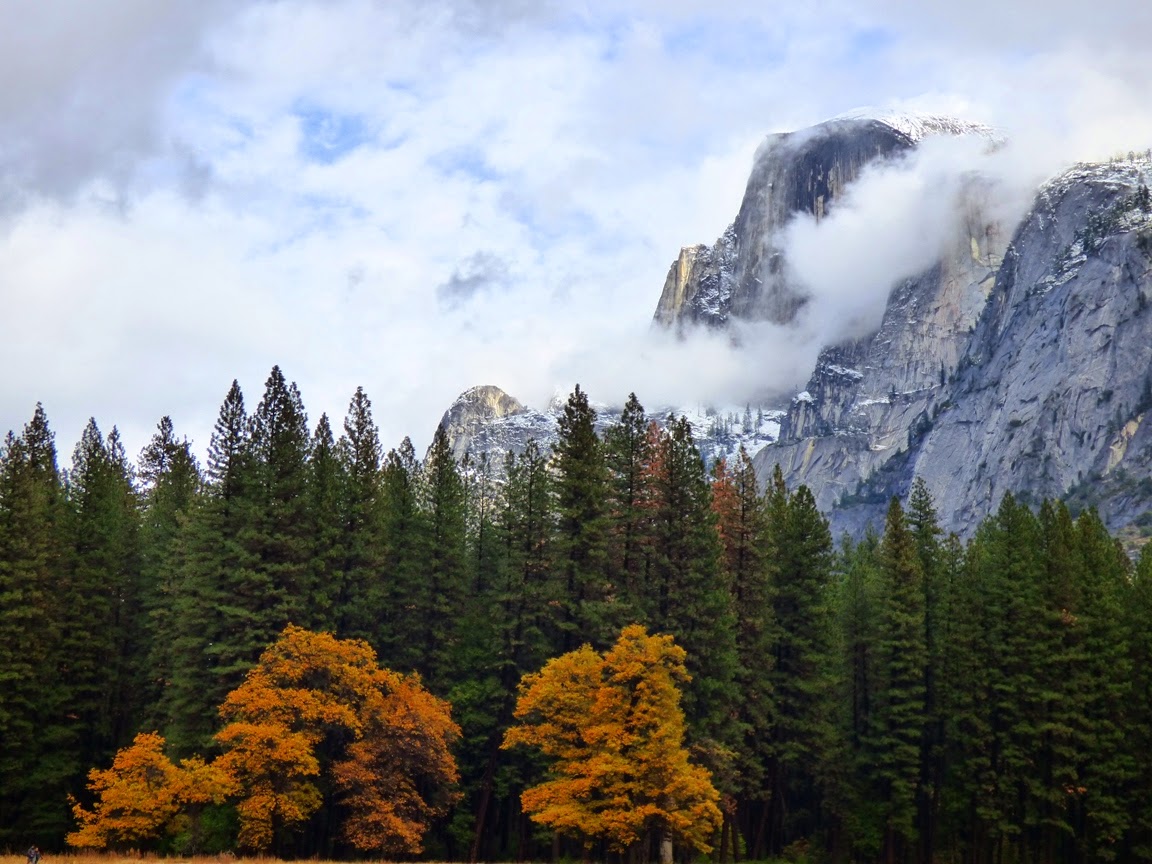 Closer at hand a Raven was watching for any dropped tidbits from the students who were waiting for the tram. 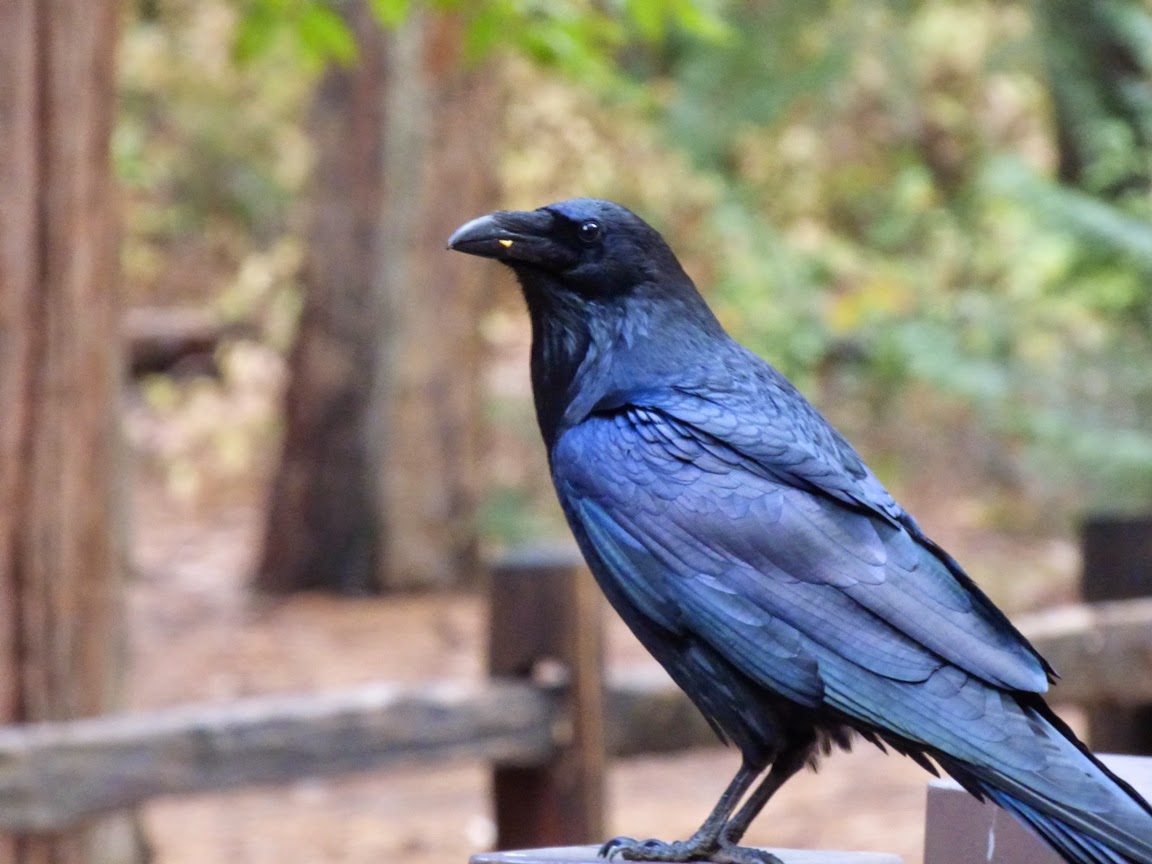 We stopped near Yosemite Falls to talk about hanging valleys, but Half Dome still captured most of the attention. It gains new depth when wreathed in clouds. 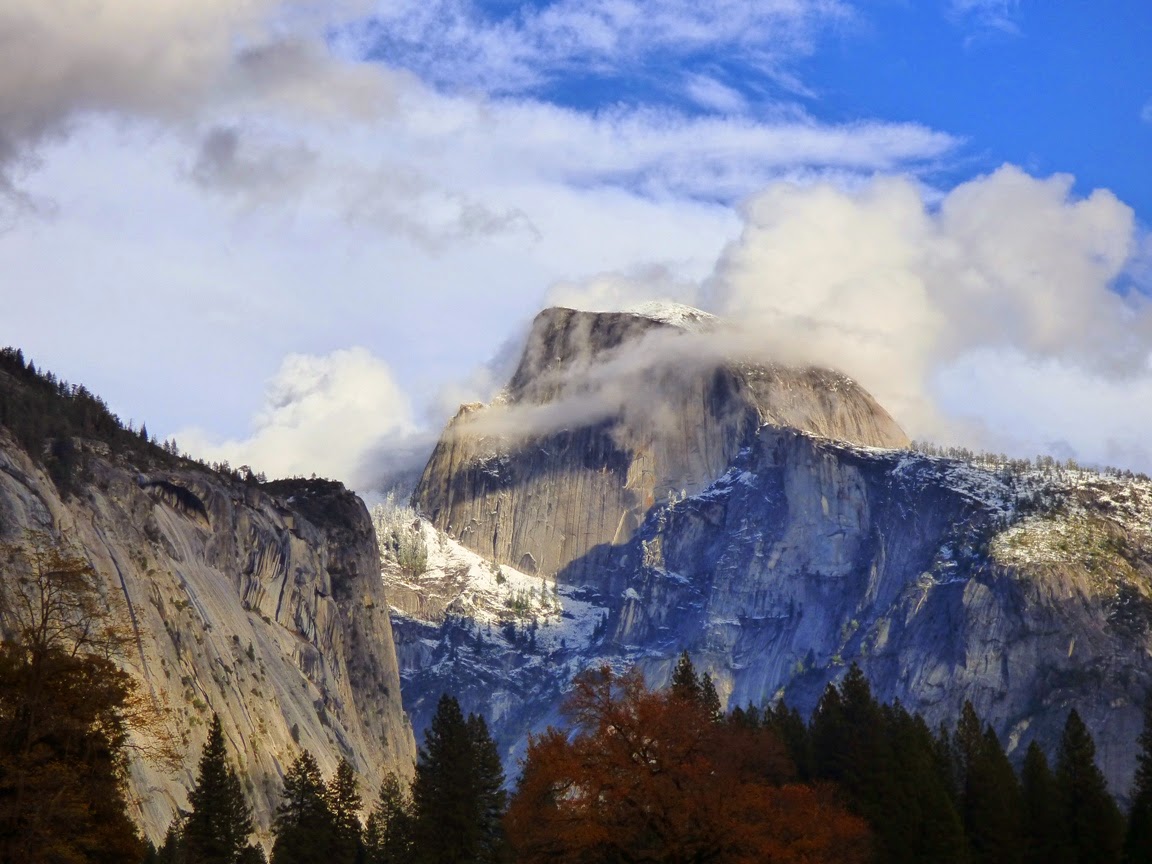 We had skipped Tunnel View at the beginning of the day because nothing would have been visible. The situation was different in the late afternoon. We headed up for a look, and it was nothing short of spectacular. I've got only a few (okay, many) hundreds of pictures from this spot and it is never the same. Today was special. 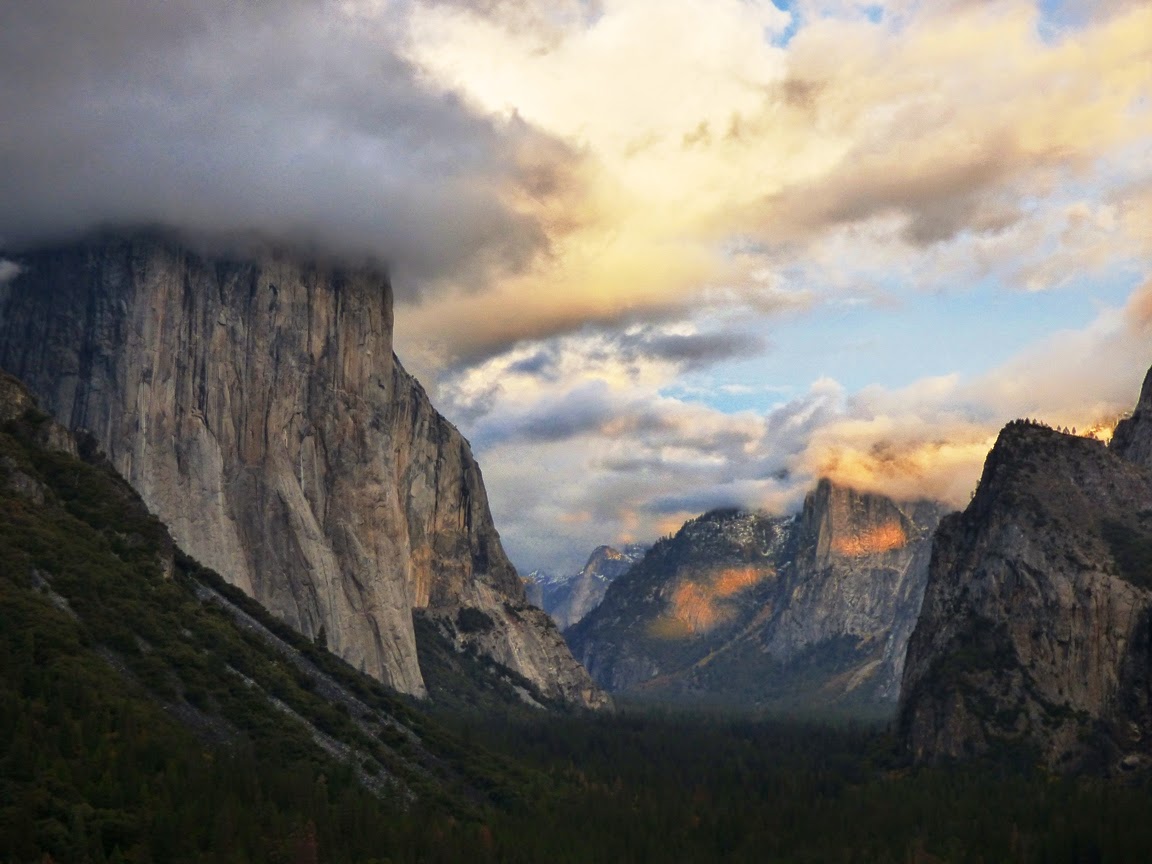 The last rays of the sun were vanishing as we left the valley for home. 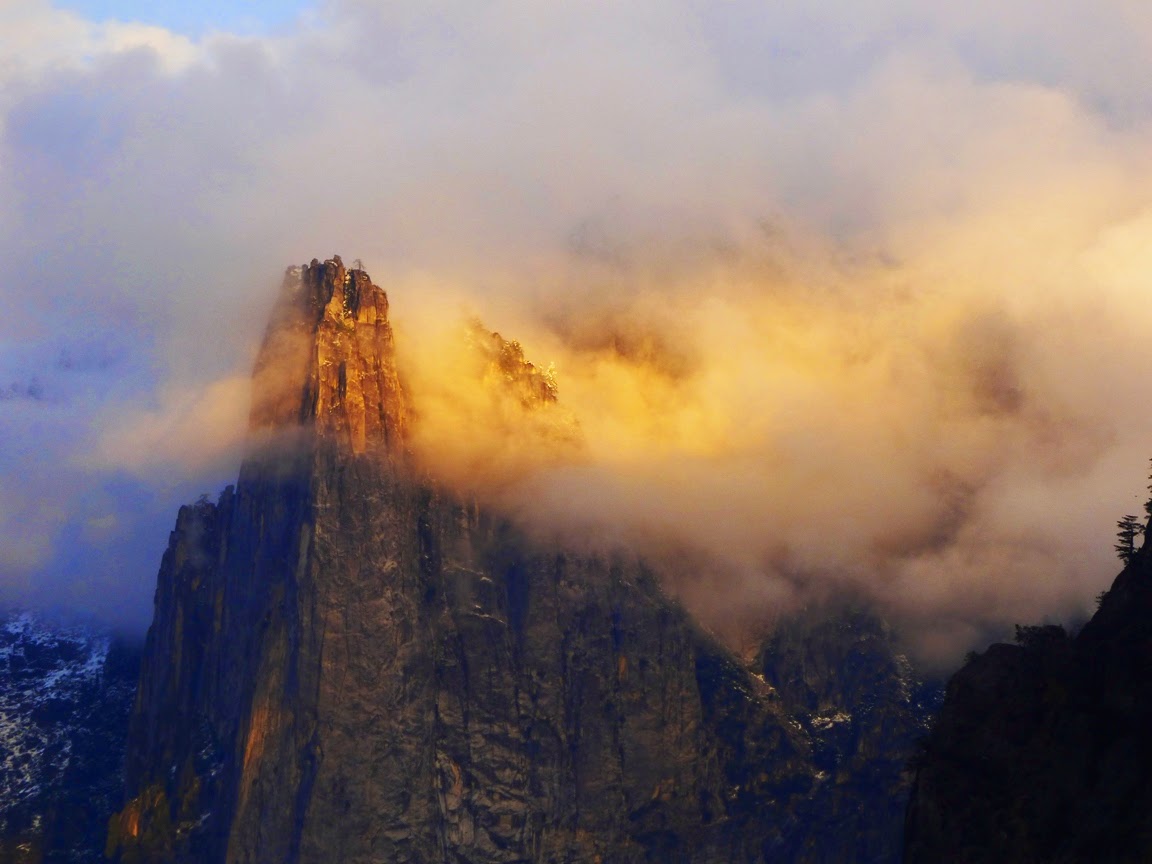 And that's the way it was today in Yosemite, my special place. Come and see it when you can!

Wow, looks like you caught one of those magical days in Yosemite. Fantastic photos, especially the coyote shot.