What happens when a Canada Goose goes on a tropical vacation?

Can you imagine a four foot long goose? That's what happens when a Canada Goose decides to take a tropical vacation and chooses to stick around.

I've been developing another blog over the last few months as an outlet for my new hobby, bird photography (Geotripper's California Birds). I'm not an expert (yet), nor a hard-case birder (yet), but my friends and coworkers have come to recognize that if I'm walking around somewhere, I am inevitably carrying a camera. The blog is mostly about my bird observations in California and the west, but I started getting interested in birds during my travels in Hawaii beginning in 2002. I consider these two separate projects, but sometimes the subject matter overlaps. Evolution is one of those subjects, as is hot spot volcanism (i.e. Hawaii). What follows is today's post from the California Birds blog: 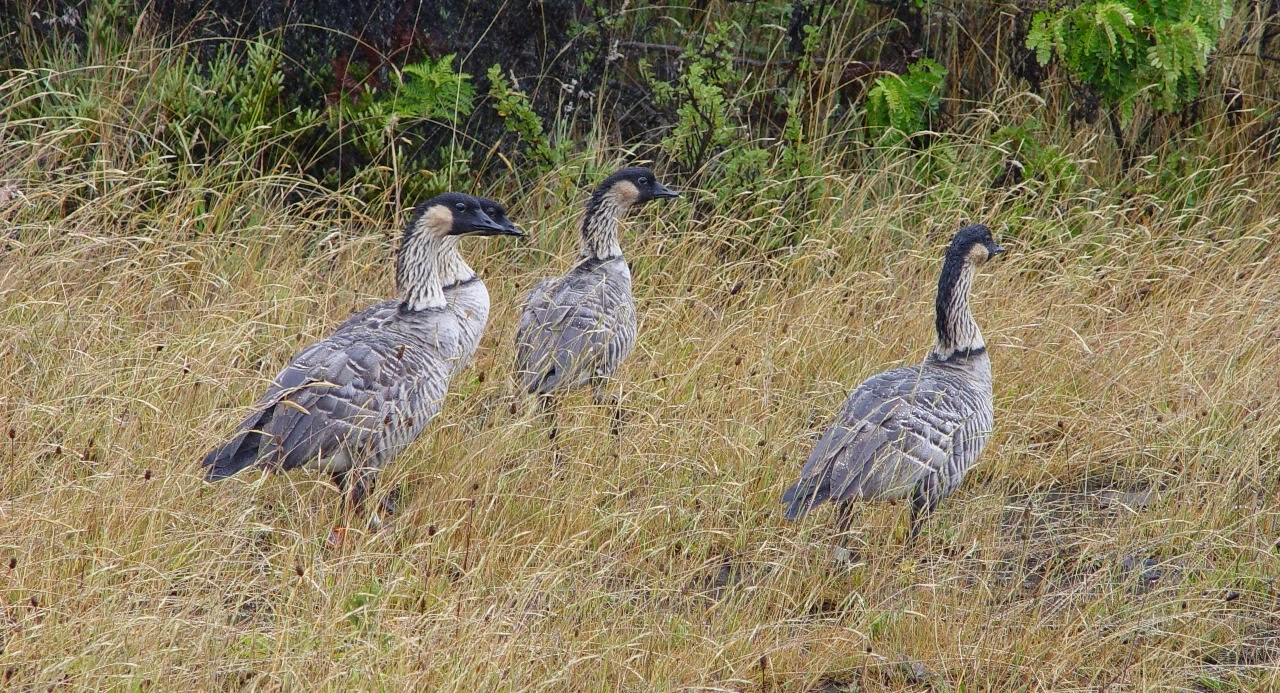 Perhaps 500,000 years ago, a pregnant Canada Goose, or a small flock of geese took a wrong turn. A really wrong turn. Somehow, flying along the coast of North America, the leader maybe decided to take a short cut, and it went poorly. Soon the shoreline was lost to view, and for days, not a single bit of land could be seen. I can imagine the flock becoming smaller and smaller as the weaker members fell behind and were lost.  After days of nothing but ocean, an island came into view. The tired geese landed and began looking for food. None of the plants were particularly familiar, but some proved edible and a few of the geese survived. For all we know, some of them rested up and left for further journeys, but a few stayed around. They took up residence on the volcanic island in the tropics of the Pacific Ocean, a vastly different environment than their summer home in the Canadian Arctic. The isolated volcanic edifices are today called the Hawaiian Islands.

During the millennia that followed, different flocks of geese took up residence in different ecological niches, such as lava flows, grassy slopes, and woodlands. Isolated groups began to diverge, and before long at least three species developed on the islands. One of them, the Giant Hawaiian Goose (species name not yet established), was big, almost four feet long. A lack of predators on the island made flight an energy-intensive but unneeded luxury, so the wings became smaller as the bird evolved to larger size. The goose was flightless. This worked fine for a long time, but humans ultimately arrived on the islands, and probably exterminated them, either by hunting, or by introduction of egg-eating rats, or by habitat destruction.

The second species was the nene-nui (Branta hylobadistes). It was also a big bird, but had larger wings so that it was still capable of weak flight. Like the Giant Hawaiian Goose, it became extinct soon after the arrival of humans on the islands. It has been characterized as a bird in evolutionary transition, in the midst of losing the ability to fly, but it went extinct first. Possibly because it couldn't fly well. 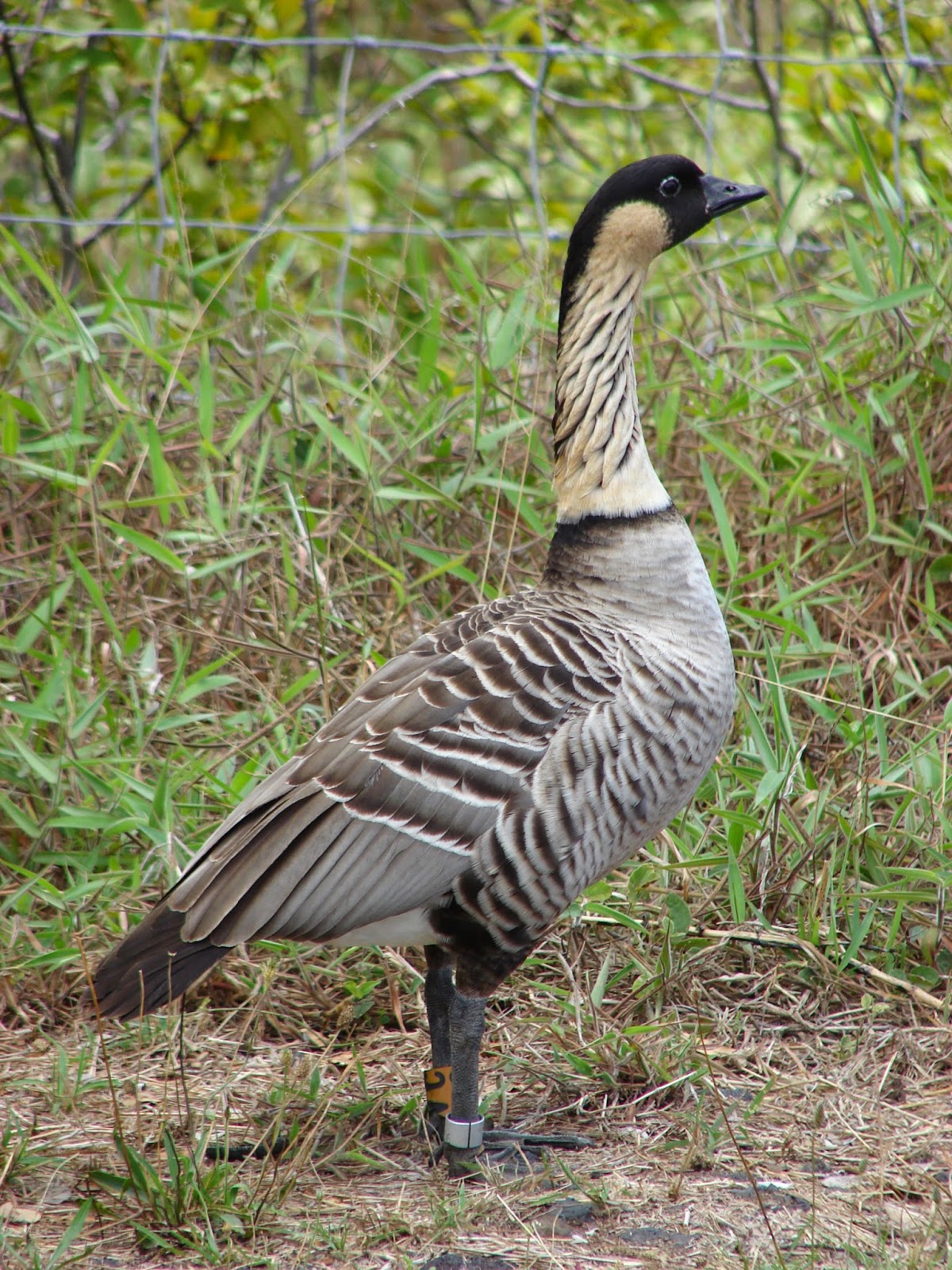 I didn't mean that as a flippant remark. Evolution is a process that has provided the incredible diversity on our planet, and isolated islands have provided the crucible in which much of the planet's diversity has arisen. But birds and other animals that have adapted to very specific situations are vulnerable when those situations are changed. The two extinct Hawaiian geese species were secure on the Hawaiian Islands, but the arrival of humans changed their environment too much and too fast. They were certainly easier to capture than a bird that could escape by flying.

The flying goose, the one that survived was the nene (Branta sandvicensis). The nene's wings were smaller than its Canadian ancestors, because it didn't need to migrate thousands of miles during the change of seasons. But it retained enough flying ability to escape from the island's human invaders. It differed from the Canada Goose in several other respects, including longer legs, reduced webbing between its toes, and a more erect posture. It is adapted to living on lava flows and grasslands, and was less dependent on wetlands than other geese.

It survived, but no longer thrived. Rats ate their eggs and chicks, and later on cats and mongooses were brought to the islands. The species was devastated, dropping from an estimated 25,000 when first European contact was made in 1778 to thirty individuals in 1952. A captive breeding program began, and populations were established on their ancient habitats on Maui and Kauai (where mongooses were never introduced). The wild population is now around 800, with another thousand or so in captivity. They are still highly endangered, but their prospects are slowly improving. They have been named the state bird of Hawaii. 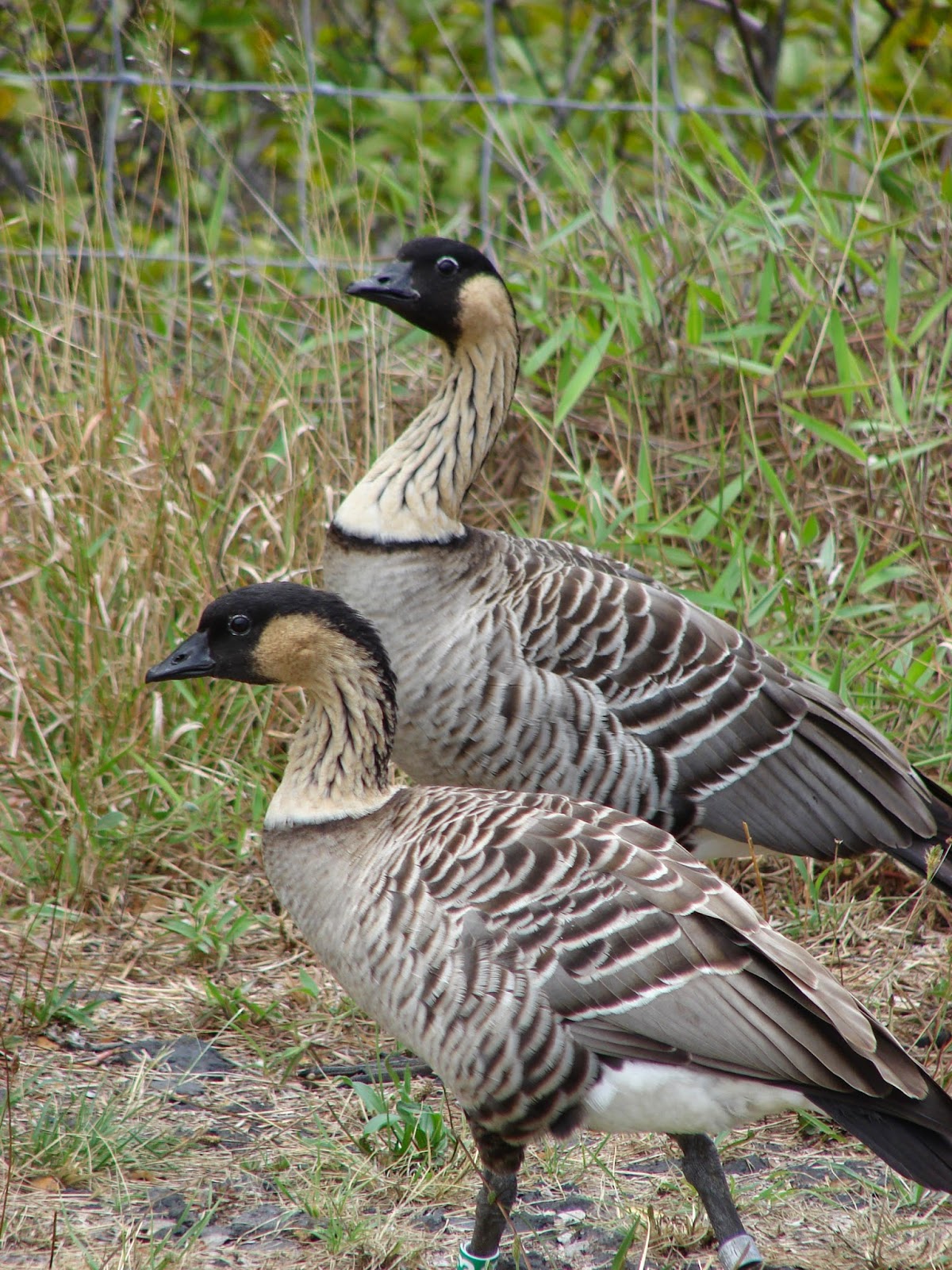 My travels in Hawaii were part of the inspiration for my new-found love of bird watching and bird photography. I've seen the nenes (pronounced "nay-nay") on Maui at Hosner Grove (the top picture), and on the flank of Kiluaea in Hawaii Volcanoes National Park on the Big Island (the other two pictures). It is awe-inspiring to observe the descendants of a few very unlucky Canada Geese (or lucky?) who made a wrong turn 500,000 years ago and survived a terrifying journey over a very large ocean. I'm glad were trying to help them survive, instead of driving them to extinction.

Are you interested in learning a bit more about these fascinating creatures? Here is a link for a National Geographic article on the evolution of the Hawaiian geese and their Canadian cousins, and the scholarly article of the research into the vanished species:

Good for you, branching out & ramping up your knowledge of different things. =) Super cool you got such great views of the nene--I'm not sure we ever saw one while we were over there. Even just the Slow Nene Area signs made me happy, though. You got such great shots! Nice work.

And, a friendly btw, as I was told in graduate school, when I said "Look at the Canadian geese!" My friend said "Canada geese. Never Canadian. They don't hold Canadian passports." =) I'll def. have to check out your new bloggage. =)

Well darn, I hate when I make those kinds of mistakes...fixed. Thanks.