A Different Canada Goose, the Cackling Kind: Evolution on the Continent

Isolation brings about evolutionary change, and the Canada Goose clan has been doing some changing over the last few thousand years, especially in Hawaii, but also here in California. Today's blog is cross-posted from my new birding blog, Geotripper's California Birds. 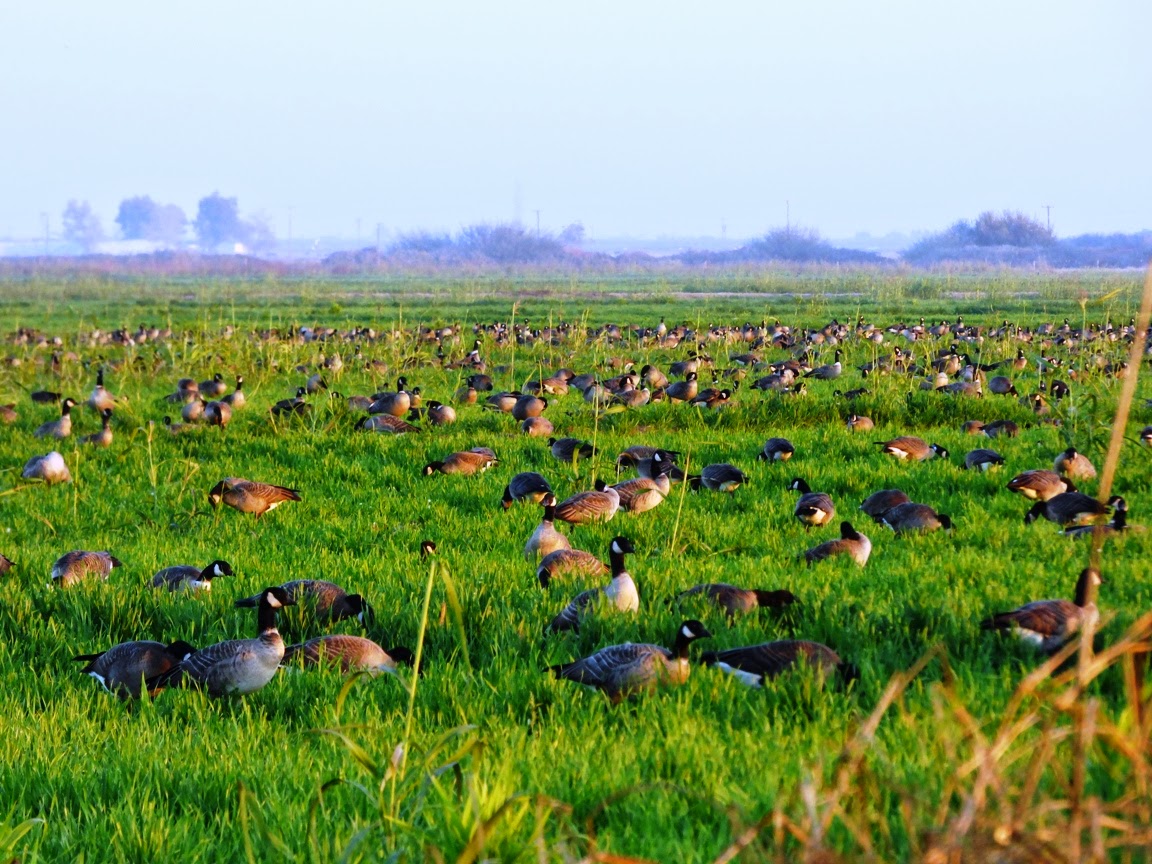 If you've ever been accosted by a Canada Goose at the local park, pictures like these might give you the shivers. If one of them can deliver a nasty bite, just imagine what a few thousand of them can do. But take heart, these scenes are no nightmare. They aren't even Canada Geese. The birds occupying this field in the San Joaquin National Wildlife Refuge west of Modesto are Aleutian Cackling Geese (Branta hutchinsii). It's true, though, that before 2005 they were Canada Geese. Allow me to explain. 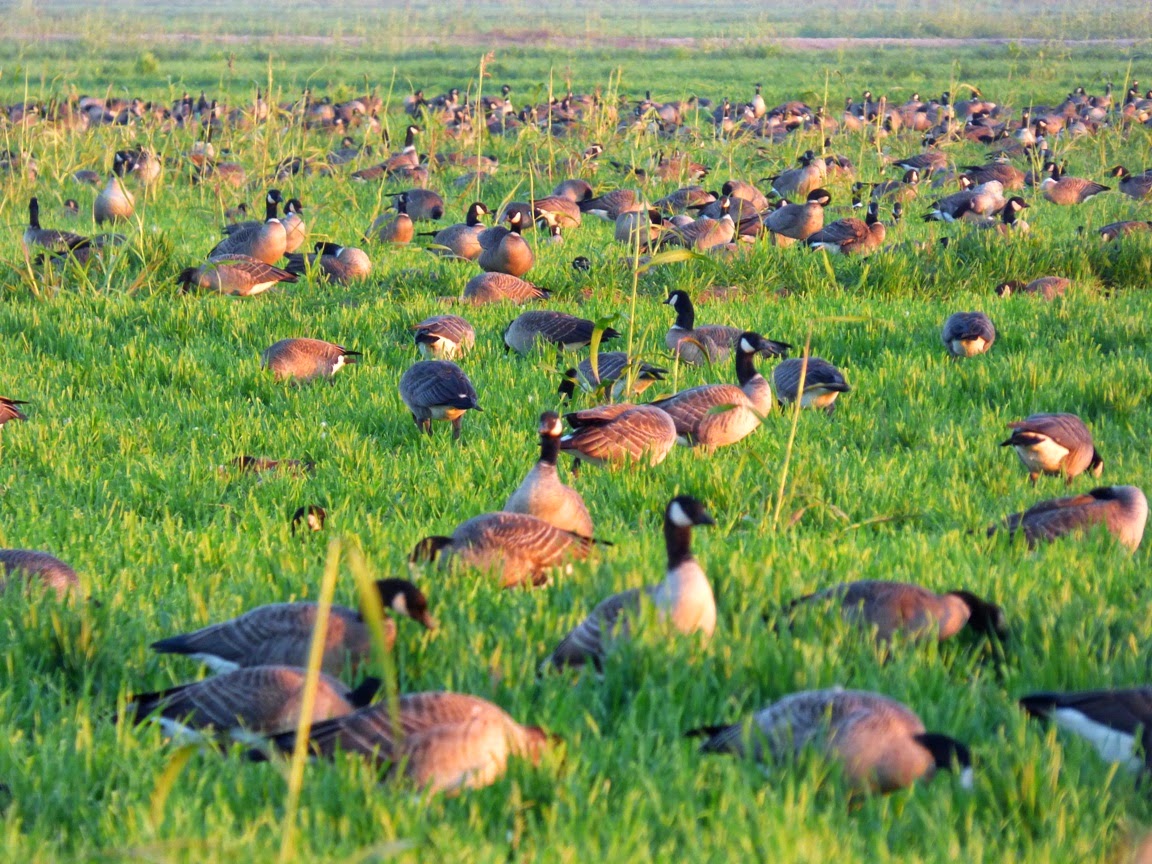 The Canada Goose lives in many environments, and in some cases particular flocks broke away and colonized different islands or territories (see yesterday's post for an extreme example). The presence or lack of food sources or differences in the nature of predators favored certain traits (size and behavior, for instance) in the young. The geese who summered on the Aleutian Islands were long recognized as a smaller subspecies of the Canada Goose, but recent DNA analysis has led researchers to consider these birds an entirely different species. And so these birds are not Canada Geese, they are the much smaller Aleutian Cackling Geese, which are genetically distinct from the Canada Goose. 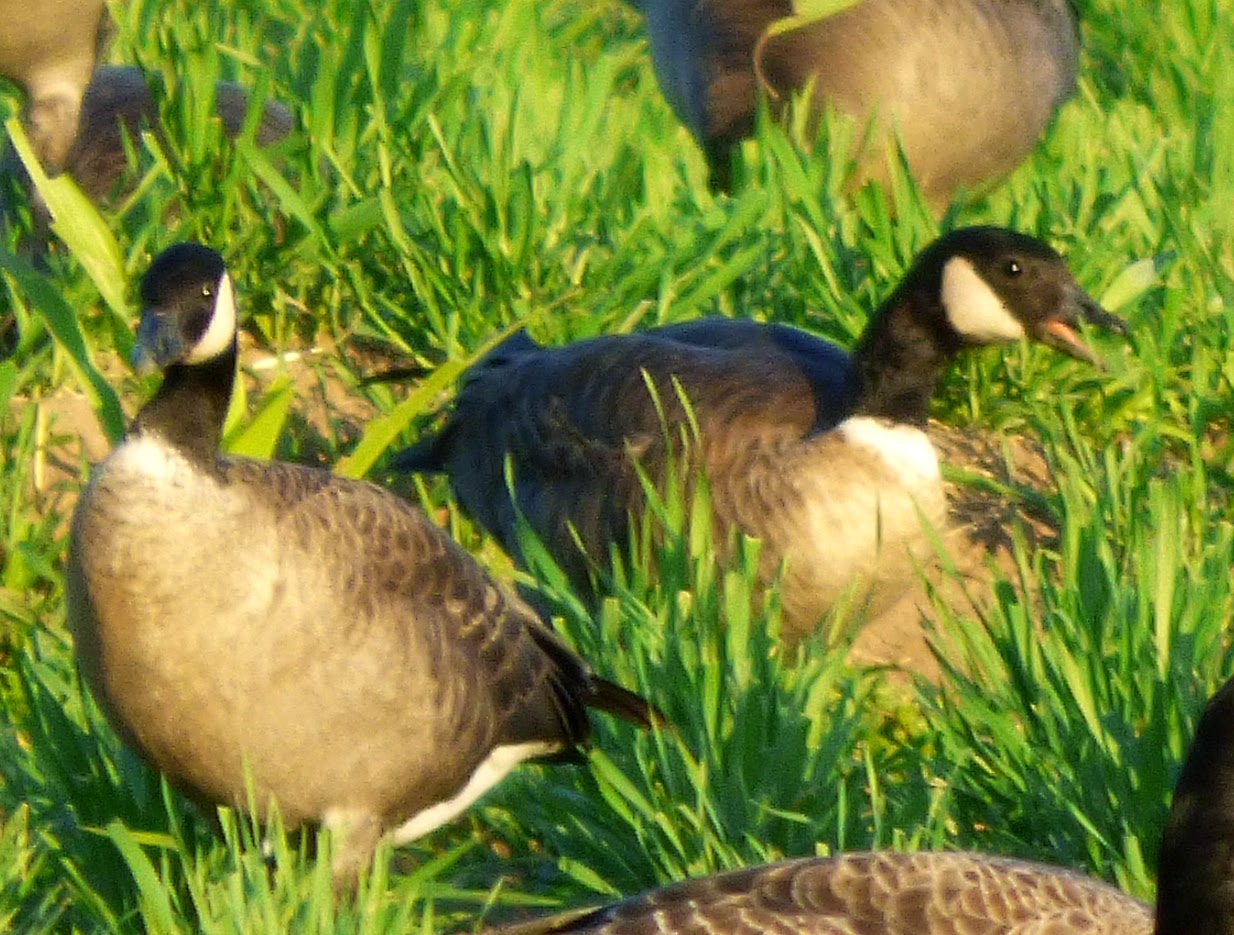 The Cackling Geese winter by the tens of thousands in the wildlife refuge a few miles west of my home. It is a stunning sight to see so many of the birds in one place. From the observation deck on Beckwith Road, one can see and hear thousands of birds taking off and landing, and in general making a racket (cackling, as it were). They have been encouraged to stay here instead of nearby agricultural fields through the planting of corn and other food plants. In April they will pick up and leave, headed north to breed in the Arctic. 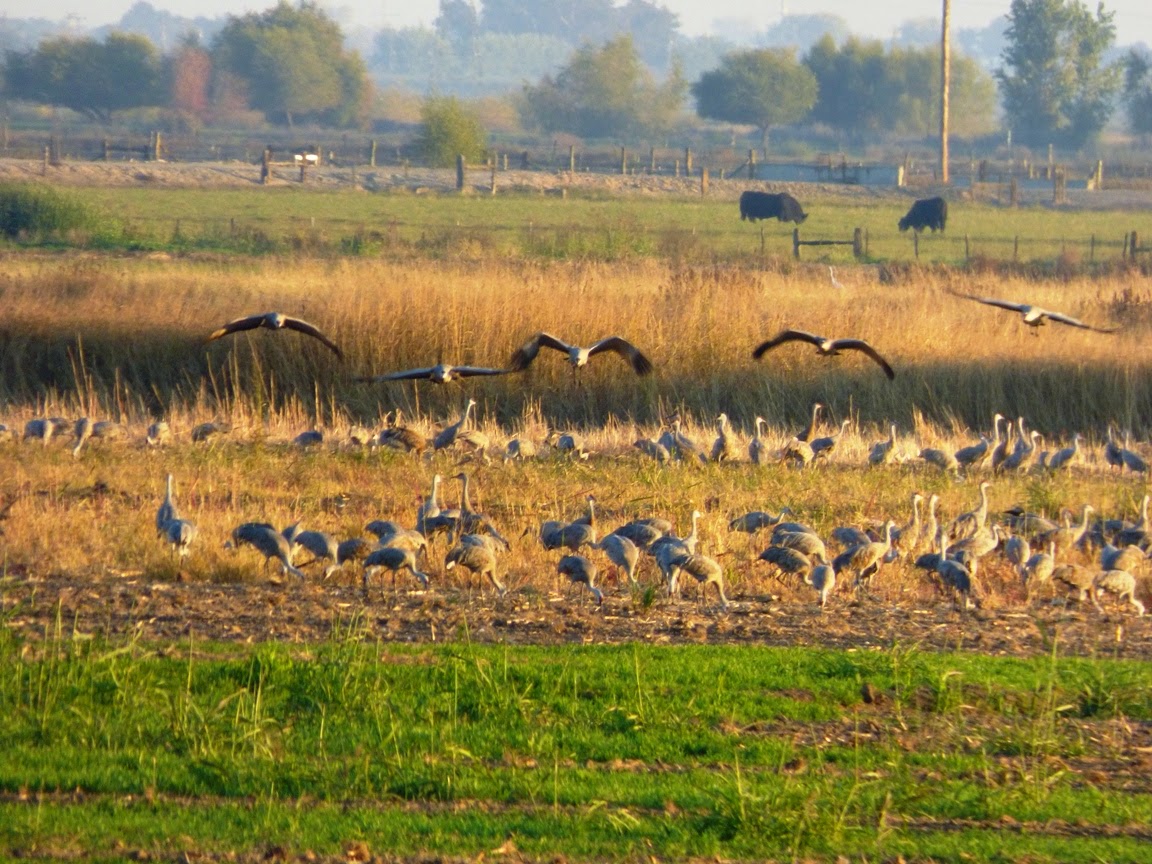 The refuge is also home to thousands of lesser Sandhill Cranes. We could just make out a flock of them in the far distance. Snow Geese also winter in the area. There were five of them among the thousands of Cackling Geese yesterday, looking mildly confused. They usually arrive in large numbers in late November or early December.
As we were standing and watching the flocks there was a tremendous BOOM, and thousands of the geese immediately took flight. A huge dust plume over to the west revealed where the explosion had come from. And why. 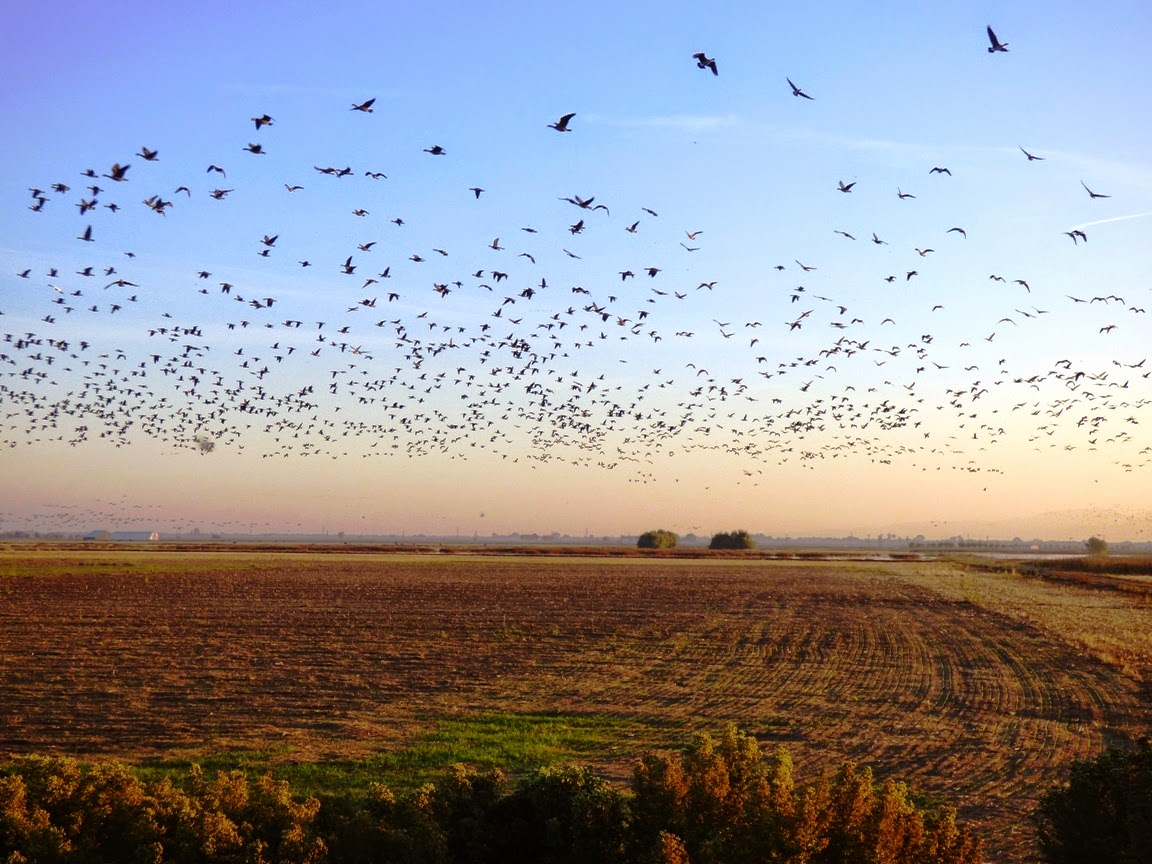 It was a huge net. Several dozen of the birds had been trapped and for the next few minutes we could see Fish and Wildlife employees tagging them. 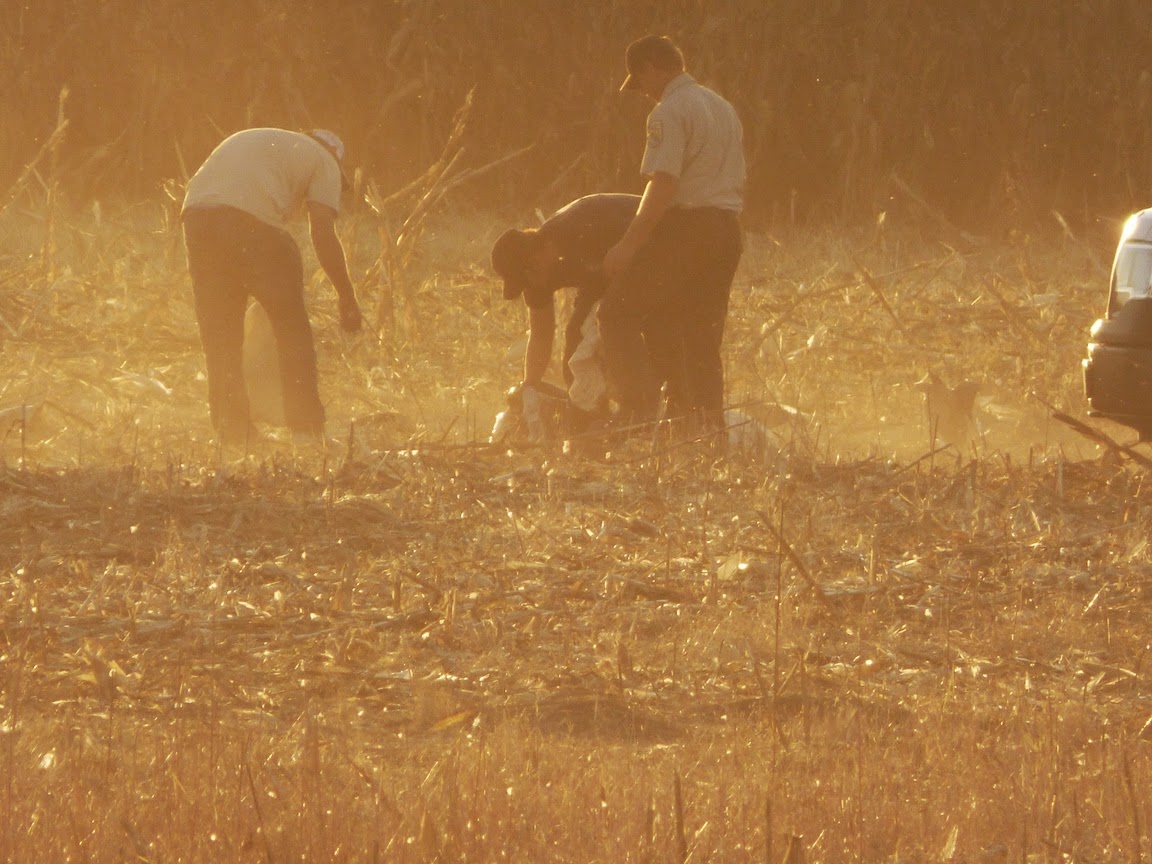 As usual, the picture quality from YouTube sucks (the compression process I suppose), but you can get a sense of the cacophony of sound from the flying geese from the short video below.

I love the colors of those geese in the grass--lovely lighting. And that's super cool you got to see USFWS in action. Thank you for the great reminder to start bugging DH re: when we're going to our local wildlife refuge, a GREAT thing about winter is the wonderful birds in wildlife refuges. Hooray! =)