Dinosaurs, Volcanoes, Monsters of the Deep, and Other Stories Told by a Pile of Rocks. And Disneyland. 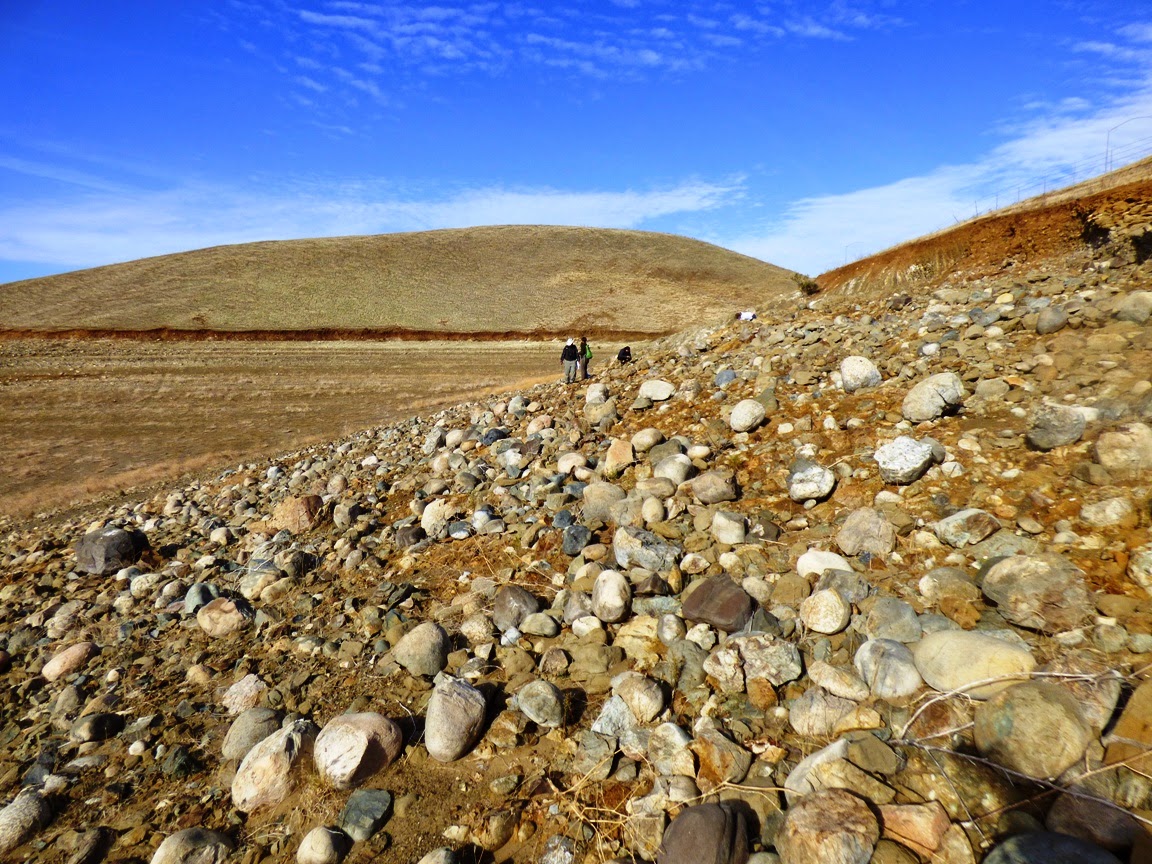 One of my most vivid childhood memories was Southern California Gas Company's Disneyland Night. My dad worked for the company at the time. Once a year the company rented Disneyland and practically every employee and their family showed up. It's hard to explain why this is so extraordinary, but let me try. Have you ever heard the expression "E ticket ride", referring to an event almost too exciting to bear? Disneyland used to require the purchase of a ticket book which was used to buy your way onto the rides. The A, B, C, and D tickets were for the boring slow rides like Storybook Land, It's a Small World, or the Swiss Family Robinson Tree. They were okay, but the E tickets were for the good stuff, mainly the Bobsleds. So why was Disneyland Night so incredible? They didn't dole out tickets that night. You could ride any ride you wanted, as many times as you wanted. For us kids, this was better than Christmas and Halloween combined.

On those long evenings, we would ride every ride possible, and around midnight we would be exhausted. Everything was starting to close up, but there was one last ride we could do...the train. It passed through the diorama of the Grand Canyon and then it passed onwards into the Primeval World. I'm pretty sure that every misconception I ever had about dinosaurs and ancient life was shaped by the scenes that passed before me in that dark tunnel. If you've never had the opportunity, someone (probably many, really) has it posted on YouTube (thank you, Dan Smith):


One of the associations that was imprinted on my mind was the T-Rex battling a Stegosaurus with an erupting volcano in the background. I look at the diorama today and see Apatosaurs lolling in swamps (they didn't), Tyrannosaurs standing like tripods (they didn't), and other misconceptions, but it was always the lavas in the distance behind the battling dinosaurs that I remember so well. So, what possible connection could there be between childhood memories of Disneyland and yesterday's class field trip to the Coast Ranges? Bear with me!

Our first stop of the day was at San Luis Reservoir, a major storage site for the California Water Project. Water is drawn from the Sacramento River Delta and pumped into the reservoir where it is eventually sent south through an extensive canal system. It is the largest "off-river" reservoir in the country. Shoreline erosion has removed the extensive coating of soil, exposing the underlying rocks, a unit known as the Panoche Formation, a complex of conglomerate, sandstone, silt, and claystone that was deposited in Late Cretaceous time, the final years of the Mesozoic, the dinosaur era. 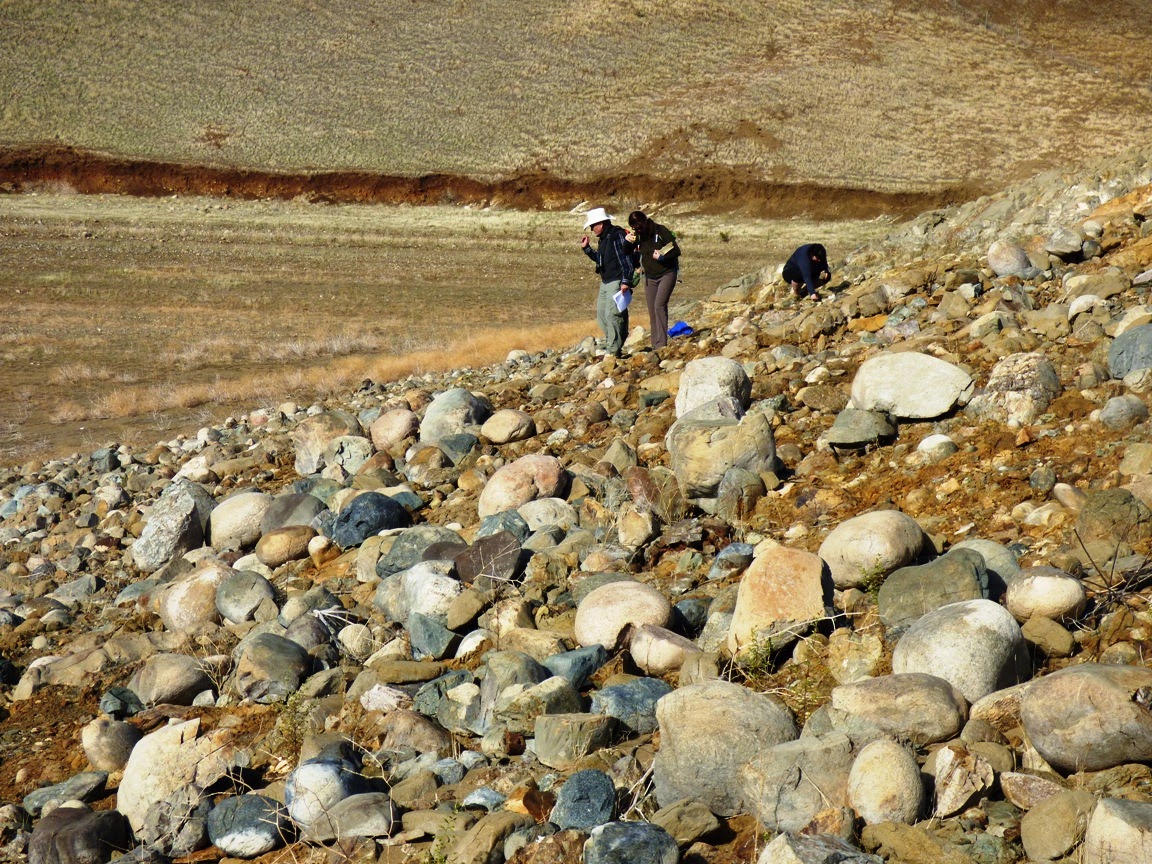 The rocks seemingly defy explanation. They formed in thousands of feet of water, in the forearc basin that developed on the landward side of a vast subduction zone/trench system that existed on the west coast of North America for millions of years. The subduction zone was eventually replaced in central California by the San Andreas fault, a transform boundary between the Pacific and North American plates. The thing about these rocks is that on an ocean bottom one tends to expect to find mud and silt. Sand, pebbles, and boulders don't make sense. There are no strong currents on the ocean floor like there are in rivers. Or are there?

On river deltas and on the edge of the continental shelf where shallow ocean floor gives way to steeper slopes leading to abyssal depths sediments may be shaken loose, by earthquakes for instance. In this situation sediment gravity flows and turbidity currents form, fast-moving bottom-hugging masses of sediment moving very fast into deeper water. These masses are capable of considerable feats of underwater erosion, carving deep submarine canyons into the continental shelf. There are many examples of these along the present-day coast of California, the Monterey Canyon being one of the most famous.

So, dinosaurs and volcanoes? The boulders in the Panoche Formation contain the occasional piece of granite derived from the deep erosion of the Sierra Nevada. The granite cobble is a fragment of what once were the magma chambers for a vast system of volcanoes that would have closely resembled the Andes or the Cascades. Yosemite Valley and the other exposures of granite across the Sierra Nevada were once situated miles beneath volcanoes. In Cretaceous time. Meaning dinosaurs once wandered the flanks of volcanoes right here in California!

That's kind of a stretch, isn't it? Is there actually any evidence of the actual volcanoes? And what about the dinosaurs? 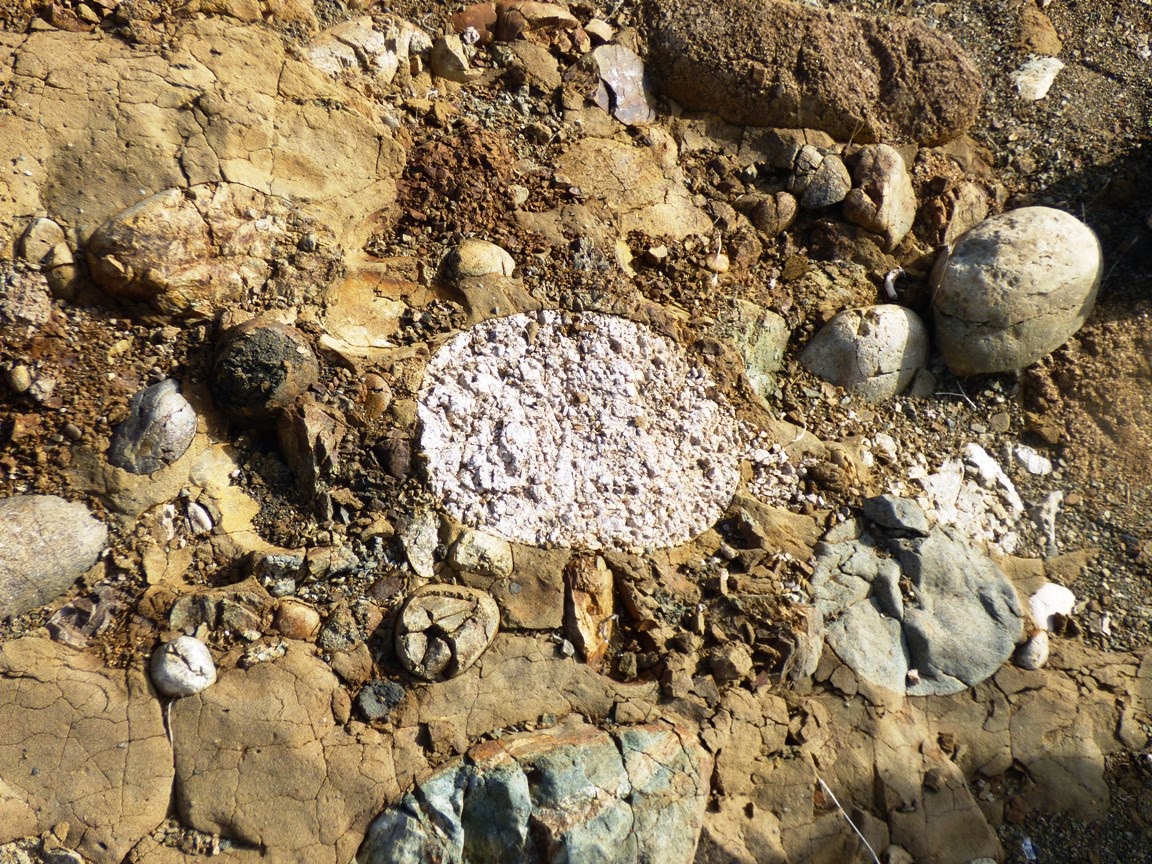 The volcanoes are the easiest to prove. Most of the rocks in the photos above are volcanic in origin. They are the eroded pieces of lava flows that once adorned the summit ridges of the Sierra Nevada much as Lassen Peak and Mt. Shasta do today in the Cascades. It really stokes my imagination to pick up one of these rocks and to realize it started as a mass of molten rock that was erupted onto the flanks of a large stratovolcano off to the east. The lava flow was eventually eroded and removed, the bits and pieces being carried in a river and dumped onto a river delta at the edge of the continent. One day the edge of the continental shelf was shaken by an earthquake, and the chunk of rock disappeared into the depths, carried along by a turbulent mix of water and sediment. It came to rest on the deep ocean floor. Eventually intense compression folded and lifted up the rocks, and finally a last bit of soil washed away and the rocks were once again exposed to erosion and trampling by the feet of geologists. 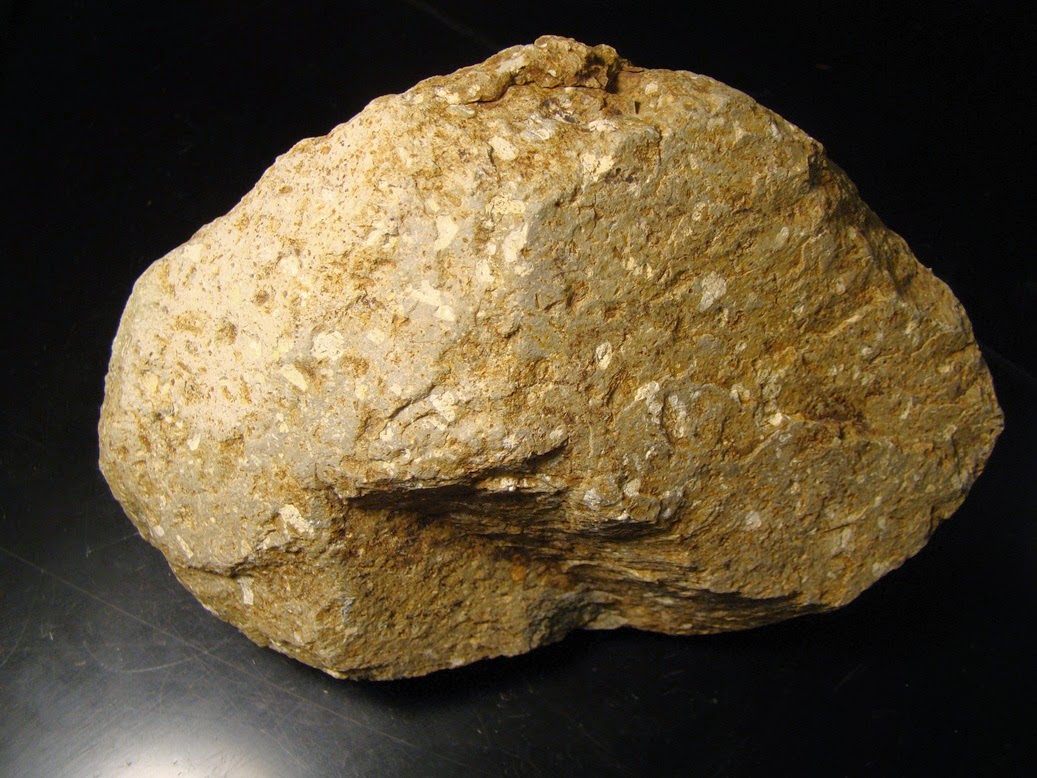 Proving the dinosaurs were here is a bit harder, but it happened. In the 1930s, a young teenager from Gustine was exploring Del Puerto Canyon in the Coast Ranges looking for fossil shells. What he found instead were the remains of a Saurolophus, a duck-billed dinosaur. It was the first dinosaur fossil ever found in California. How much more exciting can that be? The dinosaur was apparently drowned in a river flood, and the carcass floated out to sea where it eventually sank to the seafloor. 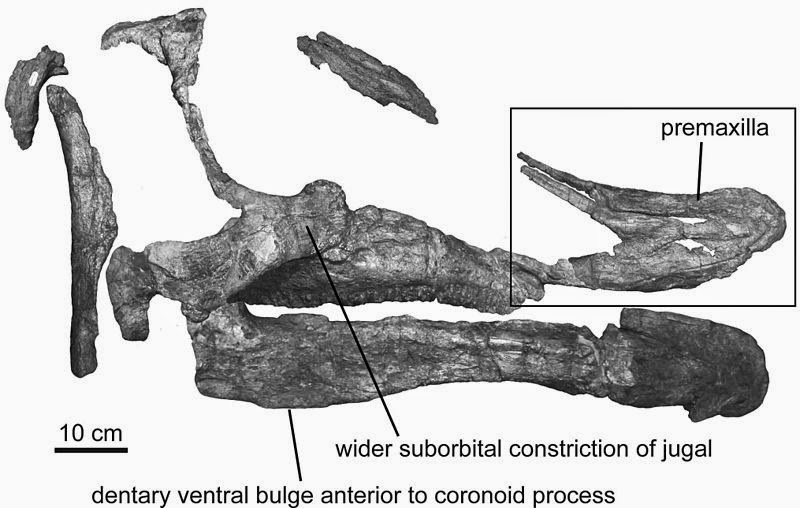 The great thing is, the fact that you can find an occasional dinosaur bone in these hills isn't even the best thing one can hope to discover. There were other creatures living in the sea, and they were terrifying. Al Bennison, the boy who found the dinosaur, also eventually discovered the remains of a Mosasaur. 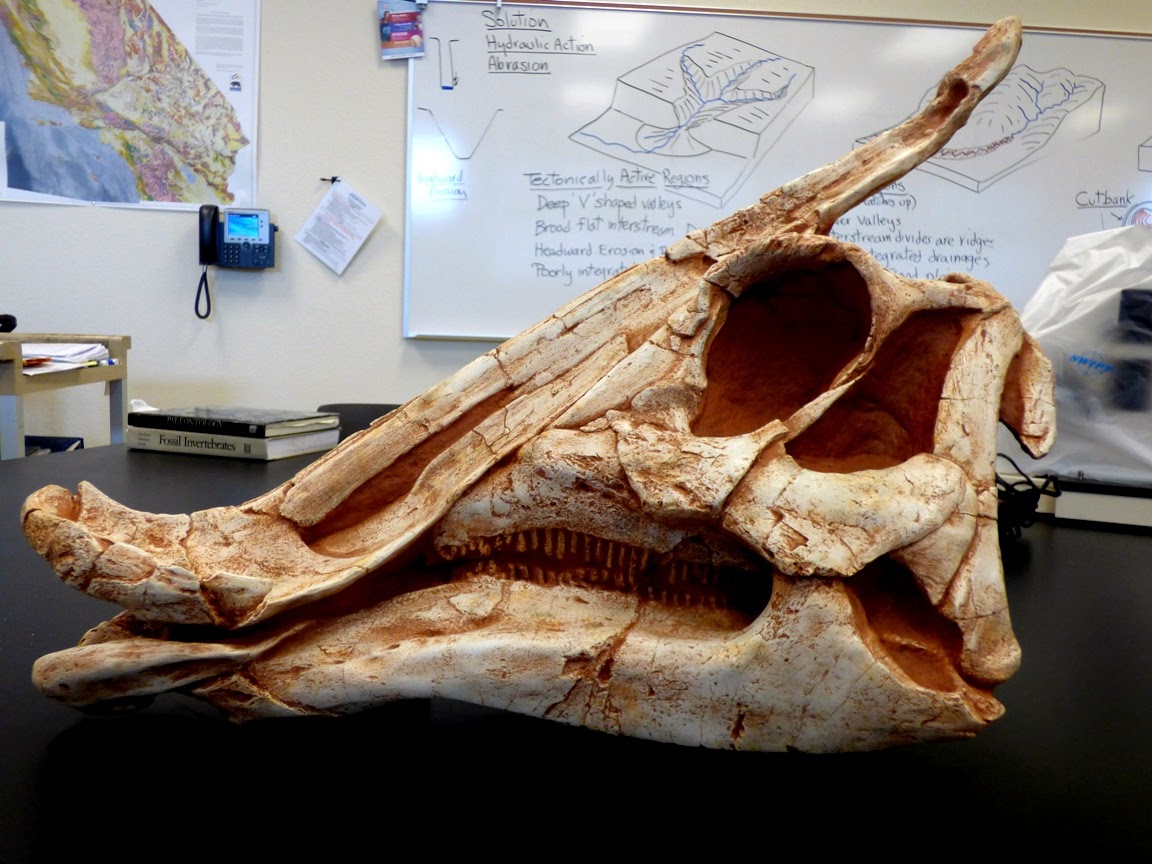 The Mosasaurs were relatives of the varanid lizards, a group that also includes the Komodo Dragons that still live today in Indonesia. They were fearsome marine predators, swimming with flippers instead of clawed legs, perhaps even attacking and consuming sharks (or unwary geology professors). They reached lengths of more than 30 feet. 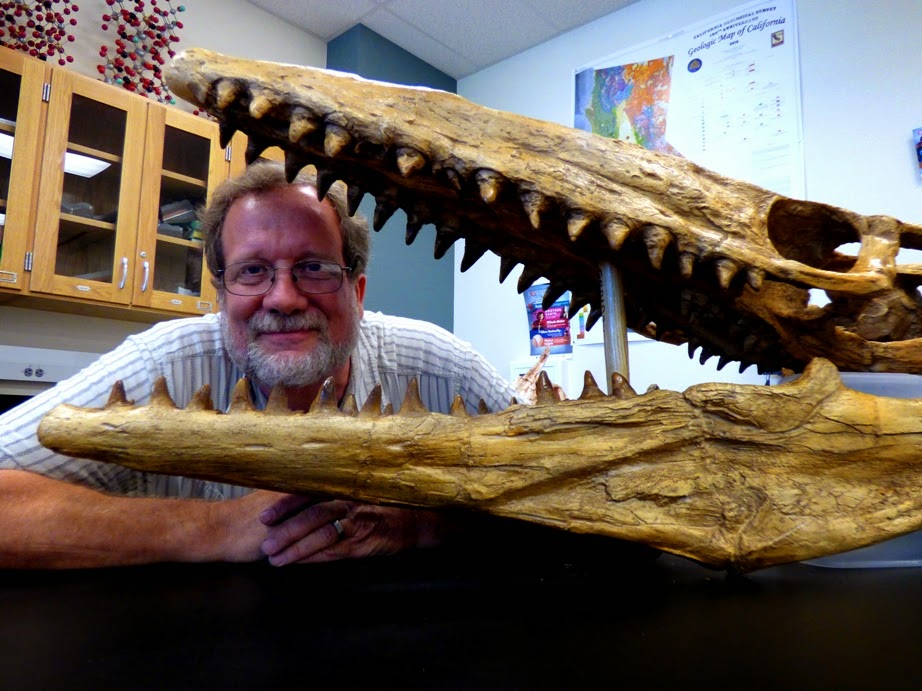 And that is the story told by a pile of rocks along a nearly empty reservoir in central California!

For a description of some recent research on the conglomerates of the Panoche formation check out: http://www.searchanddiscovery.com/abstracts/html/2013/90162pacific/abstracts/green.htm
Posted by Garry Hayes at 1:19 AM

You make me want to visit the reservoir while the water's still low.