If These Cliffs Could Talk: A Sentinel People Sometimes Miss in Yosemite 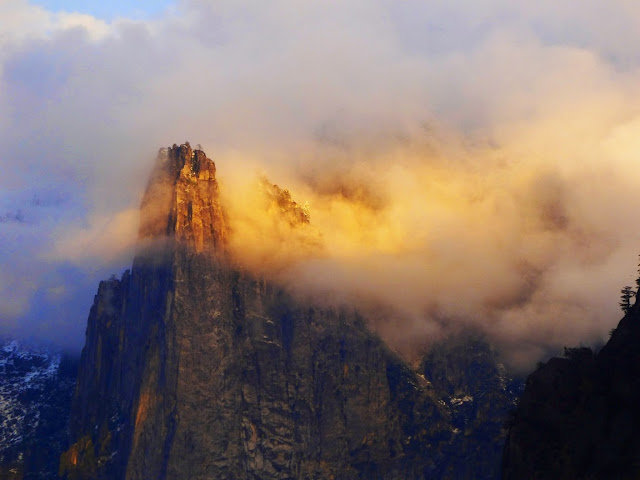 If you saw this picture out of context, perhaps in the opening frames of an adventure movie, you might think of this cliff as being an otherworldly precipice full of allure and mystery. Maybe dragons perch on its summit, maybe buried treasure lies in a cave at its base. It's an incredible rock tower. 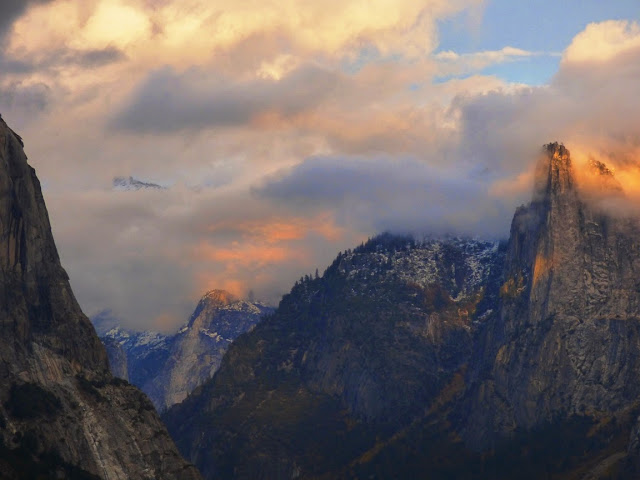 To back up and look at this cloud filled world from a distance takes away none of the mystery. Here is a spectacularly deep gorge with dark forested slopes and vertical rock cliffs. What kind of place is this? Who's been keeping it such a secret? Shouldn't it be a national park or something?

Well, actually it is, and upwards of four million people look at this cliff tower every year. They just don't quite see it as it gets lost in the multitudes of other more iconic cliffs like Half Dome, El Capitan, and Cathedral Rocks. Half Dome would be in the picture above were it not for the clouds.

We are looking at Sentinel Rock, and it is the hard-to-see tower in the dead center of the picture below. Can you see how easy it is to lose it in the grandeur of the cliffs that surround it on all sides? I was taking advantage of the cloud cover to get a photo from Tunnel View that highlights the cliff.
Sentinel Rock is composed of the Sentinel Granodiorite, which was intruded about 95 million years ago, making it one of the younger intrusive rocks exposed in Yosemite Valley.It is a gray colored rock composed mostly of plagioclase feldspar with lesser amounts of orthoclase feldspar and quartz. The black specks in the rock are biotite mica and hornblende. 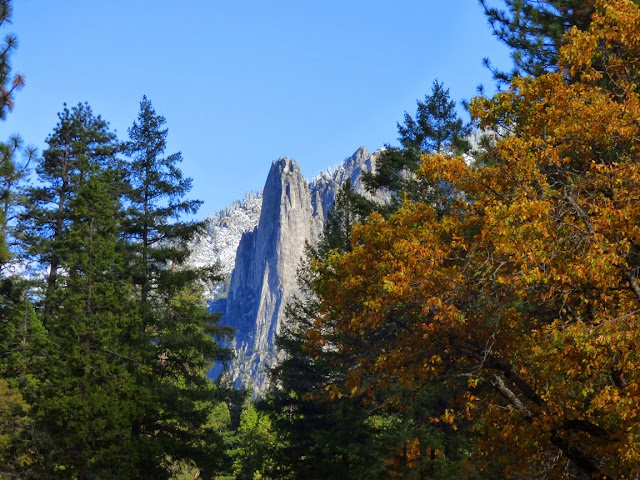 As pointed out in the previous posts of this short series on the cliffs of Yosemite Valley, joints are vertical or nearly vertical fractures that can result from stresses on the rock at shallow depths in the crust. Rocks like the Half Dome granodiorite and El Capitan granite are sparsely jointed and stand as bold cliffs that stand out from the valley walls. The Sentinel granodiorite is somewhat more jointed, so it stands more as a tower than a large cliff. It is surrounded by spires and fissures, including the Taft Fissures that can be accessed by trail above the rim of the valley. 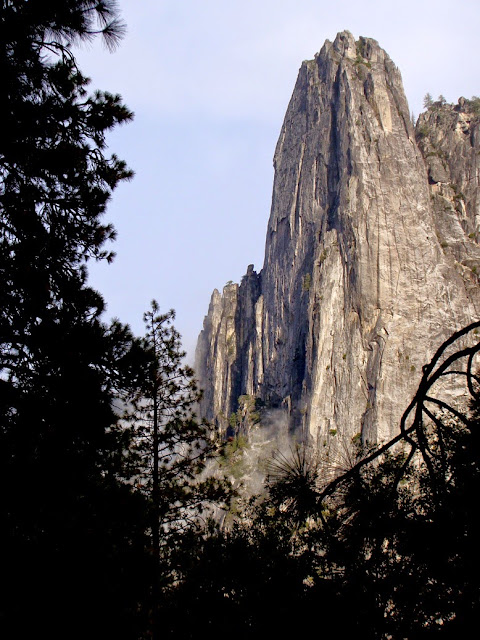 Sentinel Rock soars 3,000 feet above the valley floor with an elevation of 7,038 ft (2,165 m). It is a popular climbing challenge. No trails reach the summit, but the Four-Mile Trail to Glacier Point winds across the slopes below. There is a separate peak called Sentinel Dome behind the rim above Sentinel Rock that is a popular hiking destination. 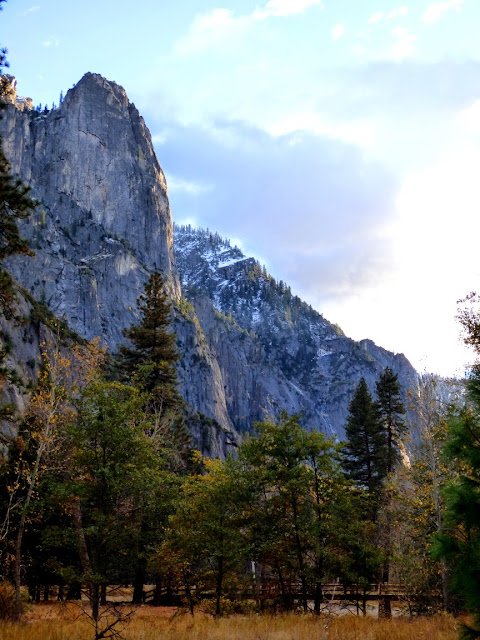 Sentinel stands out in the boldest relief when viewed from Cook Meadow where most everyone stares at Yosemite Falls directly across the canyon. If you are ever lucky enough to visit Yosemite and are standing in awe below the falls, don't forget to look behind you! 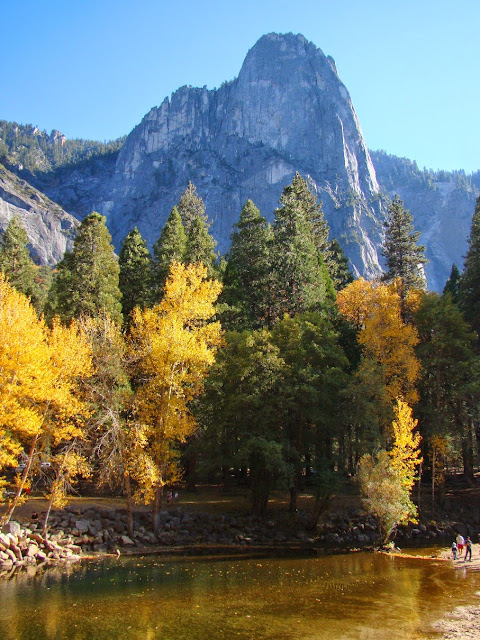 There are several other pullouts on the valley loop road that offer good viewpoints, especially with the Merced River in the foreground. If you've been up the Four-Mile Trail or the trail to Yosemite Falls, I'd love to see some of your pictures! I hate to say it, but I've been halfway up the falls trail, snapping pictures right and left, but I didn't get a single shot of Sentinel. Half Dome, yes. Yosemite Falls, upper, middle and lower, yes, selfies, yes, but no Sentinel. It hides in plain sight. 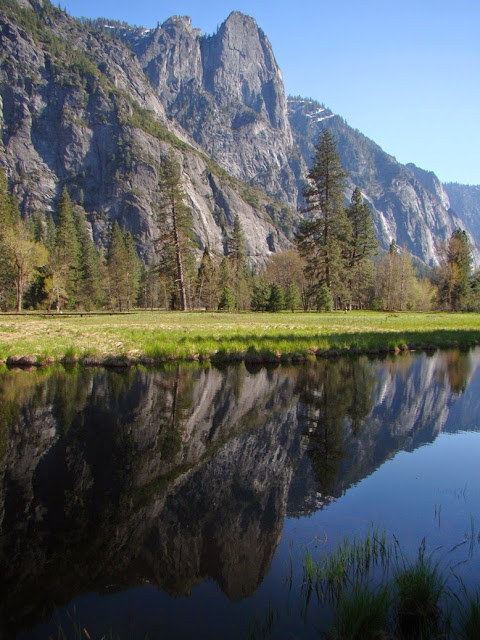 A wonderful rock!
Posted by Garry Hayes at 6:40 PM