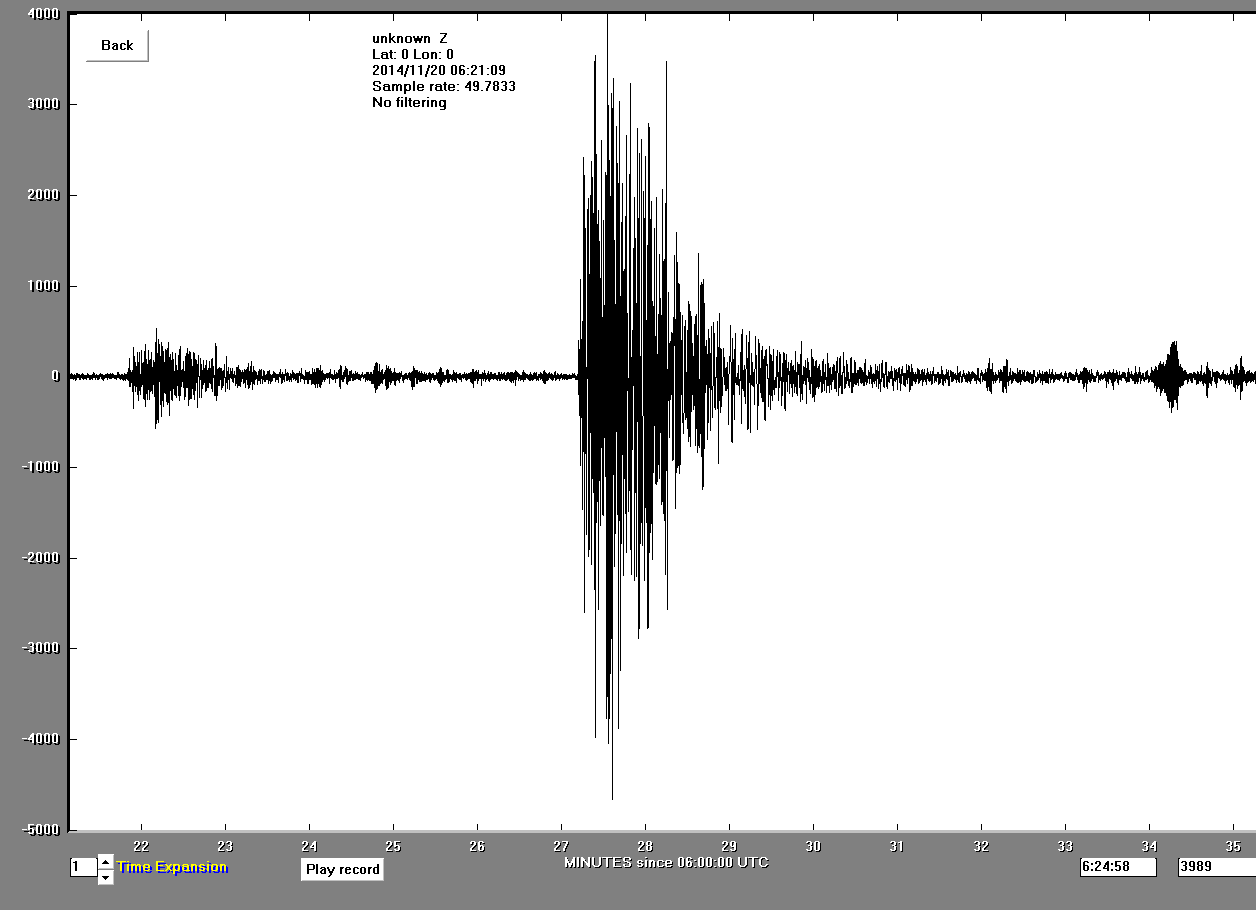 We have a simple classroom seismometer installed on the third floor of our Science Community Center at Modesto Junior College. It nicely captured the two earthquakes from San Juan Bautista that took place last night just five minutes apart. In the record above you can see the 3.6 magnitude foreshock on the left side, and the larger 4.2 magnitude quake in the center. This seismogram nicely illustrates the vast difference in the size of the two quakes. In terms of energy release, a magnitude 4 quake is about 32 times more powerful than a magnitude 3. So the 4.2 quake is many times larger than the 3.6 (can a seismologist out there do the calculation?), which is obvious from the graph above. The 4.2 was not just a little bit bigger, it was huge in comparison.

I isolated the magnitude 4.2 and "stretched" it out. One can see from the horizontal scale that the vibrations continued for two or three minutes at our location. The quake would have been a few quick jolts near the epicenter, but the unit is far more sensitive than humans are. The really big quakes can  reverberate for hours. 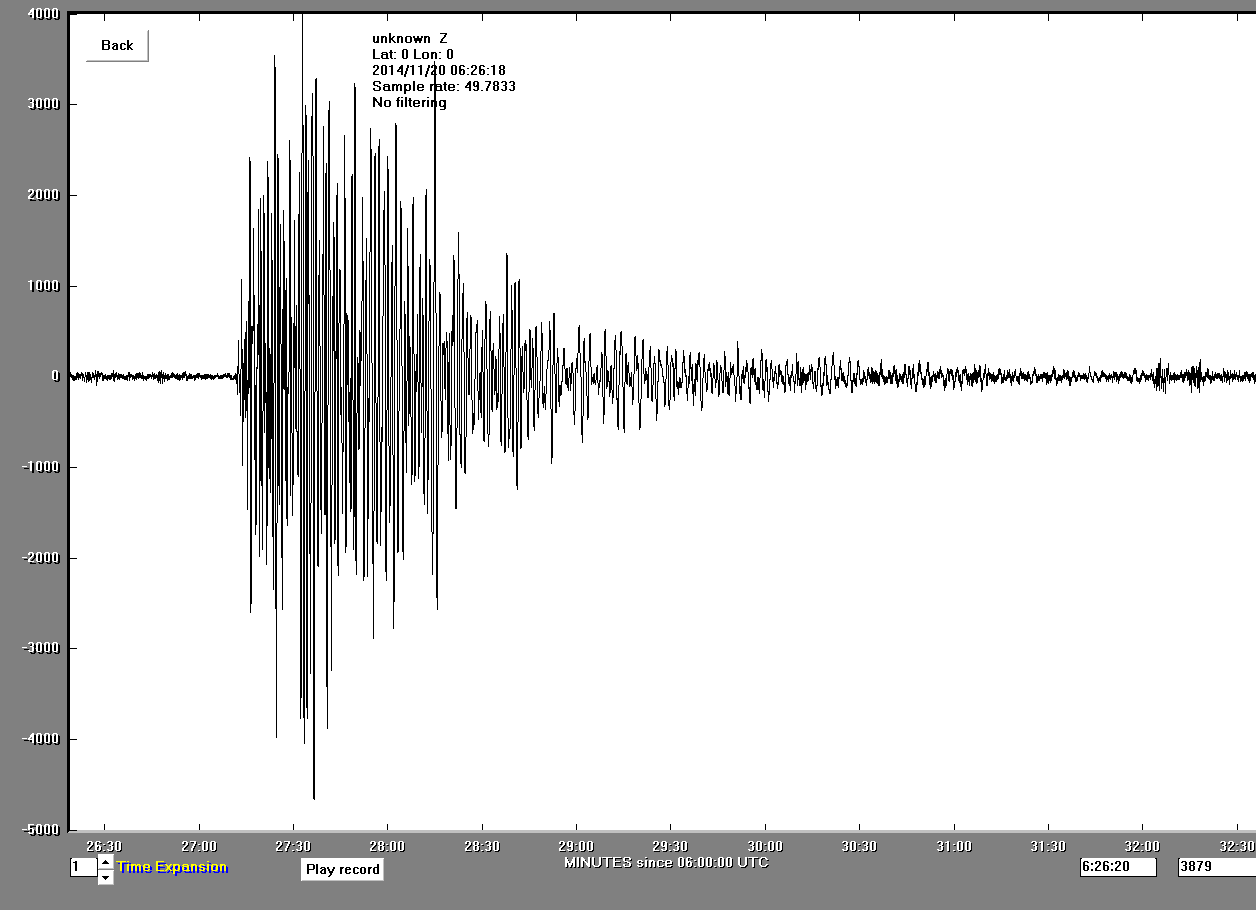 The unit is an EQ-1 Seismometer from Next Generation Science. It uses a suspended magnet in near contact with an electronic coil. Vibrations are recorded electronically and converted to digital signals on the computer which can be manipulated to bring out details of the individual quakes. In the few months I've had it installed, I've recorded California quakes in the range of magnitude 3.5-6.0 (the Napa quake). It has also captured magnitude 7 and larger events worldwide. 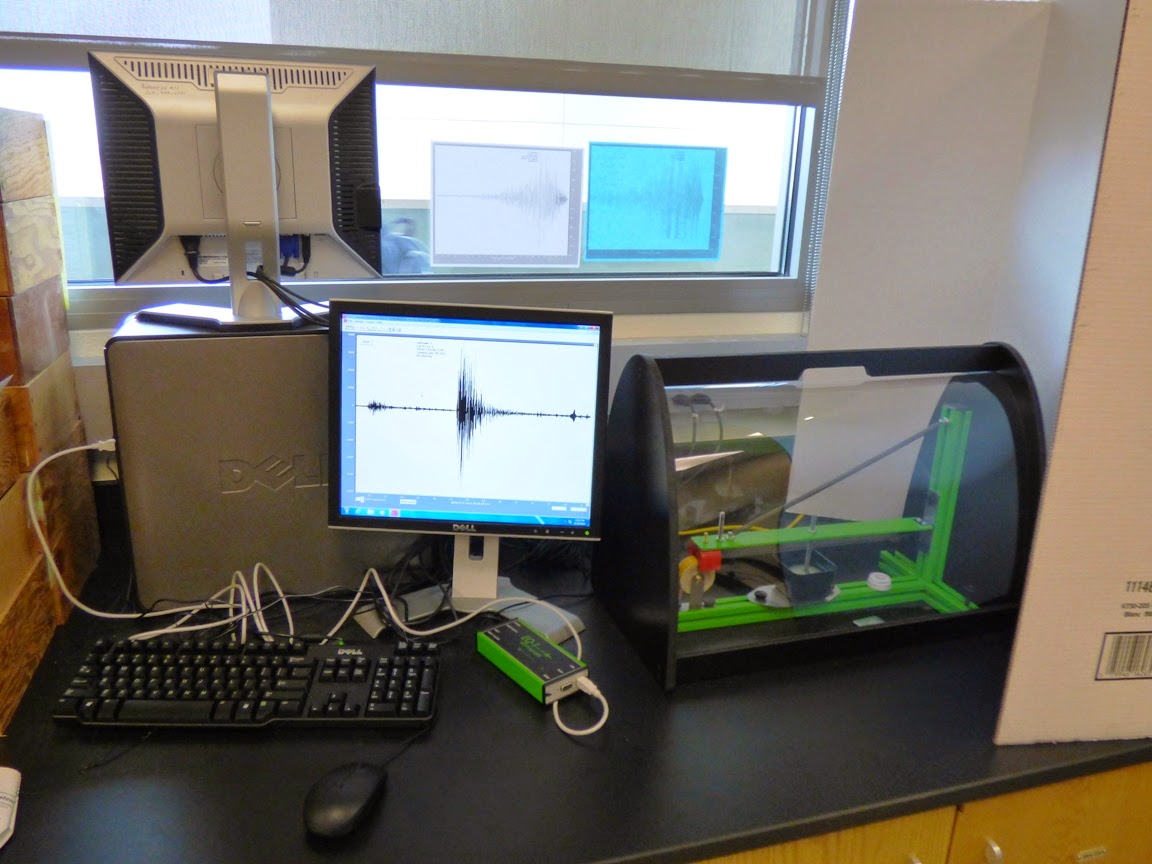 The unit shouldn't really be on the third floor of the building, because it catches all manner of foot traffic, trains and traffic. On the other hand, what a great teaching tool. I've used a signal splitter to put a second monitor in the window with some interpretive notes. I've had any number of people who've stopped by to jump up and down, creating their own little earthquakes (about magnitude -2, I understand).
Posted by Garry Hayes at 2:21 PM

Am I right, anyone?


The USGS has a quick calculator here: http://earthquake.usgs.gov/learn/topics/calculator.php