The Abandoned Lands...A Journey Through the Colorado Plateau: I've looked at erosion from both sides now 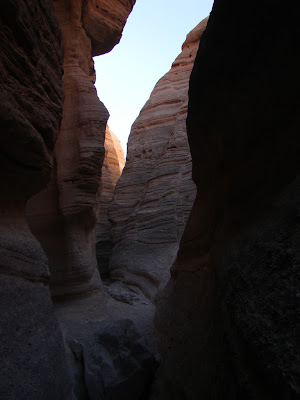 I guess I will never be a songwriter for Joni Mitchell. But I like looking at the effects of erosion. Sometimes you see it from above, for instance by standing on the rim and looking into the depths of the Grand Canyon. Sometimes you see it from below, by walking through a place like the Narrows of the Virgin River in Zion National Park and looking up at 2,000 feet of sandstone walls. But sometimes there are places where you get to look at erosion from both sides. 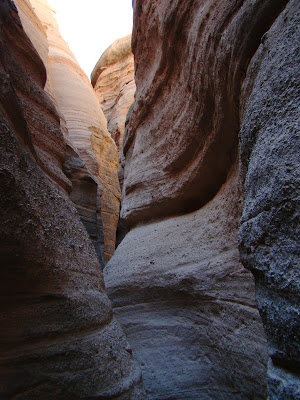 That's where we are today, a wonderful trail that takes us first through a narrow slot canyon, and then climbs to the mesa top above for a look down into the depths. This is the next stop on our journey through the Abandoned Lands, the desert environment of the Colorado Plateau. It's probably not all that fair of a quiz, but who can tell us where we are today? It's a place that receives relatively few visitors despite the incredible scenery. There was only one other car at the trailhead before our six vans showed up. A few clues about where we are... 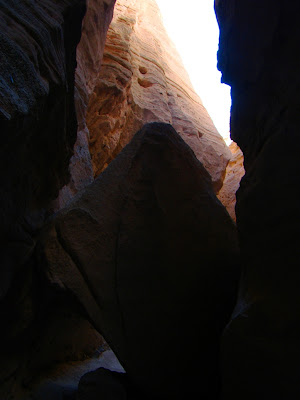 Notice the rocks in the walls of the canyon. It isn't the nicely sorted sandstone that we often expect when water has carved such narrow slot canyons. This is more of a conglomerate with larger chunks of rock embedded in a matrix of smaller clasts. Some of the rocks are huge, as can be seen where large boulders have fallen into canyon. The rocks contain lots of volcanic material, including obsidian fragments that are sometimes called Apache tears ("Apache" is not a clue, though). 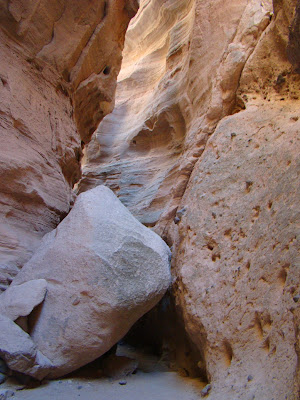 I guess I should also admit that a nitpicker would argue that we aren't actually on the Colorado Plateau, being on the edge of the plateau on the margins of a rift valley. The lower valley provides enough of a difference in base level that erosion is very, very fast, so fast that canyon walls can't collapse fast enough to make gentler slopes. 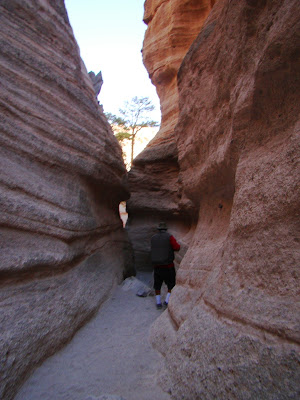 How bad can flashfloods get here? We certainly didn't want to find out. In the picture below, the students are looking at some silt deposits in a hollow about 12 feet above the floor of the gully. That was the water level during a recent gully-washer. If you are caught in such a flood, there wouldn't be much you could do to save yourself. By the way, notice that a fault line cuts across the cliff face in front of the people. 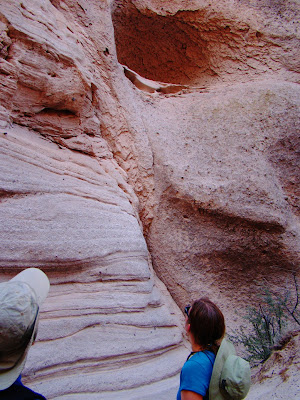 How fast is the erosion in a canyon like this? The trees give us a clue. How old do you think the ponderosa pine might be in the picture below? It's rather tall, and has probably been growing for a century or more... 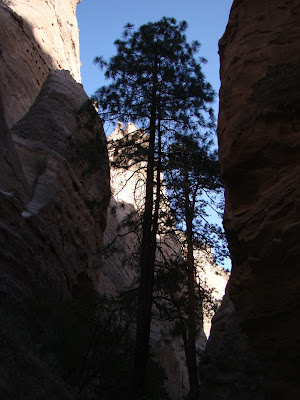 Look what has happened around the roots.... 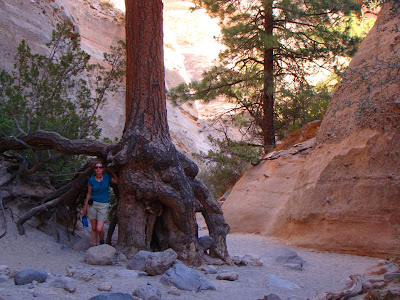 In the next post we will look at this place from above, and provide the answer if some of you don't figure it out first.
Posted by Garry Hayes at 10:46 PM

Wild looking root system. Kind of reminds me of the Bryce area, but I believe your are further south.

Garry, Besides being the grammar police, I haven't figured out where you are AT yet. tsk tsk!

I don't remember that tree from anywhere in Zion...And it looks like it might be somewhere in the Grand Staircase GSENM but that isn't on the edge of the plateau.

Cant wait to find out where it is!

This is Kasha-Katuwe Tent Rocks National Monument in New Mexico between the huge Jemez caldera and the beautiful and awesome Rio Grande rift valley.

Beautiful photographs, fantastic face of the nature. I am greeting