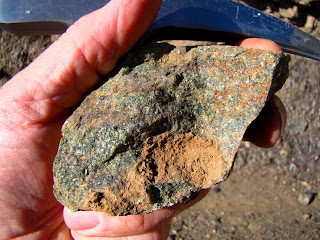 There aren't many places where you can drive into the Earth's mantle. It is the 1,900 mile thick layer that constitutes something like 80% of the volume of the planet, but on the continents it lies hidden beneath many miles of crust. We've never drilled into it, so getting to it isn't easy. Unless you live near California's Coast Ranges or Klamath Mountains. In these places, fragments of the mantle have been brought to the Earth's surface.  The rocks of the mantle are described as being ultramafic, and they are beautiful. They are literally composed of gemstones: lots of olivine (peridot), as well as bronzite pyroxene, diopside and other unusual minerals. They are valuable in other ways, as ultramafic rocks serve as ores for chrome, mercury, magnesium, platinum, nickel and other rare metals. 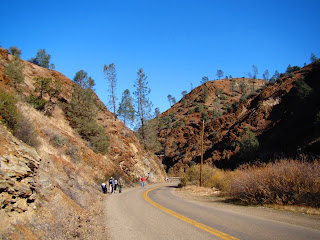 It was an interesting day. The geology club at our college decided on Del Puerto Canyon in the Coast Ranges near Patterson as the destination for their field trip this semester, so 19 intrepid explorers set out to explore the mantle. The journey starts as we drive down-section through 25,000 feet of ocean sediments of the Great Valley Sequence, the same sediments we live on back home. We can do this because they have been tilted to near vertical angles. That's that equivalent of driving to the top of the Himalayas, only going the opposite direction, into the Earth's interior. 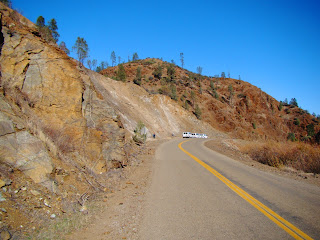 About ten miles up the canyon we cross the Tesla-Ortigalita fault and enter the Coast Range Ophiolite, the volcanic and intrusive rocks that represent the oceanic crust on which the Great Valley Sequence sediments were laid down. We encounter dikes, pillow basalts and gabbro plutons as we drive farther up the canyon (and "into" the crust). Finally, just beyond Frank Raines OHV Park, we find the rocks of the mantle. Most of these rocks on the long journey to the surface are altered into serpentine, California's State Rock (there was a bit of a ruckus about our state rock last year in the media and legislature).

But not all of the rock is turned to serpentine. In the upper reaches of the canyon, a mass of rock several miles across was pushed to the surface without quite the degree of metamorphic change, and as such it preserves some of the original minerals and textures of the mantle rock. We found some very nice samples of the chromite ore (below), a heavy metallic mineral that occurs in small grains within the ultramafic rocks. 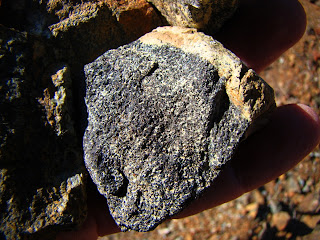 We could also see where alteration was starting to affect the rock, releasing magnesium into hot water solutions that later formed magnesite, which also was mined here during the World Wars. The "ma" in "mafic" refers to magnesium, and the "fi" refers to iron. Can you see any clues that there might be large amounts of iron in the rocks below? Or why the entire region is referred to as the Red Mountain Mining District? 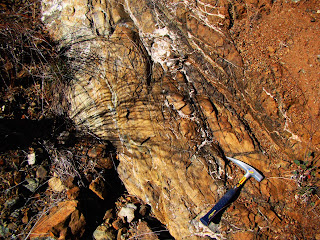 The rocks also provide clues as to how these rocks traveled the many miles from the depths of the Earth to the surface. Marks on the rocks called slickensides are the scratches and striations where the rocks were ground into each other and sheared on the way up along fault zones. 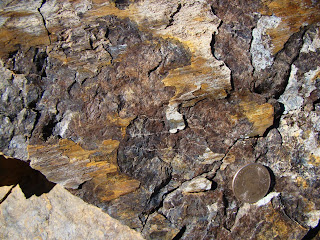 I've been up Del Puerto Canyon a few dozen times over the years, but I rarely have time to explore. We usually come up with a laboratory class and our time in the canyon is severely constrained. On this day we took our time and wandered widely, and I discovered something new this trip. The peridotite we usually see at the chromite mine is very fine-grained and almost black. Except in a microscope, the beautiful olivine crystals are practically invisible. On this trip I wandered further up the canyon than normal, and rock hammer in hand I picked at the deeply weathered red rocks. One outcrop was unexpectedly tough. I pounded all the harder, and the rock split to reveal sparkling green crystals of olivine, larger and purer than any I've ever seen in Del Puerto. It was a beautiful rock, and all the more interesting when one considers the journey the rock has made from the depths of the planet. 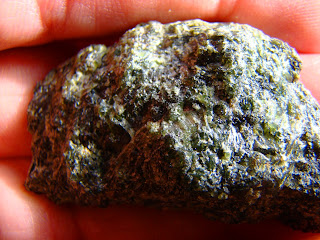 As the day ended, we jumped back into our Miss Frizzle's Magic School buses (ok, white school vans) and headed back up to the surface of the Earth, and the Starbucks in Patterson.
Posted by Garry Hayes at 12:13 PM

Nice specimen! You make me want to go again.

I lived in Dunsmuir for a few years. Reminds me of the exciting rocks you can find in those parts.

we love going as a family rockhounding and looking for fossils in coastal central california. we even found a sandcast of a whalebone once.

I love Del Puerto Canyon, but the only time I've really explored it I was working alone on a school field exercise trying to map contacts between rock units. I spent 75% of my time trying to figure out where I was on the map. It's confounding (to me, at least) to try to drive and navigate a map at the same time.

Next time I visit, I want to just explore the rocks and really *see* them, and preferably do it with a friend; two see much more than one.