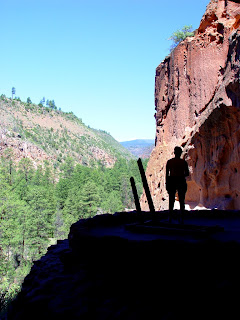 Monday geo-pictures (for busy geo-bloggers; what a great idea, Georneys)...here is another scene from the southwest, this time at Bandelier National Monument. The monument preserves ancient pueblo cliff dwellings and villages which are fascinating in and of themselves, but the scene is made even more interesting because of the geological setting. Bandelier sits on the flank of the gigantic Jemez (Valles) caldera, which covered the region with red-hot ash around 1.15 million years ago. The pueblo people found the ash cliffs easier to excavate than sandstone, and numerous holes pockmark the cliffs representing the rear rooms of the dwellings.

The kiva in this photo required a 140 foot climb to reach (mostly on ladders). It takes some imagination to understand the effort undertaken to live in such an inaccessible place.
Posted by Garry Hayes at 10:50 PM

I can't believe I haven't been here yet.