Geo-picture-a-day week continues with Thursday's offering: little-known Kasha-Katuwe Tent Rocks National Monument in New Mexico's Rio Grande Rift. The odd spires are hoodoos, caused when some kind of boulder or capstone prevented the erosion of the much softer rock underneath. The softer rock in this case is ash and pumice fragments from an eruption of a vent in the Jemez Caldera area about 6-7 million years ago. It is a bizarre landscape that reminds some people of Cappadocia in Turkey, which isn't surprising because the geological history is similar. 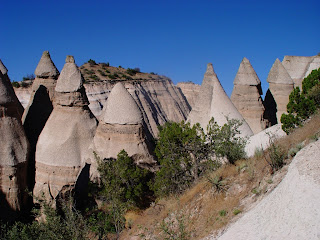 Kasha-Katuwe Tent Rocks National Monument is administered by federal Bureau of Land Management instead of the National Park Service. It is a fascinating place to walk around!
Posted by Garry Hayes at 8:02 AM

Very cool. They look like the lime kilns at Death Valley. Haven't heard of this place before. Thanks.