Dispatches from the Road: Feeling Detached in Saguaro National Park 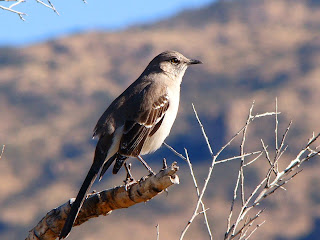 Had a few spare moments from family matters while in Tucson, Arizona today, so we headed out to Saguaro National Park and Tucson Mountain Park, which are both on the outskirts of the city. I'm not overly familiar with the area's geology, so it was a real learning experience. I really wish I had more time here!

The first thing that happened is that this mockingbird got in the way of my picture of the far mountain ridge. There was a beautiful bright red cardinal, too, but I couldn't convince it to block the scenery for me... 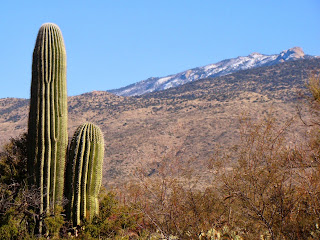 The Saguaro cacti kept getting in the way of the shots of the rocks, too, but I guess they provide some sense of proportion. The mountain ridges in the Rincon District of Saguaro National Park looked vaguely familiar to me, forming a roughly domal shape. 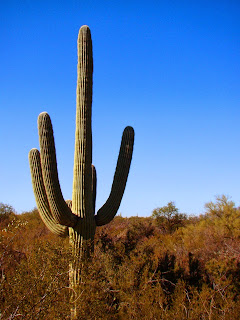 A convenient pull-out confirmed my suspicions...these rocks were reminding me of Death Valley...specifically the Black Mountains on the east side where several detachment faults are prominently exposed. Detachments are evidence of extreme extensional forces in the crust of the Earth. As the younger overlying rocks slip off the underlying ancient rocks, the rocks bow upwards forming the dome-like outlines. Deeply deformed rocks called mylonite are found along the fault contacts 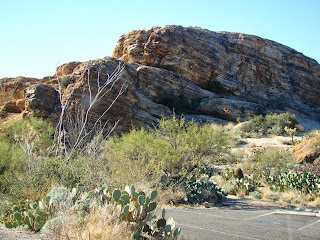 The younger overlying rocks actually ended up on the other side of the Tucson valley. They make up the rocks exposed in Tucson Mountain Park, which we visited briefly while looking for a place to watch the sunset. Much of the rock is volcanic rhyolite, formed during intense caldera eruptions similar to those that produced Yellowstone and Long Valley (in California). The sharply jointed rocks form prominent peaks that do a nice job of catching the last rays of the sun. 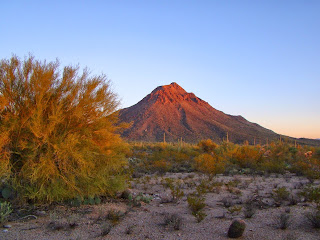 I am almost never disappointed by an Arizona sunset... 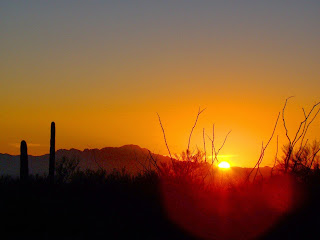 The Saguaros always provide a nice frame for pictures of the sky and horizon...almost a cliche that you've seen a thousand times in calendars, but there is nothing like being there. I couldn't stop snapping pictures, and if I didn't have a camera, I would have sketched. And if I didn't have a sketch pad, I would have scratched images on the rock, much as the original inhabitants of this country did thousands of years ago. It's that pretty. 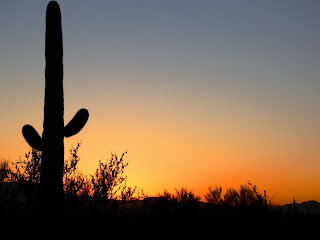 From Gates Pass, the view was stupendous. We watched until darkness, and headed back down into Tucson for dinner. Gotta get some sleep, because tomorrow we are headed to the Grand Canyon! To research the summer field trip, of course.... 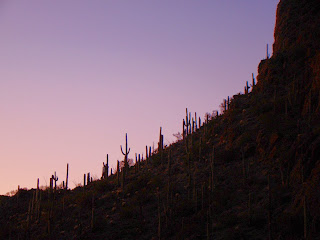 For some information on the geology of Saguaro National Park and the adjacent Tucson Mountain Park, check out this pdf file.
Posted by Garry Hayes at 10:00 PM

Gary,
My high school years were spent in Phoenix. Since then I've lived in Colorado near Denver. I deeply appreciate your pictorial journeys through these areas. And since junior high school I have had a love of geology. Thank you for your efforts on this superb blog.

I visited Saguaro NP and Tucson MP last spring but didn't have near enough time to explore this amazing country.
Dress warm for the Canyon. The South Rim of course.

Garry, Hope you don't mind that I linked my latest post to your post about the Tucson area